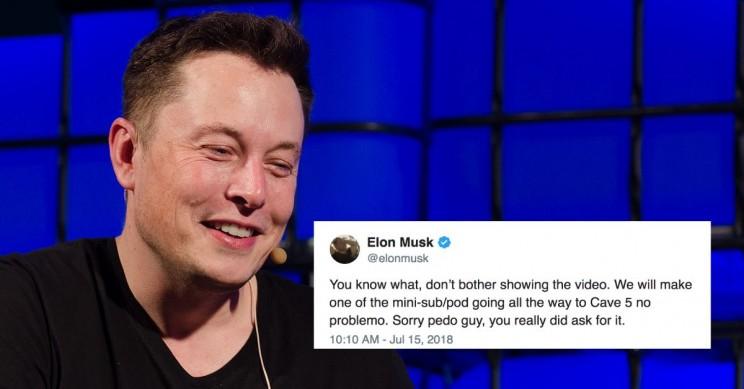 Elon Musk may not know when to leave well enough alone. He's already been recently blasted for a supposedly anti-Semitic tweet. (Apparently asking "Who do you think owns the press?" means you hate Jewish people). Then there was the ordeal with Vernon Unsworth, the British diver who saved the Thai boys trapped in a cave who Musk referred to as "pedo guy" on Twitter. After that rapper, Azealia Banks warned Musk off of tweeting while under the influence of LSD while a house guest of Musk's (now) ex-girlfriend indie darling Grimes. Banks has since apologized for inspiring "fan-fiction" but with Musk reviving his online feud with the British diver (who has been upgraded from "pedo" to "child rapist" at this juncture.

In addition he referred to Unsworth's girlfriend as a "child bride." She has taken offense at his claims and points out she is, in fact, 40. Unsworth's sister, Shirley O'Connor has strongly implied there will be legal action. Musk seems to be welcoming it:

"I suggest that you call people you know in Thailand, find out what's actually going on and stop defending child rapists, you f** a**hole."

"He's an old, single white guy from England who's been traveling to or living in Thailand for 30 to 40 years, mostly Pattaya Beach, until moving to Chiang Rai for a child bride who was about 12 years old at the time. I f** hope he sues me."

These aren't even the biggest issues facing the CEO of Tesla and SpaceX. According to rumors set ablaze by the Grimes/Banks fiasco, it was Musk's newfound love of marijuana that led him to decide to round up to $420 per share. As a result, trading was paused by the Securities and Exchange Commission. This on top of rumors of pump and dump, rumors that Tesla was involved in drug trafficking, multiple allegations of securities fraud.

For years many have referred to Elon Musk as the real-life Tony Stark but with all the rumors abounding and the attacks in the media being met with an attack on the media he may be just as much Howard Hughes as Iron Man.

Musk has got guts….

I believe him, he's not a stupid guy!