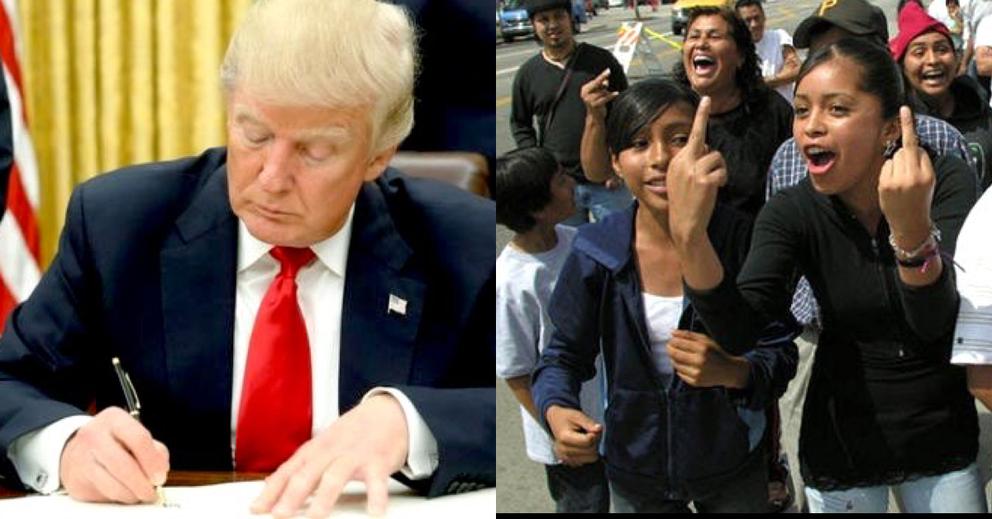 The Immigration and Customs Enforcement agency (ICE) has brought countless criminal enterprises to an end after it successfully completed a 30-day long, six-state raid arresting a whopping 364 illegal aliens - 187 were previously convicted felons.

<strong><span style="color:red;">The hotbeds of criminal illegal aliens rounded up by the ICE raids included these six states and their total arrests:</span></strong>

The efforts of ICE and ERO were enormous victories during their 30-day enforcement action, which ended on Friday.

Out of a total 364 illegals that were arrested, 236 were from Mexico, making the need for the border wall continuing to grow.

54 illegal aliens came from Guatemala and 40 from Honduras, all of which somehow made it into the country illegally.

All of the Special Agents involved were working under the Trump ICE Chicago center, which oversees the six-state region, where 71 fugitives with already existing deportation orders were caught.

97 more who illegally came to the country after they had been deported are facing possible federal charges for illegal re-entry.

According to ICE, over half of all arrested illegal aliens were previously convicted of serious crimes.

The Enforcement and Removal Operations (ERO) unit detained a total of 18 women, and 346 men, from 25 countries during the 30-day raid, ICE stated in a press release.

It comes amidst President Trump's demands to Congress to fund his proposed border wall to keep Americans safe. The Democratic Party has refused to agree to such, all while Americans are being killed.

Some wrongfully claim that “the Republicans are in control,” but they simply do not have the votes to push the border wall through yet.

Just this week, The Goldwater reported two cases, one that will blow the minds of the public in Florida, a barbaric scene in Texas, and another being a widespread ICE victory in Texas.

In Florida, <a href="https://thegoldwater.com/news/36299-Polk-Sheriff-Illegal-Alien-Arrested-for-Rape-of-8-Year-Old-Girl-in-Florida"> Polk County Sheriff Grady Judd announced the arrest of a 29-year-old illegal</a> in connection with the graphics and sadistic rape of an innocent 8-year-old girl.

71 of those arrested were fugitives from ICE deportations, and the total of 97 others illegally re-entered the United States after having been previously deported, which is a felony.

Depending on their an alien’s criminality, an alien who re-enters the United States after having been previously deported can be sentenced for up to 20 years in federal prison, if convicted of subsequent felonies.

Following are criminal summaries of sis-total offenders arrested in the ICE Chicago area of responsibility during this operation:

He is a convicted felon for attempted murder. He remains in ICE custody pending his removal.

Earlier this year, he was convicted of domestic assault. He also is a convicted burglar. He remains in ICE custody pending removal proceedings.

He is a convicted felon for rape and was previously removed; he later illegally re-entered the U.S.

He was convicted of criminal sexual abuse on July 30. He remains in ICE custody pending his removal.

He is a convicted felon for rape. He remains in ICE custody pending his removal.

He is wanted in Louisiana for child rape charges. He remains in ICE custody pending his extradition to Louisiana.

He was arrested earlier this month for distributing child pornography. He remains in ICE custody pending his removal.

“Operations like this reflect the vital work our ERO officers do every day to protect our communities, uphold public safety and protect the integrity of our immigration laws” ICE Chicago Director Wong said. “We will continue to devote the full efforts of our agency to protecting citizens and enforcing federal immigration law. Communities are safer today because of the hard work was done by the men and women of ERO.”

ICE deportation officers carry out targeted enforcement operations daily and nationwide as part of the agency’s ongoing efforts to protect the country, uphold public safety, and protect the integrity of our immigration laws and border controls.

These aliens are evaluated on a case-by-case basis, and, when appropriate, they are arrested by ICE officers.

<b>This was an enormous victory by ICE, and we're appreciative of their bravery. Thank you!</b>

How much do you suppose it will cost to house, feed and eventually incarcerate all their babies?

We need to get rid of the faggots too

Notice how tight the Protester photo shots needed to be, to make it appear it was a large crowd of protesters?

10 to 20 does not make a movement just a Kum-Bi-Ya gathering of a few Star-$$$ or lets GO-PROTEST people.