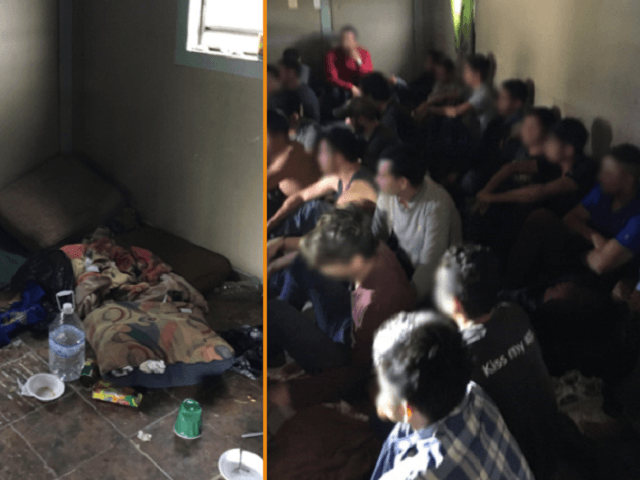 Special Agents from Customs and Border Patrol in the Rio Grande Valley area of Texas say they've shut down a major human trafficking syndicate which led to the detainment of 40 illegal aliens.

McAllen Border Patrol, McAllen Police, and the Hidalgo County Constables Office all participated in the operation.

Authorities said that over prolonged period agents were monitoring stash houses in the Mission, Texas area that had heavy traffic coming to and from the residences.

Assuming this was a cartel narcotics stash and distribution ring, the joint law enforcement operation monitored those entering and exiting the residence for several days.

This surveillance was conducted in order to find a pattern in their scheduling, according to<a href="https://www.kveo.com/news/local-news/40-undocumented-immigrants-found-in-stash-houses/1424499797"> local NBC affiliate KVEO</a>.

On the final day of the operation, they awaited the departure of all vehicles from the residential area and moved in.

What they would find inside the home, however, wasn't cocaine, marijuana, heroin, or even methamphetamine.

As law enforcement looked around them, there were over 19 people, all illegal aliens, held in the residence as part of a human trafficking operation.

The aliens were given food, water, and medical attention.

Through a series of interviews with the Immigration and Customs Enforcement (ICE) agency, prior to arranging a flight back to their nation of origin, they were given a tip from one of the aliens.

Yesterday, the same task force used that information to raid another stash house in Donna, Texas, where they would find an additional 21 illegal aliens.

This is a complex and organized operation, and it's usually Cartel and criminal gangs of illegals who are behind this modern-day slavery of their own people.

The <i>DACA recipient was a woman who is originally from Mexico, in that case.

Just two weeks ago, as<a href="https://www.breitbart.com/texas/2018/08/27/daca-recipient-arrested-for-alleged-human-smuggling-in-texas/"> Breitbart Texas reported</a>, ”Agents assigned to the Laredo Sector arrested a former recipient of the Deferred Action for Childhood Arrivals (DACA) program on charges of human smuggling after a call for assistance from Texas Department of Public Safety Troopers.”

CBP and ICE deportation officers carry out targeted enforcement operations daily nationwide as part of the agency’s ongoing efforts to protect the nation, uphold public safety, and protect the integrity of our immigration laws and border controls.

These aliens are evaluated on a case-by-case basis, and, when appropriate, they are arrested by CBP and ICE officers.

<b>This was an enormous victory by CBP, and we're appreciative of their bravery. Thank you!</b>

Thanks for reporting on this! And God Bless our ICE and Border Agents to keep them safe while they keep us safe. Thank You!

??? 36596 Should we use the money for transgender bathrooms?

You racist fuknNeanderthals, we stole all the land we live on from PoCs.

Back to /pol/ faggot