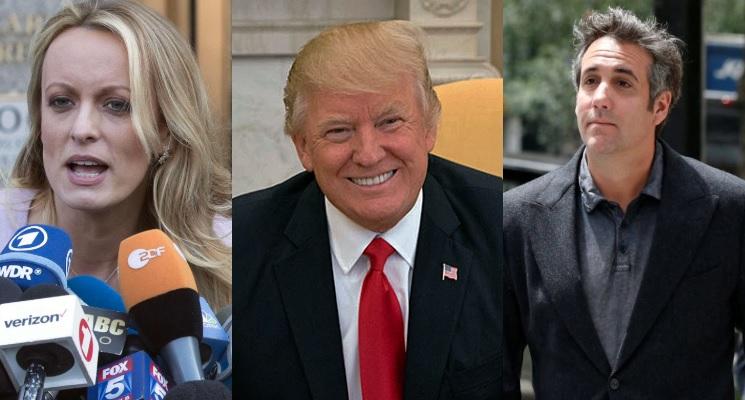 By filing the notice, Cohen's attorney's are also asking the court to dismiss Daniel's claim which would invalidate the deal anyway. Cohen pleaded guilty last month to eight felonies, one of which was violating campaign finance laws for the very agreement he made with Daniels. Cohen negotiated the nondisclosure agreement for $130,000 just 24 hours before 2016's Election Day.

President Trump denies the affair between him and Stormy Daniels, whose real name is Stephanie Clifford, ever took place although he acknowledged reimbursing Cohen for the costs of the deal he arranged on his behalf. Daniels' attorney, Michael Avenatti, recently said the filing won't work. "It won't work for a host a reasons, starting with Trump has not agreed to anything," Avenatti said, who is under investigation himself by the California State Bar.

<blockquote class="twitter-tweet" data-lang="en"><p lang="en" dir="ltr">Michael Cohen is back to playing games and trying to protect Donald Trump. He is now pulling a legal stunt to try and “fix it” so that we can’t depose Trump and present evidence to the American people about what happened. He is not a hero nor a patriot. He deserves what he gets.</p>&mdash; Michael Avenatti (@MichaelAvenatti) <a href="https://twitter.com/MichaelAvenatti/status/1038244988331540480?ref_src=twsrc%5Etfw">September 8, 2018</a></blockquote>

<blockquote class="twitter-tweet" data-lang="en"><p lang="en" dir="ltr">Let me be clear - my client and I will never settle the cases absent full disclosure and accountability. We are committed to the truth. And we are committed to delivering it to the American people. <a href="https://twitter.com/hashtag/Basta?src=hash&amp;ref_src=twsrc%5Etfw">#Basta</a></p>&mdash; Michael Avenatti (@MichaelAvenatti) <a href="https://twitter.com/MichaelAvenatti/status/1038267522573729792?ref_src=twsrc%5Etfw">September 8, 2018</a></blockquote>

The filing by Cohen's lawyer Brent Blakely said, "Essential Consultants LLC covenants not to assert any right and/or claims against Stephanie Clifford aka Stormy Daniels with respect to the validity and/or enforcement of the Confidential Settlement Agreement, including but not limited to any claims against Stephanie Clifford aka Stormy Daniels for breach thereof." He also says in the filing that Essential Consultants reserved the right to seek reimbursement of that $130,000 paid to Daniels to keep her quite.

Blakely said in a statement, "Today Essential Consultants LLC and Michael Cohen have effectively put an end to the lawsuits filed against them by Stephanie Clifford aka Stormy Daniels. The rescission of the Confidential Settlement Agreement will result in Ms. Clifford returning to Essential Consultants the $130,000 she received in consideration, as required by California law."

In additional papers filed Saturday, the President himself said he will not attempt to enforce the nondisclosure agreement which prevents Daniels from discussing the alleged affair. Saturday's papers were filed in Central California federal court and say that Trump has "never taken the position that he was a party" to the agreement with Daniels. Trump never signed any agreement either.

The President's current attorney, Charles Harder, asked the judge to take Trump out of Daniels' lawsuit completely on the grounds that her claim against him was based on the NDA which is now invalid. Harder told Daniels' attorney "Ms. Clifford should immediately dismiss Mr. Trump from this lawsuit." If she does not, Harder wrote that they should "meet and confer … regarding Mr. Trump’s contemplated motion to dismiss."

This slut has no rights at all to do what she is doing. Her lawyer the sleazeball is most likely screwing this low life slut. Someone who spreads their legs for anyone or anything shouldn't be allowed to do what she is doing to anyone let alone President Trump. I don't give a rats ass about this whole and her jackass lawyer. I hope this fool losses his license to practice cause what a total joke he is. Stop giving this whore 5 minute fame crap. Let it go enough.

James, you remind me of one of the extras in the DEM BEATS RuPaul video