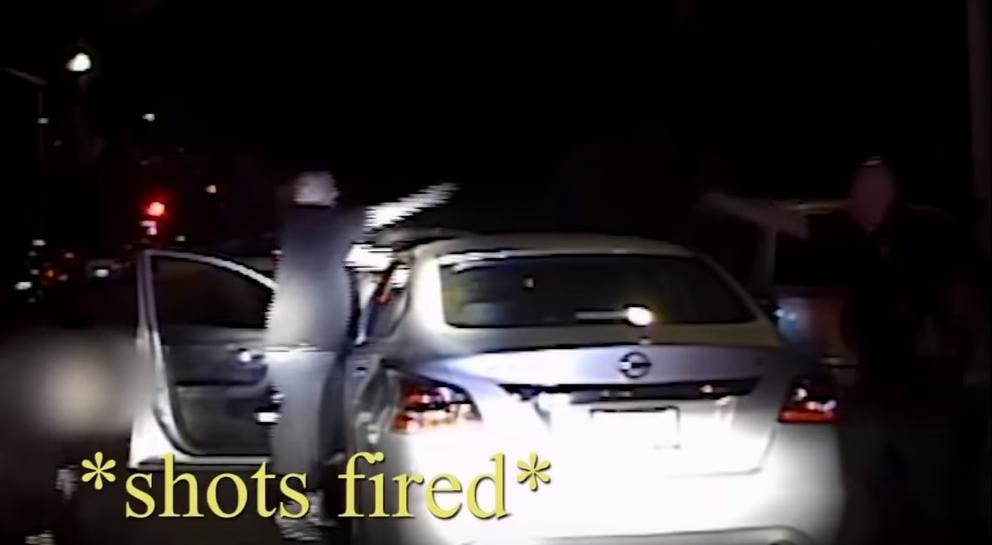 Two uniformed Los Angeles police officers conducted a traffic stop on a known gang member and the routine scenario quickly turned deadly. The two officers were assigned to Mission Patrol Division and conducted an investigative vehicle stop in the 9000 block of Noble Avenue on July 27, 2018. As the officers approach the suspect's vehicle, one on either side, the sole occupant seems cooperative and keeps both hands raised in the air.

The driver was later identified as Richard Mendoza and the female officer who contacted him on the driver's side recognized him. The male officer tells Mendoza to shut off the car as they walk up to either side of the vehicle. The female officer then asks the driver, "How you doing?" to which Mendoza responds "good". She then says "Haven't seen you in a while. Still on probation?" Mendoza replies, "Nine more months ma'am. Nine more months and I discharge." After the brief exchange, she tells Mendoza, "Ok, I am gonna have you step out of the vehicle."

The whole time, Mendoza keeps his hands out in front of him as if he is complying and unbuckles his seatbelt with his left hand. This is important because he consciously keeps his right hand free because that is the hand closest to the firearm between the seats. As he shifts his weight to get out of the car and with his left hand still out in front of him, Mendoza steps out of the car while slyly reaching for his .380-caliber handgun with his right hand. His body's motion conceals the actions of his right hand and by the time he is out of the vehicle he has suddenly shoved the firearm into the female officer's body and fires one round at point blank range.

She instantly falls to the ground and is out of the fight and screaming in pain. Thanks to the quick reactions of her partner on the other side of the vehicle, he is able to get several rounds off at the suspect and appears to strike him in the head with one of the rounds causing Mendoza to drop to the street. The male officer quickly rotates around the car and fires one more round for good measure into the would-be cop-killer. He then gets out some excellent radio communication to dispatch saying, "Officers need help. Shots fired!" He even gets out the location saying, "Noble south of Plummer!"

The male officer then checks on his partner who is still writhing in agony on the ground. He asks her where she is hit and she responds, "In my left leg." He tells her she will be OK and as he examines her wound he says, "Oh my God." The female officer then tells her partner, "Just get him", referring to Mendoza. He quickly handcuffs Mendoza and blood can be seen streaming from the bullet wounds. Paramedics arrived at the scene and treated the female officer before taking her to the hospital.

The video was released Monday by the Los Angeles Police and features angles from the police cruiser's dash cam, and both of the officer's body cameras. The shooting is clearly justified and if the male officer had not reacted so quickly they would have both likely been killed by the gunman. Police identified the gunman as Richard Mendoza, 32, a gang member on probation. He was struck multiple times in the torso and head and died of his injuries at the hospital. The officer got some great shots off very quickly and he and his partner lived to see another day.

LAPD Capt. Patricia Sandoval later identified the male officer as Miguel Alarcon of the Mission Division. Capt. Sandoval would not identify the female officer citing "confidentiality protection as a victim of a violent crime." LAPD Chief Michel Moore said his officers narrowly escaped greater harm. "By the grace of God she is alive," Chief Moore said. "Officers are fearful in these situations and the public here gets to see why. Once a person has you in that position it is very tough. You cannot stop that first one or two shots." He is absolutely right, police are always reacting while suspects are the ones dictating the actions.

Chief Moore added that the female officer worked on the gang unit and recognized Mendoza and was knew of his criminal history and gang affiliation. Mendoza went by the street name "Biz" and was known as a member of the Vincent Town street gang by the LAPD. Mendoza has a lengthy criminal history ranging from possession of a firearm by a felon and narcotics distribution. Chief Moore credited the male officer with saving both their lives with quick and decisive action. He also said this incident illustrates why officers approach on both sides of a vehicle.

If you want to hear some commentary from a retired LAPD police officer and former FBI instructor you can delve into the video above with commentary from Rick Gore. Rick points out that when two officers approach either side of a traffic stop, one officer should be the point of contact and handle the talking while the second is supposed to be providing cover. Chief Moore said the female officer ended up suffering a shattered femur from where she was struck in her upper leg saying, "I spoke with her, she is OK."

The video was released relatively quickly under a new policy that requires that police recordings be made public within 45 days of an officer-involved shooting. An LAPD commander named Alan Hamilton of the department's Force Investigation Division will be investigating the incident in North Hills. Hamilton will be examining the shooting in great detail including which tactics were used.