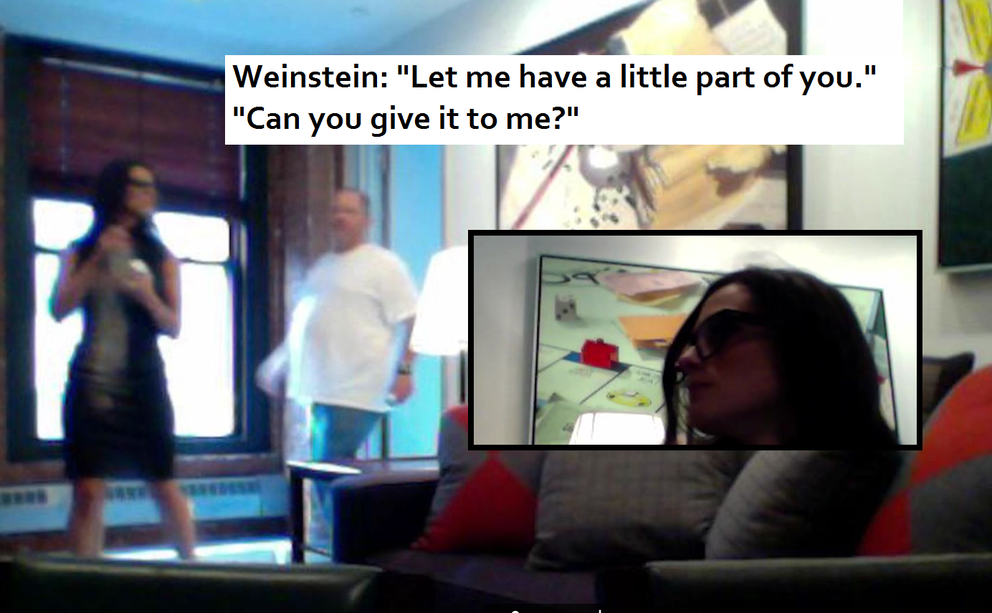 Ms. Thompson understood as from the moment that the meeting started that Mr. Weinstein was sending his own personnel out and asking ‘not to be disturbed.’ She, therefore, turned on her laptop camera.

As from the start, Mr. Weinstein pulls away from her hand and hugs her saying “that’s nice, let’ keep it up.”

He can be seen touching her shoulder as they sit side by side in front of her laptop computer. He then tells her: “Let me have a little part of you. Can you give it to me?”

Mr. Weinstein’s lawyer Ben Brafman claims that the full video “demonstrates that there is nothing forceful” and shows “casual, if not awkward, flirting from both parties”.

“Anything short of that is intended to make Mr. Weinstein appear inappropriate and even exploitative.”

“It was produced by Ms. Thompson to bolster her position in a civil lawsuit seeking money. This is a further attempt to publicly disgrace Mr. Weinstein for financial gain and we will not stand for it. Facts do matter.”

According to Ms. Thompson, the video also shows the two making arrangements to meet up later to close the deal. Mr. Weinstein allegedly then led her to a hotel room and raped her.

Ms. Thompson explains: “If I would try to fight myself away from him, he would then move around to where he could block me in somewhere, and he’s a big individual.”

“I constantly felt trapped, no matter where I turned.”

“I never met anyone that I couldn’t handle until Harvey Weinstein. We don’t have to live with being raped when we think we’re going to a business meeting.”

What do you think about Harvey Weinstein’s behavior during this encounter? Flirting or groping? Let us know in the comments section below. 100% freedom of speech, 100% anonymous.

SEE… THATS WHAT HAVING TO MUCH MONEY DOES TO YA… MAKES YOU BELIEVE YOUR A CASSANOVA AND EVERYONE'S A WHORE!!