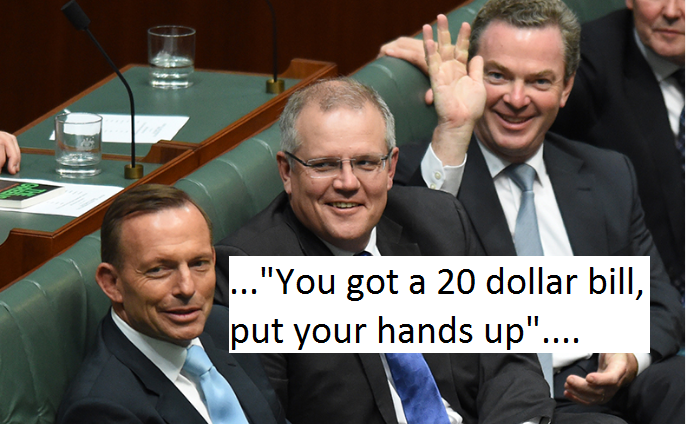 Australia – New PM Morrison “You Got A 20 Dollar Bill, Put Your Hands Up” (Video)

||| Australian Parliament Webcam and The Goldwater |||

When I presented Australia’s new Prime Minister Mr. Scott Morrison to the readers of thegoldwater.com 3 weeks ago (see related coverage), I said he was a right-wing evangelical making a political coup, to which some claimed that it was a rather soft right-wing turn for the country.

I also asked whether he would repeat his 2006 stunt anytime soon. Back then, after taking charge of Tourism Australia, he launched an advertising campaign to lure more international visitors, featuring the model Lara Bingle in a striped bikini asking: “So where the bloody hell are you?”

Related coverage: <a href="https://thegoldwater.com/news/35060-Australia-Will-The-Right-Wing-Coup-Pay-Off-Video#35063"> Australia – Will The Right-Wing Coup Pay Off? (Video)</a>.

It would seem Mr. Morrison took on the challenge because the first embarrassing moment comes three weeks later only.

In order to present his cabinet to a ‘younger crowd’, he posted a 10-second clip on social media, showing his parliament waving their hands to the tunes of rapper Fatman Scoop’s one-time hit “Be Faithful”.

Mr Morrison realized only hours later that the song’s lyrics are ‘just a tad’ inappropriate to his evangelical base and removed the video, stating: “The full lyrics of the song used in my earlier video from QT today were just not OK. When I found out, I asked the team to take it down. Apologies.”

The video had been viewed more than 170,000 times before the PM deleted it.

Parts of the song (not the brief snippet that featured in the PM’s post), indeed include expletives and sexual references. Although many saw the humorous side to it, with some saying the “gold” clip was refreshing to see from a national leader, others branded it an “embarrassing” PR stunt and accused Mr. Morrison of behaving like a teenager when he has more serious things to focus on.

I guess that’s my question answered then whether Mr. Morrison would pull a PR stunt anytime soon.

What do you think about Mr. Morrison’s clip? Good fun or should he indeed be 100% serious all the time? Let us know in the comments section below.