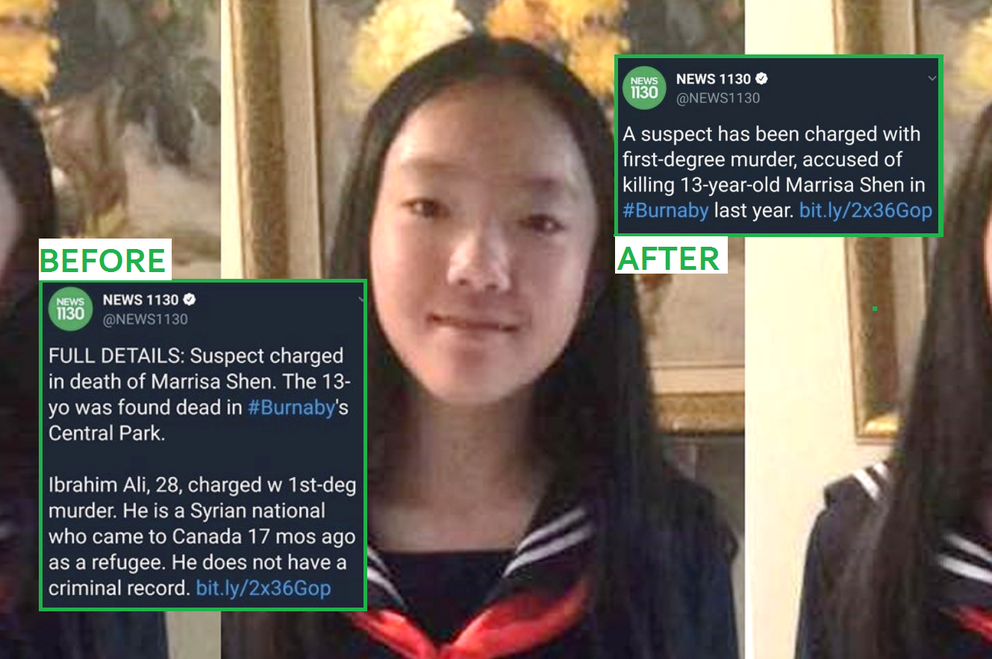 ‘Someone is going to get fired for this’ must have been the thought of the editor over at Vancouver’s News 1130 when they saw that the manhandling the twitter feed earlier this week had revealed details about the Afghan refugee suspect now in custody for the murder of B.C. teen Marrisa Shen.

Their first tweet, now deleted, read: “Suspect charged in death of Marrisa Shan. The 13-year-old was found dead in Burnaby’s Central Park. Ibrahim Ali, 28, charged with first-degree murder. He is a Syrian national who came to Canada 17 months ago as a refugee. He does not have a criminal record.

The Vancouver news service later deleted the original tweet and replaced it with: “A suspect has been charged with killing 13-year-old Marrisa Shen in Burnaby last year.

The Syrian refugee Mr. Ibrahim Ali now indeed stands accused of murdering the 13-year-old girl, but given the different versions of the 1130 tweets, it was apparently not sure whether authorities in Canada wanted to release that particular information.

RCMP Super-intendant Ms. Donna Richardson told reporters: “I think by and large the refugees that come to this country are hard-working citizens that are very happy to be in Canada.”

“I would just hope that we look at this incident for what it is. It is a one-off situation.”

The refugee came to Canada with a sponsor program of the. Andrews-Wesley United Church in Vancouver. Their spokesperson claimed: “Our hearts go out to the Shen family who have no doubt been devastated by Marrisa’s death.”

“Our prayers also to the Ali family. We know that like many refugee families, they have endured their own suffering and loss and that this tragedy is made all the more complex by the trials they have faced.”

Canadian Prime Minister Justin Trudeau has not yet reacted to the news.

Diversity is so nice on paper.

But not so nice on a death certificate.

In a nutshell, that superintendent basically said that the murderers life experience made little girls murder acceptable. Someone please lock these disgusting appeasers up and throw away the key

Why are all these different gov agencies from around the world protecting criminal ILLEGAL IMMIGRANTS. In AMERICA they are actually letting killers & rapists go free, just bc they are an ILLEGAL IMMIGRANT. They get better Treatment then American citizens. When we break a law we HAVE TO GO TO PRISON. BUT if you are an ILLEGAL IMMIGRANT, or a democRAT you walk away FREE FROM PERSECUTION. What happened to taking care of the people of your Country. They can get welfare way easier then any American. I love legal immigrants. I have to follow the laws, & they should have to follow OUR LAWS. The Illegal immigrants are using our own SYSTEM against us, & our Congress is doing nothing about it. We need TERM LIMITS FOR ALL GOVERNMENT PERSONAL! NOW!