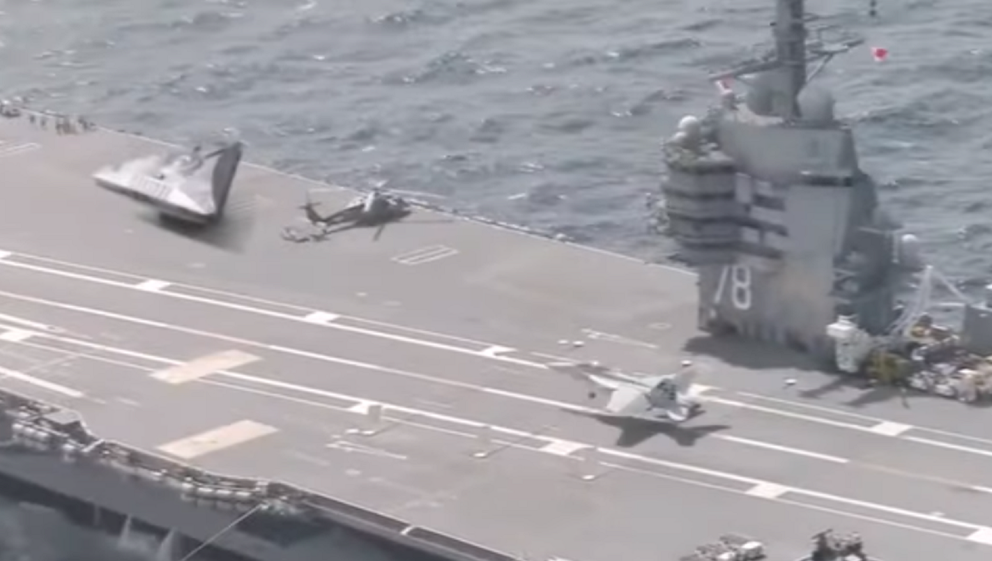 All Aliens Aboard? – Internet Ponders Authenticity ‘UFO’ Plane On US Aircraft Carrier (Video)

Conspiracy theorists are going mental over footage released by 'Section 51', a US-based YouTube channel which usually has videos of unidentified flying objects filmed in grainy pixels and dark colors.

This time around however, the site uploaded a video showing a fighter shadowing a US jet as it comes in for a landing aboard a US aircraft carrier. On the runway, one can clearly identify a grey metallic triangle-shaped object parked next to a Navy helicopter.

The footage has gotten three-quarters of a million views in days only and commenters are eerily debating whether the video has been tampered with, as many claim that with today’s CGI, you can never be sure.

One user was quite specific and claimed it was part of a known US air force development program: "TR-3B. It really exists! I think it's a TR-3B, the latest of the US's black projects vehicles."

His theory was later supported by another user offering a more detailed explanation: "this is the next generation of secret technology developed by the skunk works and other secret development programs. It is in any case not alien. It might have been developed with the use of reverse-engineered alien technology. But built on this planet."

If commenters are to be believed, what you’re looking at is the landing of a US Navy F-15 fighter jet aboard the USS Gerald Ford while on its decked a TR-3B, an alleged ultra-secret anti-gravity spy plane vehicle some believe is being developed by the US Air Force, is parked in plain sight.

Others were less convinced of the authenticity though, stating: "Pretty sure they wouldn't leave it parked on the deck of an aircraft carrier were it an alien spacecraft or some sort of secret technology."

"So tell me why a craft which can defy gravity and travel faster than anything known by mankind, which doesn't use fossil fuel stands on the deck of an aircraft carrier?"

Secret project or hoax? Let us know what you think in the comments section.

If it’s real it could have had needed repairs or a crew swap? It seems there is some sort of triangle craft being sighted somewhat regularly so if it’s ours one can only figure at some point one would be sighted without being hidden in the dark. As a kid I remember the plastic stealth airplane models that were considered science fiction till they kicked Sadam’s arse in real life.

So…guys this is a BAD altered video and is completely fake. Notice the density and angles of the shadows on the fake object and the helicopter next to it. Notice too how the quality of the video changes as the jet lands. Notice how that affects the object image quality and details on the object’s surface.

Also to the author “Steve”: Nigga please…the Navy has NO F-15’s.

So obviously fake, as the sasquatch pointed out, the shadows are all wrong lol

a video like this could be made with an iphone

As far as I know the navy is still flying and upgrading the F-15E and has over 200 still active. The F-14 is no longer flown by the US but is still used in other countries. The video shows what looks like an F-15E but I do agree that the shadows look off on the triangle craft.

Shadow underneath that thing same as the shadow under plane. Doubtful.

This could be faked, but if it's real, it's a military craft designated to the carrier just like the atmosphere-limited aircraft.

US Military has been in possession of, and able to manufacture weaponized craft such as these that appear as black triangles, since around the 60s. The two models I am aware of are known as TR3A and TR3B.

This is nothing new. Look up Project Solar Warden for more info. Many countries (US, UK, China, Russia at least) are in possession of fleets of craft like this for their military space operations. All the countries listed above most likely already have operational manned moon bases as well. Research secret space program for more info. Private sector (and classified gov) tech is at least 100 years ahead of publicly known tech.

fake as hell. shadows all wrong

To the poster above that claims the Navy is flying F-15E’s: no they’re not. They never did. There was long ago an attempt to replace the aging $38 million dollar (in 1998 dollars) F-14’s. The pitch back then was for a F-15N. However it offered no advantages and to carry the same Phoenix missiles to protect the fleet would’ve weighed an extra 10,000 pounds. Hence it would’ve had lower performance and dogfighting ability than the old F-14’s. Plus the carriers would’ve required refit to support the hogs…this is why we have the F-18’s…duh…

Of course if I’m wrong please provide the links, and I’ll apologize. ;-)

It is very easy to say that the footage is fake: compare shadow intensities and the "feather" effects below anything else on the footage and the "ufo". Simply, there is no way that shadow below the "ufo" can be darker than anywhere else. Come on guys…

cute ' but is faked the shadow doesn't do well / compared to the helicopter shadow ..

if interested consider this in yt at chan name helipiasmo (with link to daily motion) UFO closer than ever in yt 2009 yr not cgi , Very strange ufo over the city of Toulon in France //another man gets attacked by UFO (title bit over done) 9thprotocol yt ch name //just giving title in yt and that chan is not the original owner ..for a fact so it seem bit blurry and the had in posted in uk netnewsite. June 2011-London UFO's- 3 SEPARATE Witnesses Record Same Event! enlarge screen helps. do you guy know that when yt start oneof the original guy involved with yt ,he to post his own sighting video , it amazing how many people pay attention to the skies , and flying .when obama came into yt ,there was other netsite set up //many left ooh gov, well the cia already has site yt for years pre obama. so far ok~ but this other site some amazing sighting = those lady selling stuff via phones those did exit the yt . ~ wow obama could got a lot done but seems Trump , trumped the o.. maga , there are several kinds of real aliens and noted the sept 15 sun catch , will leave that to all of you. learning some of this takes time , and there a lots of questions paperclip pre that , some really sick stuff , not just related to the age of people in 40s to 80s ,nor their mindset back then. //the sunspot solar obs, state of new mexico still listed as serious public security incident .. so doubtful ufo/s passing the sun recent vid in yt . if another country could do something that might cause a incident… take care , redfish florida had video of the ufo(sort pod or popcan shape sort of with ridges ) there has been 3 of them seen and the color of exterior varies due to angle and intensity of light. but inside cause a window on that shape you can see through !no sun glare' two large headed grays typical long arms fingers have a sitting are for window is chest to above head viewing . they were over horses here` 2010 in day light 4:45 pm- and there is a black triangle

which doesn't cloak as good as the gray can change pod shape ; and move invisible. so the triangle cute one is a fake for sure. you should all be impressed with your triangle.. just hope it not nas ee , paperclip stuff.. genetics . more more . hey at least not sell a book , the authors save alot for next book ,that is a fact. how will you react with your first encounter… it is not a game .. perhaps the ques and word choice has a distant possibility. space program yep it is a bit older … send questions into the whitehouse =you finally got one in there that CAN , none of you need to wait for any president anywhere to tell you what you see and know… and disclosure did happen years back but like author they too held back lots..

Immediately noticed Shadows between it and other objects are in conflict.

This crap makes you look dumb.