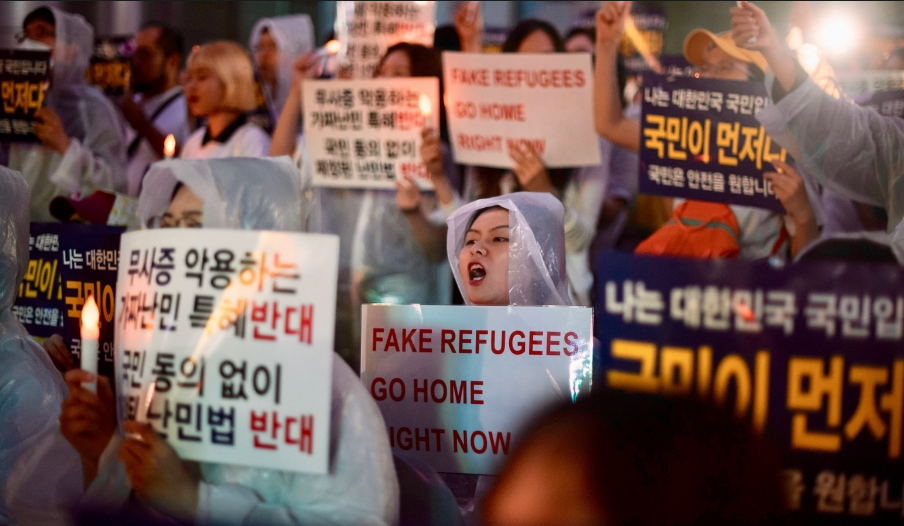 The ever-spreading movement of nationalism versus liberalism is being taken to lands where no one expected it. In South Korea, the arrival of some 550-plus asylum seekers from war-torn Yemen to the island of Jeju has been met with online outcry and ever-growing protests which have by now reached the capital Seoul.

A 38-year-old unnamed protester in Seoul said: "I don't want the government to accept refugees at all, especially those from Muslim countries.”

“Their culture and religion are very different from us. I don't want to see this bad religion in our country where our children will grow up and it will bring harm to them."

Mr. Il Lee, a human rights lawyer, claims that fake stories and online anti-Islam propaganda is the main cause for the growing protests but does also admit that, just as in Japan, the anti-refugee sentiment is not new in Korea.

Furthermore, the government's apparent lack of involvement to improve matters for the refugees arriving hasn’t helped either.

Mr. Lee: "There is a strong phenomenon in Korea that people blame foreigners for everything that goes wrong. But when it comes to the Yemeni asylum seekers, there is a strong anti-Islam sentiment as well.”

Whereas at first the protests were contained to the small island nation, by now they can be seen in the South Korean capital Seoul as well.

People carrying placards written both in Korean and English which state: ‘We don’t want fake refugees.’

A female farmer from Jeju called Ms. Oh Mi-jin said she was furious that the government had left rural people like her “working alone in the fields” exposed to the danger she said migrant men posed. “If Jeju is breached, South Korea will be breached.”

The protests have become so popular that an online petition calling for President Moon Jae-in to stop accepting asylum seeker requests from Muslim countries has by now received over 700,000 signatures.

They don’t want to be invaded. Who woulda thought?

An homogenize community wishes to maintain their demographic status. And this is surprising?