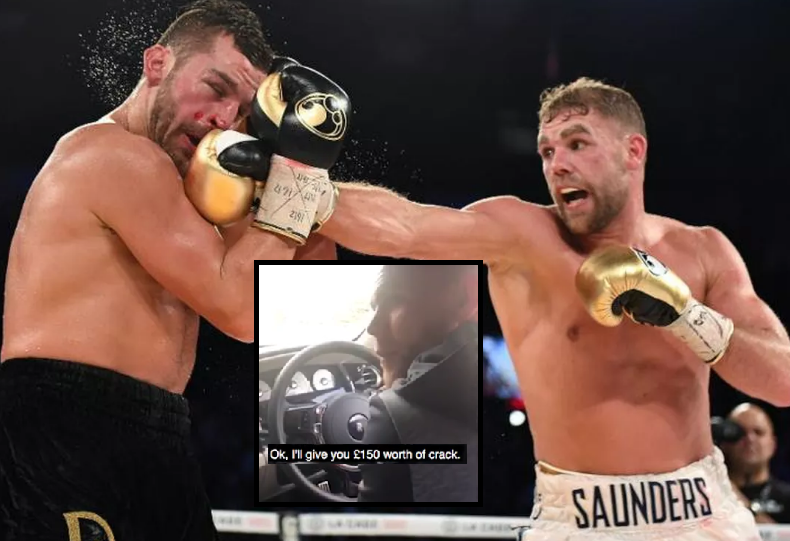 The British police have confirmed they “will investigate this sickening footage” after a video circulated online since yesterday showing British boxer Billy Joe Saunders taunting an apparent drug addict from inside his car and making her do several actions in exchange for ($200) “£150 of crack”.

In the exchange, filmed from inside the boxing champion’s £250,000 Rolls Royce, Mr. Saunders (who next month defends his WBO middleweight crown against American Demetrius Andrade in Boston) promises the woman to crack in exchange for slapping an innocent bystander or performing a sex act on his companion in the car with him.

Woman: 'Nobody, I'm not going to tell anybody.'

Saunders: Swear on your granddad's grave?

Woman: 'I swear on my granddad's grave'

Saunders: 'How much do you need this crack? Tell me the truth.

Saunders: 'How much do you need it?'

Woman: 'Quite a lot. I thought you were on top to start with that's why I said that thing about booze.'

He then makes the woman, believed to be a 37-year-old junkie from Nottinghamshire, slap an innocent passer-by after he said the man was a 'paedophile.'

Mr. Robert Smith of the British Boxing Board of Control has by now been made aware of the footage which he labeled as 'disgusting'

Although Mr. Smith did not say which action Mr. Saunders could face, he did confirm “I am speaking to members of the board now… I am keen to get on with this as soon as possible.”

Nottinghamshire Police reacted with a statement: “Officers will be looking to identify and speak to all of those who feature in this sickening video, and a full investigation will be carried out into the number of offenses that have been captured on film, including the offer to supply Class A drugs, aiding and abetting an assault, assault, and public order offenses.”

“Incidents of this nature will not be tolerated in Nottinghamshire, and we would urge anyone who witnessed this incident, or who has any further information about those responsible to come forward.'”

This guy is a jerk. Hit him where it hurt. In the pocket book.

where's mike tyson when you need him? this guy is a complete asshole. the good thing is that generally P'sos like this don't live long.