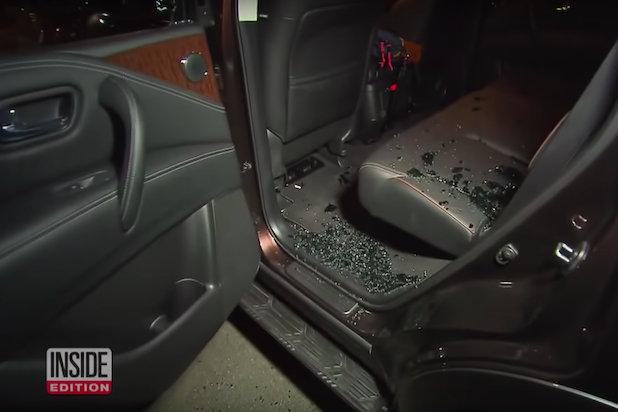 It seems ironic, but an Inside Edition crew covering robbery crime in the San Francisco Bay Area became the victims of robbery themselves.

The crew was poised to document the “smash and grab” crime phenomenon in the area when the windows of their crew truck were smashed, and thieves grabbed valuable video equipment.

Lisa Guerrero and her news team were using the crew truck for the story they were pursuing. The broadcast journalist shared: “Thieves came out here and they broke into our crew truck. They stole thousands of dollars worth of our equipment.”

Guerrero showed to the cameras the shattered glass around their Inside Edition vehicle.

Ironically, the news organization had been in the San Francisco Bay Area specifically to document the very crime of robbery. They even set a trap to catch some potential thieves in San Francisco’s popular Alamo Square by using a decoy car and loading it with goodies including a designer bag and a speaker. The crew had the “bait” items hooked up with GPS tracking devices.

Their predictions proved true when the vehicle was broken into, and Guerrero and her team tracked down one of the thieves in a BART subway station. Guerrero confronted the man on camera. Eventually he returned the speaker and called his mother. A triumphant Guerrero was seen exiting the station, their little experiment having worked, with a “happy” ending to it.

Guerrero’s celebration proved premature, however. When the Inside Edition team later reviewed their footage, they spotted a second break-in happening, and to their shock, they realized it was their crew truck.

Guerrero reacted: “Hey, wait a second, that car looks familiar. It’s our crew car. Unbelievably, when we were inside conducting interview (with the man who lives nearby), thieves came out here and they broke into our crew truck.”

It is not yet certain if efforts are being made to recover the stolen broadcast equipment, and if the suspects have been identified. At any rate, it proved to be such an expensive way to “conduct an experiment.”

The robbery incident comes as no surprise, however, as San Francisco registered 31,000 such crimes last year with only two percent of those cases being solved.

they're idiots! serves them right! or is that a gimmick?