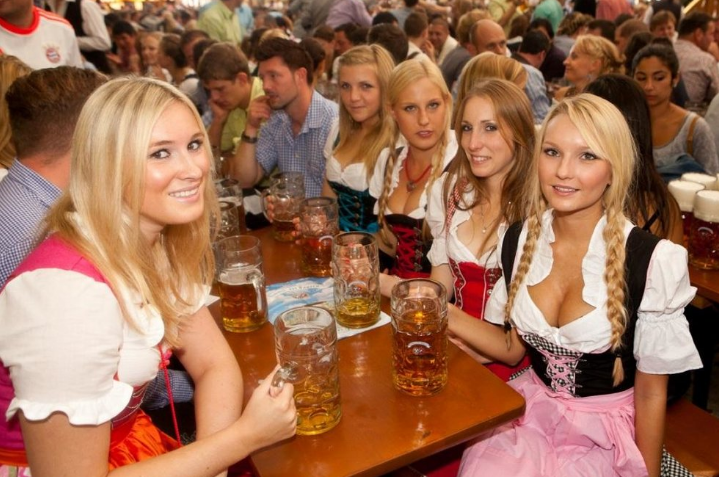 The 185th Oktoberfest, known locally as the ‘Wiesn’ was kicked off in the Bavarian capital, Munich, when Mayor Dieter Reiter started the first keg of beer with just two blows of the hammer at the opening ceremony.

The first glass of beer, traditionally reserved for the state's premier, went to the head of the CSU party Mr Markus Söder, who toasted with the Munich Mayor.

Prices had to be raised as the German government insisted on raising the security levels at the famous festival. Now, some 600 police officers and several hundred security personnel are on hand daily as there were warnings beforehand the venue might be a target for possible terrorist attacks.

The Theresienwiese, the venue of beer halls where the Oktoberfest takes place, is now completely surrounded by fences and visitors are no longer allowed to carry rucksacks with them.

The yearly festival that feasts the end of the harvest has been held since 1810 and will end on October 7.

German visitors tend to dress up in the traditional lederhosen for the men and the skirts for the girls known as the Dirndl. If you’re a foreign visitor, be sure to shy away for wearing the skirt too short as many celebrities have done in recent years. The local Germans do not appreciate the festival being oversexed just for the sake of Instagram pictures.

Secondly, if you get drunk on beer, kindly note that Germans like to dance to the traditional schlagers and ‘hoompapa’ tunes you will hear everywhere but that it comes with a rule of ‘not on the tables’. Those who do are immediately escorted outside.

The first few days of the festival always welcome the players of local football club Bayern Munich, who have not lost a game in a decade during Oktoberfest. With 70% of attendees being from Bavaria itself, locals hope that the record stays intact.