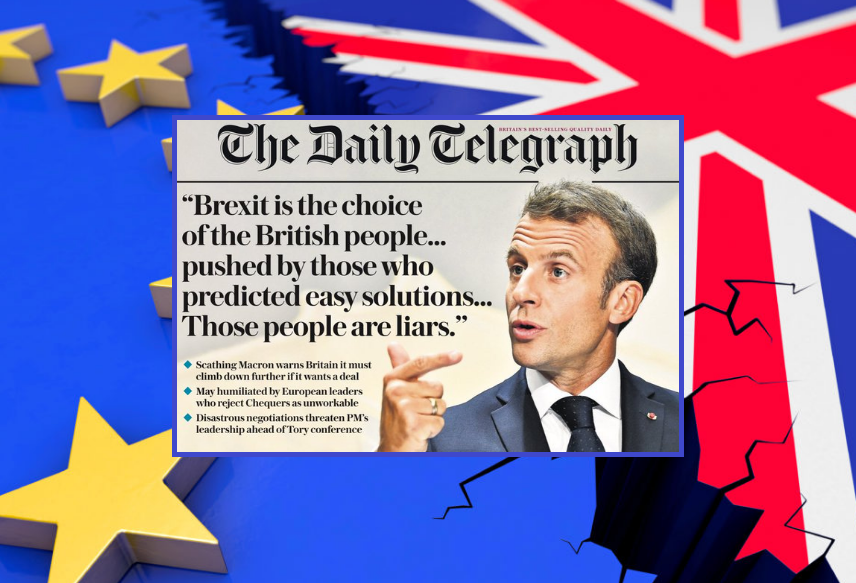 When the Brexit meeting in Salzburg, Austria broke down last week, none of the EU leaders more opposed to Ms. May’s doomed ‘Chequers’ plan seemed to be French President Mr. Emmanuel Macron.

His opposition to UK Prime Minister Theresa May has by now taken on the form of a ‘tantrum’ where he has insisted that the UK either provides a solution for the Irish border (one of the two sticking points remaining) or he will simply not show up for the Brussels meeting where the UK-EU Brexit agreement should be signed in November.

A French diplomat admitted: “President Macron was very clear that unless there was a true Withdrawal Agreement in October, he would not show up in Brussels for the planned November summit. He flatly refused to.”

However, Brexit negotiators admitted that the French President refusing to attend a summit would be seen as a 'nuclear option' which would almost certainly spell the end of negotiations.

German chancellor Ms. Merkel meanwhile, who is clearly at the end of her political career, would not like to be remembered for a failed Brexit negotiation and is urging her French counterpart to give in.

However, Mr. Macron seems convinced the British Prime Minister is making too many demands, stating: “Brexit is the choice of the British people and it is a choice pushed by certain people who predicted easy solutions.”

“Brexit has shown us one thing – and I fully respect British sovereignty in saying this – it has demonstrated that those who said you can easily do without Europe, that it will all go very well, that it is easy and there will be lots of money, are liars.”

“This is all the more true because they left the next day, so they didn't have to manage it.”

In the meantime, Brexiteers are pushing Ms. May to either make a clean break (a so-called ‘No-Deal Brexit’) or to present a solution for the last remaining items to be negotiated quickly.

I wonder how has the UK ever managed to exist for centuries without this crooked, corrupt EU!

Clearly it is a manipulated arrangement between May and Macron to prolong or avoid the actual finish line. If both were so adamant they would sign and be done with it.