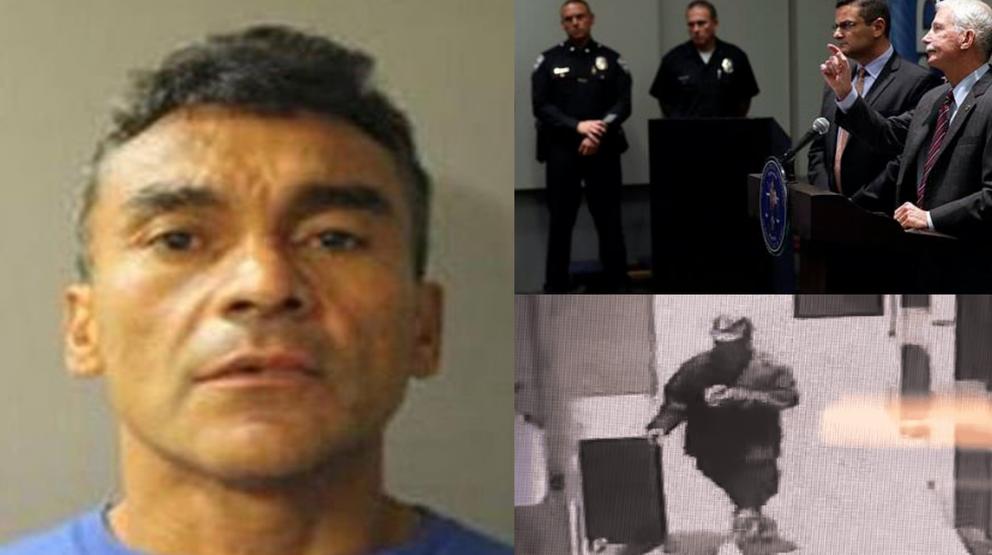 California has suffered amidst the reign of a serial killer that's brutally beaten and killed several men, and now police say he's an illegal alien that has been deported six times.

The horror of the attacks is one that cannot be denied, despite the “Sanctuary” policies of California's liberal elitism that floods the ranks of the Democratic Party controlled state.

The suspect is none other than 47-year-old Ramon Escobar, a known illegal alien from El Salvador, which is considered one of the most dangerous regions in Latin America, responsible for MS-13.

Captain William Hayes with the Los Angeles Police Department’s Robbery-Homicide Division said that Escobar was arrested on Monday morning for the attacks in Santa Monica and Los Angeles.

“He’s a violent predator,” Los Angeles police Captain William Hayes proclaimed during Tuesday's news conference. “Nobody in their right mind would do something as vicious as this.”

Vicious is an understatement after Escobar was linked to seven attacks, that span both cities; leaving three men dead and another four seriously injured as a result.

“He’s preying on innocent people… In most of these cases, the victims were asleep and he went up and did it,” Hayes says.

Over the period of just 17 days, several police departments in California would find homeless men lying dead in the street, more often than not, killed while the slept.

Some of the victims are believed to have been murdered with a baseball bat, one having his face crushed completely with the blunt force of Escobar’s swing, all while the victim was dreaming in his sleeping bag.

Another man was found by Santa Monica police having been killed with a pair of bolt cutters, shredding his face as if he were victim to a slasher horror film.

“It’s not just that people are being murdered. You hear of people being bludgeoned to death on city sidewalks,” said Mel Tillekeratne, executive director of Shower of Hope.

The Shower of Hope is a non-profit that gives free mobile showers and hygiene-related services to the homeless in California's nightmarish cities.

Tillekeratne added, “It breaks your heart.”

Three victims are now dead, including 59-year-old Kelvin Williams, 34-year-old Braden Ridout, and 39-year-old Steven Ray Cruze Jr.; all of whom Captain Hayes says did nothing wrong prior to their deaths.

The LAPD says they'll be bringing murder charges against Ramon Escobar in those three cases, and attempts murder in the beatings of the other four victims.

Those additional beatings occurred during the period of September 8th to 24th, Hayes said.

As three of four of those men are still in critical condition, fighting for their lives? There could be even more charges of murder if one were to not make it.

Fortunately, surveillance video and other forensic evidence linked Escobar to those seven attacks, but the LAPD is unsure if Escobar’s crimes are limited to these known cases.

Escobar has previously been convicted of felonies inside the United States of America and even served prison sentences. Those arrests and convictions are for assault, burglary, and trespassing in just the Houston area alone, court records show.

From 1995 until the year 2000 Escobar served a five-year prison sentence for burglary, police say.

Unsurprisingly enough, Escobar was previously deported several times and was even granted the right to be an asylum seeker and return to the United States of America afterward.

With the warnings of President Trump becoming true, once again, we cannot help but ask ourselves why we allow this filth into our country.

The Immigration and Customs Enforcement (ICE) agency said Escobar was ordered deported in February 1988 and was sent to El Salvador six times between 1997 and 2011.

ICE said that Escobar has six felony convictions, and will now face the additional charges of “illegal reentry,” punishable by 20 years in prison.

“After illegally reentering the U.S. following his most-recent removal, he filed an appeal of his immigration case, in June 2016, which the courts granted in December 2016,” ICE told The Goldwater. “ICE released him from custody on an Order of Supervision in January 2017 pursuant to the court’s decision.”

According to LAPD Detectives, there was a motive behind the murders, and that's partial “thrill-kill,” they argue.

“Thrill-kills” are homicides committed by the suspect to release endorphins into their brain, where the body is rewarded from the premeditated, or random murder. Those responsible are motivated by the sheer excitement of the act.

Captain Hayes and LAPD Detectives say Escobar was also interested in theft, by taking whether valuables he could off the corpses of his victims.

Around 1500 miles from where Escobar’s vehicle was registered in Houston, cops would find his stashed Honda CR-V along i-10 next to the Pacific Ocean.

Inside the car, authorities located the bat used to crush the skulls of some victims, and enough blood to make a morgue feel uncomfortable.

California’s hotbed of wealthy elitists inside the Democratic Party, along with the warmer climate, make it a place where the homeless can flourish.

They'll stand on street corners where they hold cardboard signs saying, “Hungry, please help,” or “Homeless and Broke,” as a means of <i>panhandling</i> to survive.

None of those who were assaulted deserved death, and at best, they were simply a reflection of America's unwillingness to take care of its own poor citizens.

The United States of America has no problem in<a href="https://explorer.usaid.gov/cd"> giving hundreds of billions annually </a>to foreign nations, with<a href="https://ifamericaknew.org/stat/usaid.html"> some of those countries</a> bringing in tens of millions per day.

Two of Escobar’s victims, Williams and Rideout, would be found in downtown Los Angeles’ Financial District on September 16th.

Just four days afterward, Cruze was killed while sleeping under the Santa Monica Pier, where he was resting after a fishing trip, authorities said.

Cruze wasn't homeless but oftentimes slept under the bridge between work, according to his family, because he would come there to fish.

“He was doing what he wanted to do in life, and somebody took his life from him,” said the victim’s uncle, Steven Smith.

“He loved everybody and didn’t have a bad bone in his body. He has so many people that he fished with on the pier. He had no issues with nobody,” Smith said.

Outside of the series of homicides, Escobar is wanted for questioning in the disappearance of his aunt and uncle, Dina and Rogelio Escobar, Houston Police Chief Art Acevedo said.

Both the brother and sister had last been spotted in late August, Houston Police Lt. Humberto Lopez said, but neither has been heard from since.

65-year-old Rogelio Escobar was last seen near a shopping plaza in Houston on August 26th. Police recovered a backpack on the porch of his Prudence Drive home the same day, Lopez said. 60-year-old Dina Escobar went to find him in a 2007 Chevy Uplander and was never seen again.

Foul play is suspected in both disappearances, authorities said, after Dina Escobar’s vehicle was found burnt completely on a beach in Galveston, just 50 miles away.

If you or anyone you know has any information about these crimes, you're urged to contact either the Los Angeles Police Department’s Robbery-Homicide Division or the Houston Police Department immediately.

Six days later, Escobar would make a mistake in his killing spree, after surveillance cameras spotted him in the downtown Financial District with a baseball bat.

He attacked the first three of the men with a bat to the face, as they slept along Flower Street from 4 AM to 5 AM police said. Two days later, both Williams and Ridout died of their injuries.

One man still remains in a coma, authorities said, but they hope when he comes to he can help identity Escobar and possibly testify in a court of law.

Congress is beyond overdue to finance the border wall. Contact your elected official today.

The continued arrests of illegal aliens such as Escobar are going to be powerful for the Trump campaign in 2020.

All efforts of the ICE agents to stop "Sanctuary States” and “Sanctuary Cities” can easily be proven by statistics, as per the enormous crime rate which illegals are responsible for.

Escobar is a dangerous illegal alien, and many more like him exist.

An enormous thank you goes out to all of the officers and law enforcement agencies involved in this arrest.

Patriot vets being killed by an illegal alien is all on the criminal element in our government that call these animals undocumented residents! The Socialist party that was once known as the Democratic Party is responsible!!

This man needs to be the first of many used to build the southern border wall. Lynch him, and leave his carass hanging on the patetic fence they have at the border right now as a warning to the next round of border jumpers.