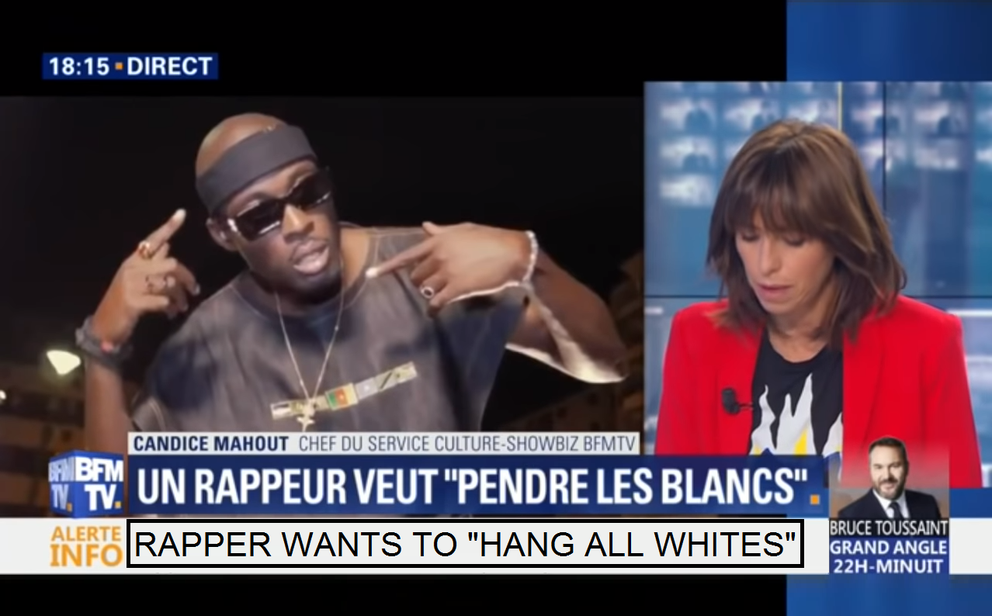 Loyal readers of thegoldwater.com know by now that ‘French Rap’ is big business. Because of the law that stipulates 40% of all songs played on French radio stations has to be in their native tongue, French rappers are millionaires.

As of late though, they are following their US counterparts in ‘shock value.’ The French media reacted with disgust and anger to a new song by rapper Nick Conrad called ‘Hang White People.’

The French rapper has subsequently been suspended from YouTube for violating the company's terms of service but his video was quickly uploaded to Dailymotion afterward. The song is being widely shared across platforms in France now.

Anti-racism groups called it an incitement to violence and racial hatred, and the lyrics have sparked outrage online.

LICRA (International League against Racism and Anti-Semitism) stated: "The incitement to murder in Nick Conrad's video is despicable and unbelievably violent."

Related coverage: <a href="https://thegoldwater.com/news/37928-France-Shock-As-TV-Debate-Claims-There-Is-An-Africanisation-Of-France-Ongoing-Video"> France - Shock As TV Debate Claims “There Is An ‘Africanisation’ Of France Ongoing” (Video)</a>.

Mr. Conrad’s lyrics are: "I go to nurseries and kill white babies. Catch them quickly and hang their parents, tear them up to entertain black kids of all ages big and small. Whip them hard, frankly, it stinks of death as blood is gushing."

French Interior Minister Mr. Gerard Collomb condemned the song immediately, saying there was no place in French society for ‘this kind of creative artistry’.

He stated: "I condemn unreservedly these abject remarks and ignominious attacks."

"My team is working towards the immediate withdrawal of the content. It will be up to the judicial authority to give the appropriate follow-up to these hateful appeals to hatred."

The Paris prosecutor has by now launched an inquiry into the music video, as French broadcaster BFMTV confirmed last night.

Excuse me, but whatttttt? Have the French lost their minds? Sad and pathetic.

On a positive note, even those cheese-eating surrender monkeys in France understand that it’s a racist song. Here in the US or in the UK, the Deranged Left in media would probably defend the rapper, bleating “free speech”, unless of course a white rapper happened to go for the clicks as well by writing some drivel about lynching black kids, in which case they’d fire-bomb his house and send him to a re-education camp for wrongthink. 😒

RACISM AND HATRED ARE DEMONIC SPIRITS THAT WILL TAKE UP RESIDENCE IN ANY AND ALL. REGARDLESS OF SKIN COLOR, THAT CHOOSE TO EMBRACE THEM.