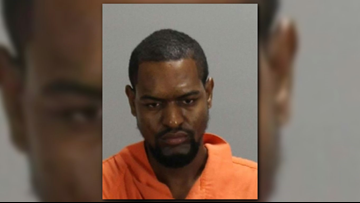 There's disturbing news coming out of the Forest Park, Georgia area where a man was taken into custody for stabbing his wife dozens of times, killing her in front of her children.

Eyewitnesses to the pair fighting called 911 to report a domestic violence dispute occurring inside the pair's Springview Drive home, according to a police report from the Clayton County Sheriff's Office.

Upon arrival, authorities found Christian-Jones deceased, with her head nearly severed from her body.

One of the neighbors of the couple witnessed the entire event.

She claims that shortly after Jones murdered his wife, he began screaming at the children.

“What are you crying for?” Jones screamed. “You act like you ain't never seen a dead body before.”

The neighbor says Jones was talking to his young daughter, who was inside the home when authorities arrived.

Jones, however, was nowhere to be found.

Several others who live in the vicinity of the home could hear the commotion from their fight, and the blood-curdling cries of a woman being nearly decapitated.

Jones himself contacted emergency 911 to report that he committed the crime as if he had been driven off the deep end.

Some neighbors say that they weren't aware of previous domestic issues and that this was unexpected.

"They might have had problems at home that we didn't know outside," a neighbor said.

Jones’ clothes were soaked in blood when police found him later at the nearby Holiday Inn, and he was taken into custody for first-degree murder.

A senseless slaying at the hands of a ruthless criminal, with no regard for human life or the wellbeing of his children.

—“You act like you ain't never seen a dead body before.”—

HIDEOUS INHUMAN RABID DOGS. I BLAME DEMOCRATIC PARTY!! THIS IS THE KIND OF SOCIETY THEY INSPIRE AND SUPPORT!!

In response to 'black people must be sterilized' No one was more violent than white people during slaverly, those actions were beyond inhumane - And you expect your opinion to be taken seriously -

Now how does it feel to be judged and labelled ?

that was long ago. i never had a slave…. less than 5% of southerners owned slaves.

More up to date FBI statistics tell a similar story. In 2013, black criminals carried out 38% of murders, compared to 31.1% for whites, again despite the fact that there are five times more white people in the U.S.

Despite being outnumbered by whites five to one, blacks commit eight times more crimes against whites than vice-versa, according to FBI statistics from 2007. A black male is 40 times as likely to assault a white person as the reverse. These figures also show that interracial rape is almost exclusively black on white."

Now YT gets to pay for the remaining ni9lets care as well as the care and feeding of the now corralled buck. NU ain't cheap!

Spay and neuter these savages. Put some chemical castration/sterilization in some vaccines just for them and administer it to every negro on planet Earth and in 2 generations Earth would become 50 percent safer and cleaner.