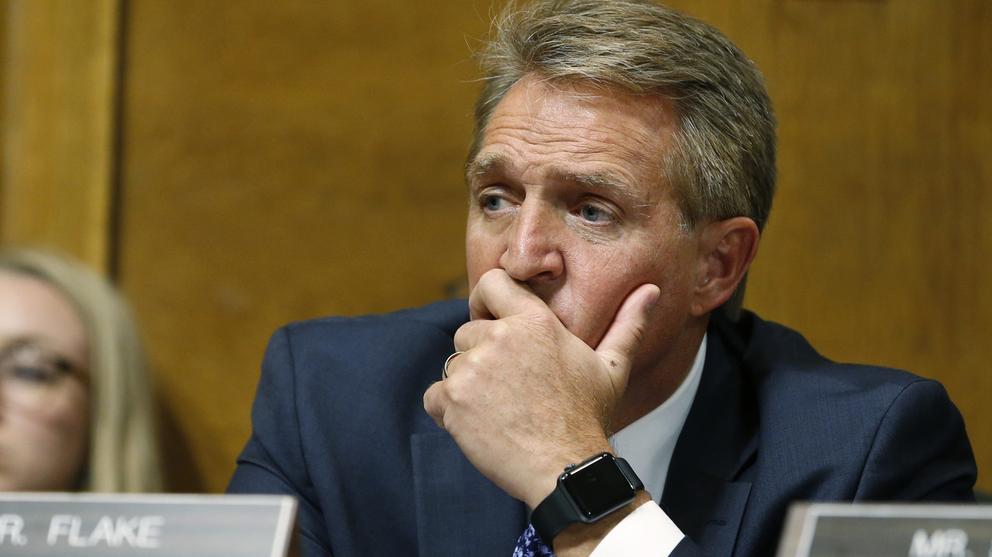 Jeff Flake Comes Out Against Kavanaugh, Calls For FBI Probe

All stops are coming out to prevent Brett Kavanaugh from being confirmed into the Supreme Court. After a 2016 presidential win by Republicans, the far-left deep state Democrats are moving the goal post as to what is ethical in politics. They have shown that trial by public opinion is enough to condemn someone just by making the accusations public. Now, Senators Jeff Flake (R-Ariz.) and Lisa Murkowski (R-Alaska) have flipped and joined Democrats in calling for a one-week delay in final voting on President Trump's Supreme Court nominee Kavanaugh.

Flake and Murkowski joined with the dark party and called for an FBI probe into the sexual allegations against Kavanaugh which has already taken place. One could argue an investigation by the Senate holds more sway than the crooked FBI. Flake said, "I think it would be proper to delay the floor vote for up to but no more than one week." The move came after huddling with Democrats after Kavanaugh's hearing. Conservative commentator Candice Owens blasted Flake on Twitter calling him a "true American coward."

Related coverage: <a href="https://thegoldwater.com/news/38160-Kavanaugh-Is-It-A-Case-Of-Winning-SCOTUS-Losing-The-Midterms">Kavanaugh – Is It A Case Of Winning SCOTUS, Losing The Midterms?</a>

Murkowski had already called for an FBI probe quickly chimed in. The bottom line is that these accusations came up right after he was nominated by Trump, who has also had false accusations made against him which he has gone to great lengths to prove are false. If this woman was so sure it was Kavanaugh who tried to rape her then she should have gone to the police when it happened, or a year later, or ten years later, not thirty plus years later.

Christine Blasey Ford is a mentally unstable woman, the product of teaching in a left-wing ideological echo chamber that is what universities have become. Flake has clearly been paid or promised something for the flip. "This country is being ripped apart here, and we've got to make sure that we do due diligence," Flake said. The country is not ripped apart by Kavanaugh any more than Trump ripped it apart when he became president.

Flake was turned by his liberal cohorts who stall anything Trump wants to do, even if it means throwing a fellow Republican under the bus. He will be gone from the Senate in January and has frequently opposed Trump. The mentally unstable Ford testified she was 100% certain that Kavanaugh was the one who sexually assaulted her, then why didn't she come forward years ago if she was 100% sure.

Senate Majority Leader Mitch McConnell (R-Ky.) must now decide whether to go forward with the vote or not. Republican's can't afford to lose another member if all Democrats vote against Kavanaugh. Sen. Joe Manchin (D-W.V.) has been another key undecided vote who announced Friday he supported a short delay. "I’m going to let the Senate handle that," Manchin said. "They’ll make their decisions. I’m sure it will all be very good."

Trump praised Kavanaugh, and he also complimented Ford saying, "I thought her testimony was very compelling, and she looks like a very fine woman." Republicans such as Senator Lindsey Graham (R-S.C.) warned that this was a new low even for Democrats and warned it would permanently change the way the Senate treats judicial nominees. Graham blasted the whole thing as a "smear campaign" because of the undeniably convenient timing to bring up something from high school.

Earlier in the day before calling for an FBI probe, Flake said he would vote to approve Kavanaugh saying, "I believe that the Constitution’s provisions of fairness and due process apply here as well. I will vote to confirm Judge Kavanaugh."

Another key vote is Democrat Senator Joe Donnelly of Indiana who said he would oppose Kavanaugh's nomination. "I have deep reservations about Judge Kavanaugh’s nomination to this lifetime position," Donnelly said. "Only 113 people have ever served on the Supreme Court, and I believe that we must do our level best to protect its sanctity."

Go ahead and take the week. The investigation should also examine Feinstein and her corrupt associates role in this smear campaign. Prosecute all violations.

Flake is taking over where traitor, McCain left off.

Flake his name says it all.

Flake is afraid of something more than his constituents. I wonder what it is? Somebody has something on him on BOTH sides & it seems he can't decide which wrath he'd rather face.