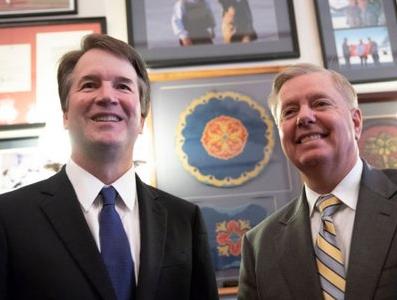 Friday, during the Committee Hearing for the Kavanaugh Vote, Lindsey Graham was one of the few who stood firm and said what needed to be said. This fiasco has gone on long enough.

Graham’s speech was epic, in my opinion. The Democrats have waged a war against anyone who doesn’t follow their ideology. They have torn Kavanaugh’s world apart for the sole purpose of winning.

The video and transcript are below. I haven’t heard a more powerful speech being given to the Democrats. I only wish it would not fall on deaf ears.

I've been doing this legal stuff most of my life.

I've never heard a more compelling defense of one's honor and integrity than I did from Brett Kavanaugh.

He looked me in the eye, everybody in the eye and he was mad and he should have been mad. He could tell you where he was at, what he was doing during high school in a way that just blew me away.

Brett Kavanaugh and women, and if you're a gang rapist when you're a sophomore in a junior in high school you don't let it go.

Every woman who actually knows Brett Kavanaugh has come forward to say he is not that kind of guy. He has been at the highest level of public service, under tremendous scrutiny, six FBI investigations, and we missed the sophomore-junior gang rapists.

We didn't miss it, it’s a bunch of garbage. We're in the twilight zone and here's what I would say. Miss Ford, all I can say about Miss Ford, I feel sorry for her and I do believe something happened to her and I don't know when and where but I don't believe it was Brett Kavanaugh and as a prosecutor you couldn't get out of the batter's box because in America before you can accuse somebody of a crime you have to tell them when it happened and where it happened and you have to prove beyond a reasonable doubt it did happen.

The reason this case will never be brought in Maryland or anywhere else, you just can't get there.

How are you supposed to defend yourself? Is the burden really on you to prove that you were not at a party 35 years ago, and they won't tell you where it was and when it was?

So all I can say is that under any reasonable standard, any concept of the rule of law this would not go forward.

There have been five allegations here.

The fifth allegation was brought to me by Senator Whitehouse who did absolutely the right thing. Somebody contacted him in Rhode Island and said, a friend of his was on a boat with Mark Judge and Brett Kavanaugh and they treated her badly.

He went down and beat him up and she won't come forward. I said well I'll make sure, I'll join with you, let the FBI look at it and turned out not to be true.

The fourth allegation was an anonymous allegation, a letter without a date or a return address sent to Cory Gardner just a few days ago, and he turned it over to the committee and somebody on that side leaked it to NBC News and it made it on the news. The fourth allegation.

That really bothers me. I don't know what's going on over there, but that's not right. It was somebody over there.

Now, about Miss Ford, I feel really bad that she wanted to remain anonymous and could not. The one thing I know for sure is that Diane Feinstein would not do this and did not do this, but I know for sure somebody did. It wasn’t chatter from a friend.

Three groups had this letter that was requested to be anonymous. Dianne Feinstein and her staff, the congresswoman from California, and her staff and the lawyers.

Somebody betrayed her trust and if you can't figure out why you shouldn't be driving.

To delay this hearing, to set in motion to the destruction of this man, to keep this seat open past the election.

That, I know beyond any, any doubt. What else do I know? I about fell out of my chair when Dr. Ford said yesterday, “I didn't know you would be willing to come to me”.

The email interactions between this committee and her lawyers, “my staff would still welcome the opportunity to speak with Dr. Ford at any time any place convenient to her come to us or we to you”.

“I'm willing to have my staff travel to Dr. Ford in California or anywhere else to obtain her testimony,” September the 19th.

Well, that wouldn't fit in the plan. It wouldn't be public and it would get over with sooner than people wanted.

I don't know what to believe but I tend to believe that Dr. Ford did not know about this invitation, and I've been a lawyer most of my adult life, and somebody needs to ask the question to her lawyers.

How could she not know about this? Are you beginning to understand what's been going on for a very long time in this case? It's not that hard to figure out.

So if this is the new standard, the accusation proves itself to those who want to ask questions, you hate women, God help us all.

If the new standard for the committee is that there is no presumption of anything that you have to prove why somebody would accuse you, not just say I didn't do it here's why I didn't do it but you gotta prove the motives of your accuser, God help us all.

The Avenatti moment tells you what's going to happen if we keep this farce going. Plenty of time, plenty of opportunities to get to the truth.

It’s the beginning of a process that will tear this country apart, and if I am chairman next year, if we keep the majority and Senator Grassley moves over, and I hope he doesn't cuz I think he's done a great job, I'm gonna remember this.

If you want to vet the nominee you can.

If you want to delay things for the next election, you will not. If you try to destroy somebody, you will not get away with it. Jeff is leaving. He is wrestled with this. He is trying to be fair.

I cannot tell you, Jeff, what happened 35 years ago I can tell you this, that through any legal system this thing would not get out of the batter's box and that everything I know about judge Kavanaugh screams that this didn't

happen and all the other things.

So to my good friend friends on the other side who are struggling, I think an FBI investigation is gonna do nothing, it's not going to tell you any more than we know now.

I'm gonna vote yes and I'm gonna tell those two daughters that I'm proud of your dad and I really really believe he's a good man.

Now I will tell Dr. Ford, I am sorry you had to go through this too.

I don’t know about you but I will definitely be voting in November. Be sure you are registered. If you have moved, be sure you have registered in your new city and/or state.

I am actually proud of Lindsay (spelling?) the last 2 days there. He actually sounded like he was on our side for a change. Imagine that?! I'm registered locked & loaded! Vote RED AMERICA!

Graham’s speech was the highlight of the week. He said everything I have been thinking through this entire confirmation process. Did his speech matter to the Senate? I think not. Those dirty nasty Democrats got their own way yet again. Now their attack will really turn nasty. I’m afraid we haven’t seen the worst of it yet. Lexy, as always your articles are spot on. Keep getting the info out, it’s time the decent Democrats woke up, if there are any left.

Truth is what I hear from Lindsey Graham, being open-minded, tolerant MEANS you recognize Truth when you hear it, not that you refuse to listen when you don’t like what’s being said, time for Democrats to be open-minded and tolerant as well as Republicans

As always a spot on article-again highlights how the left wants group-think, not individuals this hearing was about the individual Brett Kavanaugh, an individual highly qualified for nominee