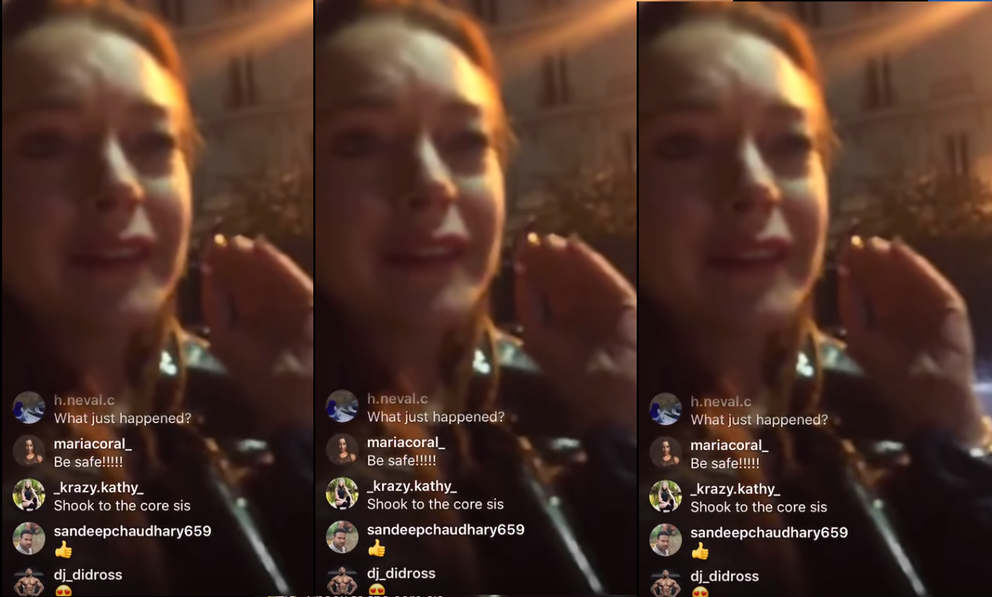 Social Media is all over Hollywood has-been Lindsay Lohan this morning. It would appear that on Instagram Live last night she tried to kidnap 2 refugee children and got pummelled by the mother of the family. She finished it all off by crying into the camera.

<blockquote class="twitter-tweet" data-lang="en"><p lang="en" dir="ltr">good morning, Lindsay Lohan accused a couple of trafficking children after they wouldn’t get in her car to go to a hotel and one of them pushed her to the ground, meanwhile the entire time she switched between english and arabic… all on instagram live <a href="https://t.co/iLSxmwelJi">pic.twitter.com/iLSxmwelJi</a></p>&mdash; Ross Francis ✨ (@rosslohan) <a href="https://twitter.com/rosslohan/status/1045941797988569088?ref_src=twsrc%5Etfw">September 29, 2018</a></blockquote>

Miss Lohan live-streamed the encounter which has by now been uploaded to every social media outlet possible. It starts off by her approaching a family sleeping on the sidewalk.

<blockquote class="twitter-tweet" data-lang="en"><p lang="en" dir="ltr">As if today couldn’t get any weirder I just watched Lindsay Lohan harass homeless people in another language on instagram live and then try kidnapping two children which led to her getting punched in the face by the mother. She truly is my favorite human being on Earth.</p>&mdash; Troy Meaz (@TroyMeaz) <a href="https://twitter.com/TroyMeaz/status/1045857118568550400?ref_src=twsrc%5Etfw">September 29, 2018</a></blockquote>

“Hey everyone, I just want to show you a family that I met,” she tells her followers.

Although the Hollywood actress at first asks if she can get them all a hotel room, events start to escalate when Miss Lohan offers to take the wife and the couple’s son with her for the night… and it gets really weird when she just wants to take the children.

“If someone is offering them a home and a bed, which is me at the moment, give it to them,” Lohan tells their parents. The bizarre thing is that she is speaking with a fake accent for most of the video.

In the end, she chases the family after which the mother turns around and pummels Miss Lohan to the floor. She finishes her live broadcast by crying into the camera.

Commenters were quick to judge: “the IG live is one of the wildest things I’ve ever seen. She’s speaking gibberish in a fake accent and trying to take two homeless boys to a hotel room against their parents’ wishes. Their mom pushes her to the ground and then Lindsey cries into the camera.”

Lindsey Lohan, whose last hit film dates over a decade ago (Herbie: Fully Loaded - 2005) has not had good press lately. In April 2016, she reportedly studied Islam and considered converting and just last year she could be seen defending Harvey Weinstein after he was accused of sexual assault.