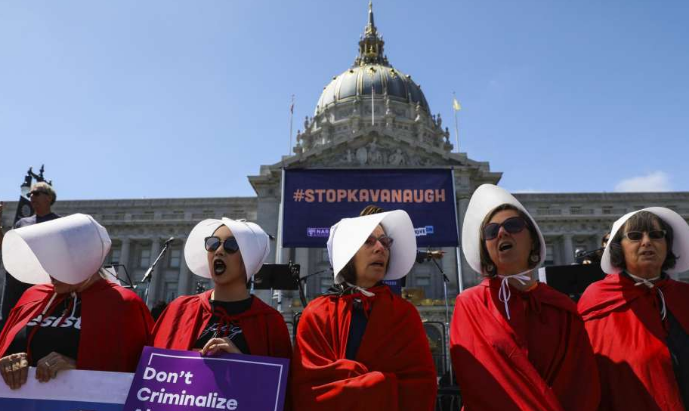 The 2015 movie ‘Ex Machina’ introduced the science fiction public to two things. Firstly, the acting skills of the lovely Danish Miss Alicia Vikander, who since won an Oscar.

Secondly, the interesting intellectual parallel made since the movie became a ‘cult’ hit, namely that the story is not so much about the fear of an AI, but the male fear of a female-dominated world.

Case in point is Brazil’s election next month, where women make up 52% of the voting population and will, therefore, be the target audience in between the first (7 October) and second (28 October) round of elections.

More importantly for US readers, this hypothesis is the case in point likely as well for the upcoming week of ‘Kavanaugh’ news. Whereas the Republicans realize that as far as their base is concerned, Judge Brett Kavanaugh is a believable and trustworthy candidate, the Senators will be looking with one eye on the chart that matters most: opinion polling and public support.

Related coverage: <a href="http://thegoldwater.com/news/38287-Kavanaugh-Who-Is-The-Elevator-Woman-Responsible-For-Changing-Jeff-Flake-s-Mind"> Kavanaugh – Who Is The Elevator Woman Responsible For Changing Jeff Flake’s Mind?</a>.

And there, they are faced with falling support from Republican female supporters who, according to those darn opinion polls, dropped their support from Mr Kavanaugh by a whopping 18 points in the week after the accusations first came out.

Given that you don’t want half of the Republican voting base to stay at home during the upcoming Midterm elections, the eyes will be on any poll showing that this support dropped further.

Of course, US President Donald Trump himself will have to be convinced to give up supporting Kavanaugh himself. And given that he prefers loyalty above anything else, that will be a very hard sell for the Republican power brokers.

Upon being nominated for the Supreme Court seat, Mr Kavanaugh expressed his loyalty to POTUS by saying: “I’ve witnessed first hand your appreciation for the vital role of the American judiciary. No President has ever consulted more widely, or talked with more people from more backgrounds, to seek input about a Supreme Court nomination.”

Knowing that the president chose his nominees from a short list vetted by conservative groups, for Mr Kavanaugh to say this demonstrates loyalty above anything else.

The following week will be very interesting indeed.

What do you think of this story? Let us know in the comments section below. 100% free speech. 100% anonymous.

Awwww the Liberal children have brought out the Protest Actors….. They're so cute. ……Just stop and think of the massive amount of IQ that went into this Protest comedy skit. The guys must have been up night sewing for their radicalized post menopausal wives that run their lives.

Opppps! on 2nd thought maybe these aren't all the nuclear family marrying types?

Either way it seems that 3% that comprise the oddest part of the population is getting 90% of the attention in the media. Which I am willing to bet has more than its share of oddities running the NEWS.

someone tell the bitches that there isn't a dime of difference between democrat pervs and republican pervs.

WHILE A PERV IS A PERV, EVIDENCE IS EVIDENCE. THAT IS WHAT IS OF THE UTMOST IMPORTANCE. I DONT BELIEVE THE POLLS FOR ONE SECOND THAT SAY FEMALE REPUBLICAN SUPPORT FELL. SMART REPUBLICAN WOMEN BELIEVE IN THE CONSTITUTION AND INNOCENT TILL PROVEN GUILTY. WHICH HAS BEEN LONG STANDING AND HISTORICAL PROCLAMATION OF A FREE AMERICA. UNLIKE DEMS WHO CLING TO IDENTITY POLITICS AND FINGER POINTING ACCUSATIONS AS THEIR MANTRA. THEIR IDENTITY POLITICS LETS YOU GET AWAY WITH CRIMES, SUCH AS IN ELLIS CASE. SINCE HE IS A DEM HE DOESNT HAVE TO BE HELD ACCOUNTABLE. EVEN WITH TONS OF EVIDENCE, LIKE PHONOTS, RECORDINGS, AND HOSPITAL RECORDS. BUT THATS OK CAUSE HE IS A DEM. THATS THE COMMUNIST TICKET!!!

This is hands down the dumbest article on the Goldwater ever and perhaps the dumbest of the the internet today. The thesis of the article is “dump men and pander to women by nominating only women”. That’s going full retard. Not only will anyone or party who does that LOSE my vote pretty much forever but I will actively work against them. GFY gender pander losers. I’m sick of all this PC BULLSHIT.

The writer also misses that women like my wife are sick of this gender pandering PC bullshit too. Nobody ever calls us for these fake polls but we vote each and every election.