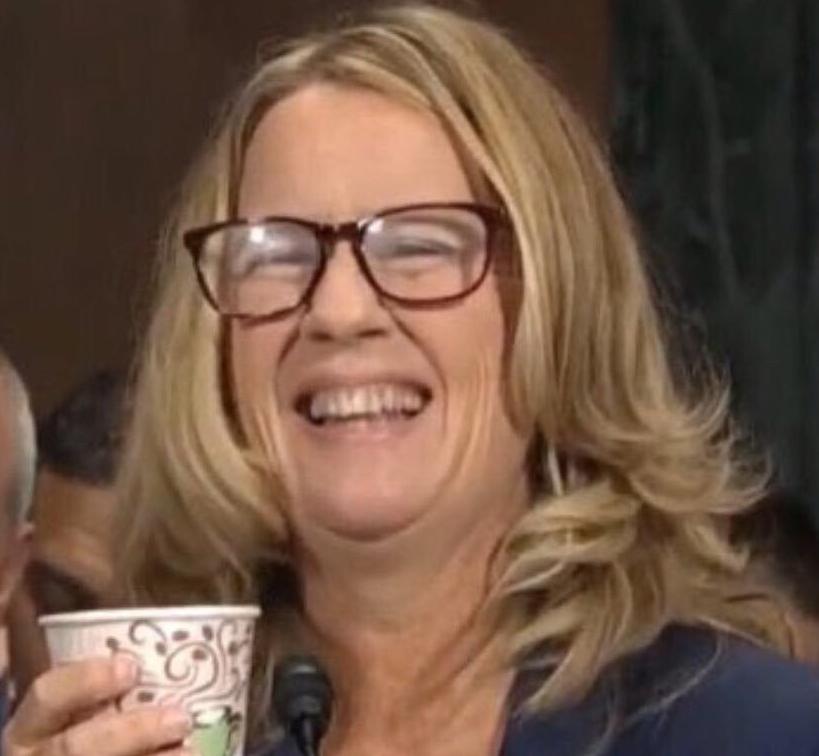 Christine Ford’s Attorney sent a letter to the Judiciary Committee objecting to having outside counsel ask the questions for Republicans at the Kavanaugh hearing.

The Attorney argued that “neither Dr. Blasey Ford nor Judge Kavanaugh is on trial. The goal should be to develop the relevant facts, not try a case.”

<blockquote class="twitter-tweet" data-lang="en"><p lang="en" dir="ltr">In new letter from Dr Ford’s Attorney to the Judiciary Committee, they again object to having outside counsel ask the questions for republicans at Thursday’s hearing, and ask for the name and resume of who that person will be.<br><br>This does not appear to be a done deal. <a href="https://t.co/MwggIeBGbs">pic.twitter.com/MwggIeBGbs</a></p>&mdash; Frank Thorp V (@frankthorp) <a href="https://twitter.com/frankthorp/status/1044392822496002049?ref_src=twsrc%5Etfw">September 25, 2018</a></blockquote> <script async src="https://platform.twitter.com/widgets.js" charset="utf-8"></script>

See the letter below:

We write in response to the email sent by Michael Davis this afternoon and the letter from you that he included.

We are finding it difficult to reconcile your letter and Mr. Davis's note with the Majority Leader's speech this afternoon on the Senate floor. As Dr. Blasey Ford has been clear since her experience was first made public, she came forward because she believes it is her civic duty, to tell the truth about the sexual assault she experienced. She is coming to Washington at your invitation to share her experience with senators as they consider a lifetime appointment to our nation's highest court. You said in your letter that you intend to provide a "fair and credible process" that provides Dr. Blasey Ford "fair and respectful treatment." Yet earlier today the Majority Leader dismissed Dr. Ford's experience as a "smear campaign," claiming mistakenly that the witnesses' statements to the Committee constitute "a complete lack of evidence," implying that there has been a thorough investigation. This and statements he has made previously are flatly inconsistent with your letter.

The refusal of the White House to request that the FBI reopen Judge Kavanaugh 's background check precluded a thorough non-partisan investigation of this matter. And the hearing plan that Mr. Davis described does not appear designed to provide Dr. Blasey Ford with fair and respectful treatment.

In our view, the hiring of an unnamed "experienced sex crimes prosecutor," as Mr. Davis described in his email, is contrary to the Majority's repeated emphasis on the need for the Senate and this Committee's members to fulfill their constitutional obligations. It is also inconsistent with your stated wish to avoid a "circus," as well as Dr. Blasey Ford's repeated requests through counsel that senators conduct the questioning. This is not a criminal trial for which the involvement of an experienced sex crimes prosecutor would be appropriate. Neither Dr. Blasey Ford nor Judge Kavanaugh is on trial. The goal should be to develop the relevant facts, not try a case.

Mr. Davis's comparison of the hearing on Thursday to the Watergate or Iran-Contra hearings is disingenuous. As you know, neither occurred in the Judiciary Committee. The Watergate hearings were conducted by the Select Committee on Presidential Campaign Activities; they lasted for months resulting in over 319 hours being televised. The Iran-Contra hearings were conducted by a joint committee of the House Select Committee to Investigate Covert Arms Transactions with Iran and the Senate Select Committee on Secret Military Assistance to Iran and the Nicaraguan Opposition that lasted 41 days. The outside counsel hired to those Committees did not come on board to ask questions of witnesses three days before the hearings started. The central point is that there is no precedent for this Committee to bring in outside counsel for the sole purpose of shielding the members of the Committee from performing their responsibility to question witnesses.

Mr. Davis still has not responded to a number of outstanding questions about the hearing, including an explanation of the role of the "experienced sex crimes prosecutor" in the Committee format. Please identify this person and ask your staff to send us her resume immediately. We respectfully request to meet with her tomorrow. We are available for a call with the Majority and Minority staff to discuss the remaining questions anytime.

Thank you for your consideration of these important matters.

Throughout the entire Kavanaugh hearing, the Democrats' only request was for an FBI investigation. That changes Ford’s attorneys’ argument. If the FBI is investing Kavanaugh as a criminal in a rape case then, by all means, we should have every available outside counsel for the other side, to investigate Ford.

Rape is a serious allegation and can ruin someone’s life on either side. It has been argued by the left that Ford has nothing to gain for coming forward with this. That isn’t true. If there is nothing to gain then why have Google, Facebook and Twitter helped by wiping the internet of any history whatsoever of her past? That isn’t an easy accomplishment so we know she has had the help of the liberal biased outlets.

She also has at least 13 <a href="https://www.gofundme.com/mvc.php?route=homepage_norma/search&term=Christine%20Blasey%20Ford%20"> gofundme </a> pages and over $75,000.00 donated to her so far. She claims for security purposes.

Judge Kavanaugh’s family has received <a href="https://dailycaller.com/2018/09/20/kavanaugh-wife-death-threats/"> death threats </a>. The messages were sent to Mrs. Kavanaugh’s work email address. The U.S. Marshals Service is pursuing the matter.

Has anyone seen real proof of the threats Ford claims she has received?

Mrs. Kavanaugh is handling this with true class. This is in no way how any liberal would handle being attacked to the point of their entire family being destroyed.

“Per our CBS News cameraman at Kavanaugh's house, his wife handed out cupcakes from Sprinkles to any of the photogs and producers who wanted them.”

Since the FBI is investigating Kavanaugh then a full investigation is warranted for Christine Ford. If she is found guilty of falsely accusing Kavanaugh of rape, let the accuser be charged with the same penalty that the accused would have received. That will put an end to this farce the left is playing.

Certainly seems like her lawyers want just a one sided investigation. Against the Judge. Thank you for another super article Lexy.

Investigate EVERYBODY involved…including Feinstein & her staffers

Oh, I feel so sorry for the Liar and her Lawyer. Not! Seems perhaps she has something to hide? Wonder who is paying for that Lawyer. The Go Fund Me page the Democrats set up for the payoff? Excellent article!

Since my first comment isn’t showing, I guess I’ll write another. I do not care what the Liar or her Lawyer think or want. We need to also follow the money. The Go Fund Me page seems the perfect way to pay off this liar for her fake smear against Kavanaugh. If they want a real investigation, start right there. Excellent article as always!

Thorough investigation on Ford and the rest of of accusers

her lawyer should then also oppose the FBI investigating Kavanaugh.

and why does she need a pos attorney if she is just telling her story?

This is stinking rotten to the core. I wanted to give Ford the benefit of the doubt but this is so one sided. The left is just asinine and in full “burn it down” mode. They figured just about any guy must have done some embarrassing shit growing up. Not the disgusting shit they are subsequently churning up but maybe flashed someone on a dare, which used to be innocent before the pc shitshow. All they thought was get someone to make an accusation from decades ago with just about zero chance of verifying. Be vague on dates, times, and witnesses. Finally employ your media superweapon to start spamming the hell out of how destructive this evil person was to the victims life. And bingo you should have easily turned a good man into the antichrist. The problem the socialists again had was assuming anyone trump would nominate must be a little trumplike, and hence they believe he has skeletons in his closet. Thank God Brett Kavanaugh was and still is one of the most detail orientated, organized, ethical, honest, and God fearing people to honor us with his service to our courts. I just hope and prey he gets his rightful spot on our Supreme Court.

These left-wing lawyers are the lowest life forms on the planet. Wait, check that. They are the most soulless, heartless and lifeless carbon-based compounds on the planet and it's unfair to include them among genuine living organisms, let alone sentient beings.

The Democrats are the spawn of Satan and should return to whatever level of Hell they left to come here.

This whole process will come back to Bite the Liberals and Socialist-Democrat's in the butt (|o|).

Voter Polls are already showing that their voters are not buying into the politically staged circus & propaganda. An it is turning fence sitters to the right.