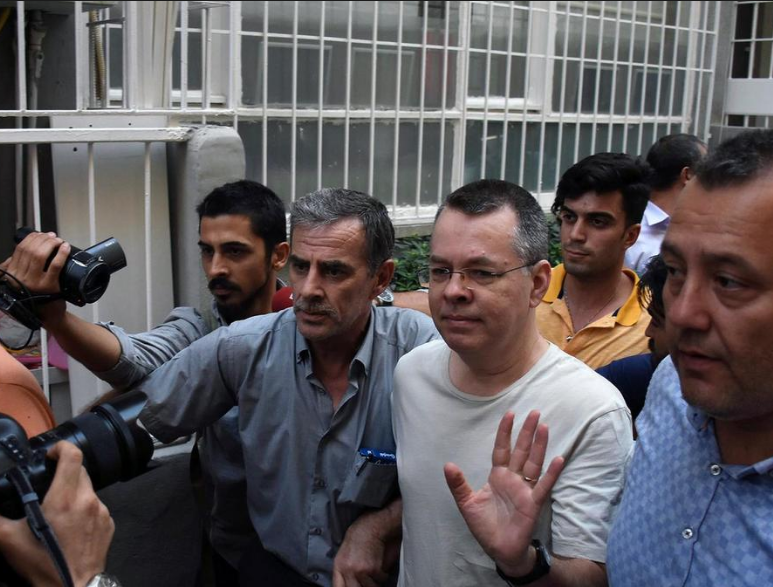 The summer in Turkey lasts a little longer than in other countries. Given its position on the globe, President Erdogan’s nation celebrates its parliamentary summer recess till the end of September in fact.

Therefore, yesterday marked his opening speech to the Turkish Parliament. Whereas just last week at the UN, the Turkish President had noted that he had ‘no possible interference’ into the investigation of jailed US Pastor Andrew Brunson and it was all ‘a matter for the Turkish judiciary,’ yesterday his words rang a tad different.

Speaking this time not to an international crowd of listeners but to a majority parliament filled with his own cronies, Mr. Erdogan claimed that the detained American pastor at the center of a bitter row between Ankara and Washington has “dark connections to a terrorist group.”

Related coverage: <a href="https://thegoldwater.com/news/34621-Trump-Vows-No-concessions-To-Turkey-Over-Brunson-Release"> Trump Vows “No concessions” To Turkey Over Brunson Release</a>.

Although international onlookers might have gotten the idea that the two countries were making progress in resolving their dispute, Mr. Erdogan decided to use his opening address to blame the US for the harsh economic conditions his country was faced with.

Mr Erdogan said it had been a mistake for the US to use “the language of threats and blackmail instead of dialogue,” and accused US President Donald Trump of using Mr Brunson, an evangelical preacher who has been detained for almost two years on terrorism and espionage charges, as an “excuse” to impose sanctions on his country.

In August, US President Trump announced punitive measures against two Turkish ministers and hiked tariffs on Turkish steel and aluminum imports after the collapse of talks to free Mr. Brunson. The new economic situation subsequently plunged Turkey into a currency crisis.

Mr. Erdogan concluded that he hopes “that we will solve the problems between us as soon as possible and we will return to building our political and economic relationship in the spirit of strategic partnership.”

Mr. Brunson’s court case will resume in the western Turkish city of Izmir on October 12.

Our prayers continue to pour out for Pastor Brunson and his family. There are many who are working on helping, but Erdogan is a slimy ****