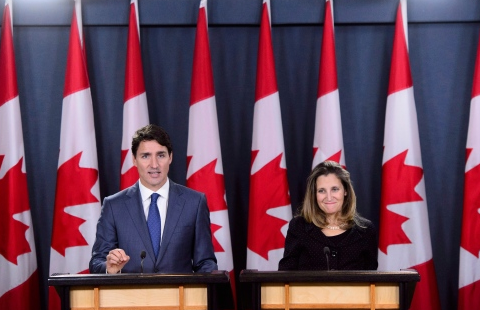 Canada - Dairy Farmers Criticize Trudeau For ‘Caving’ To US Demands

As expected, after the dust over the new US-Canada-Mexico trade deal settled (and reporting of the new Quebec Prime Minister was over) the Canadian dairy farmers took a long hard look at it and then realized that they were in for a $1 billion a year loss.

US President Trump’s negotiating style seems to have gotten the best of Liberal PM Justin Trudeau’s representative as thanks to the renegotiated Nafta (and previous accords with Europe and transpacific nations), the Canadian dairy group stated that Mr Trudeau’s government has “caved in” to US demands.

Furthermore, farmers claim that the aid packages already promised by the Liberal government amount to nothing more than a “pittance” and will not be able to cover the financial hit the industry is poised to take.

Mr David Wiens, vice-president of the Dairy Farmers of Canada, an Ottawa-based industry group that represents the nation’s 12,000 producers, said: “It won’t make up for the losses.”

“It won’t be able to do anything for the fact that the dairy industry is not able to grow and will actually shrink.”

As a result of the deal, Canadian farmers (like their European counterparts before them during the ‘butter’ negotiations of the 2000s) could now be forced to dump excess skim milk down the drain.

“How do you compensate for that?” Mr Wiens said. “There’s a lot of frustration out there.”

Over in the US, Iowa dairy farmers Mr Wayne Kramer and Ms Elizabeth Elsinger couldn’t be happier, convinced that the trade deal will give their product a boost.

Meanwhile, Mr Kramer thinks that the Trump trade deal might boost his price by a half dollar, saying: “I think we'll see a 50 cent increase in our milk price down the road right off the bat once it’s in effect.”

“We’re hopeful that some of these developments will create more opportunities for us,”

“We’re all looking for as many solutions as we can find. There’s a certain degree of belt tightening with times like this. Everybody’s trying to work harder and manage their operations as tightly as they can.”