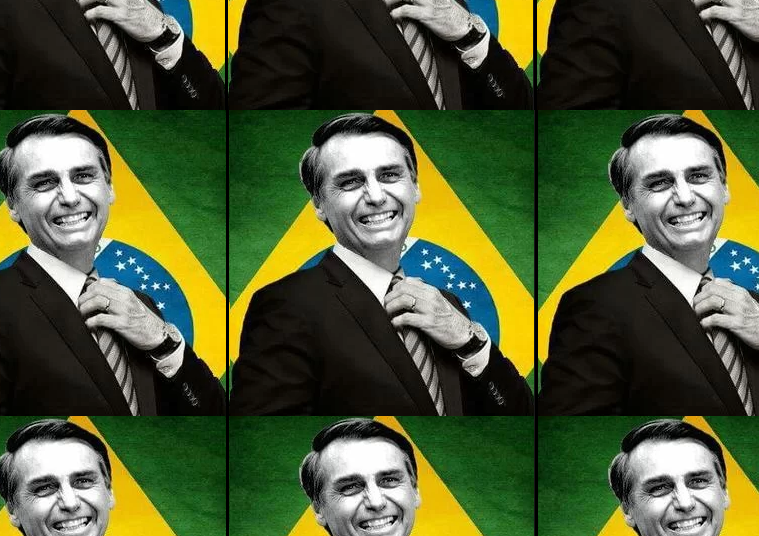 Brazil Election - “They Want To Transform Our Flag Into A Red Flag, The Flag Of Communism!”

||| Mockup by The Goldwater of Bolsonaro Election poster.png |||

US President Donald Trump wrote an opinion piece in yesterday’s print issue of ‘USA Today’ in which he slammed the normally centrist Democratic party for being too far left.

He stated: “The truth is that the centrist Democratic Party is dead. The new Democrats are radical socialists who want to model America’s economy after Venezuela.”

“If Democrats win control of Congress this November, we will come dangerously closer to socialism in America. Government-run health care is just the beginning. Democrats are also pushing massive government control of education, private-sector businesses and other major sectors of the US economy.”

Over in Brazil, where the next three weeks will decide whether the biggest Latin American nation will be ruled by the left or the right during the coming years, Mr Jair Bolsonaro referred to Mr Trump’s words when he accused his leftwing rival Mr. Fernando Haddad of trying to steer the country on the path of Venezuela and Cuba.

In one of his first comments since Sunday’s first-round win which saw him just short of winning outright and gaining 50%, Mr Bolsonaro warned his countrymen that only two paths now remain open to Brazilian voters: his path, that of prosperity, freedom, and godliness or Haddad’s, described as “the path of Venezuela.”

Related coverage: <a href="https://thegoldwater.com/news/39073-Bolsonaro-Prosperity-Freedom-Family-and-God-Or-The-Path-Of-Venezuela"> Bolsonaro: “Prosperity, Freedom, Family and God” Or “The Path Of Venezuela”</a>.

One of Bolsonaro’s sons, Carlos, echoed the message on social media: “together let’s stop Brazil becoming a Cuba or a Venezuela.”

What many seem to forget is that Mr. Bolsonaro won 46% of the vote in the first round by almost no campaigning in the last three weeks as he was recovering in a hospital bed.

As he is now free to focus on one person only, the PT’s candidate Mr. Haddad, he will play on Brazilians fears of becoming a failed communist state, just like their northern neighbor Venezuela.

“They want to transform our flag into a red flag, the flag of communism!” said Mr. Cleuzenir Barbosa, a member of Mr. Bolsonaro’s party in the state of Minas Gerais.

For evangelical voters, nothing is scarier than the supposed moral decay and “severe communism” lurking behind the PT’s “beautiful and serene words”. “Worse, I would say, than that of Venezuela or Fidel Castro,” Mr. Barbosa added.

Mr. Harold Trinkunas, a professor over at Stanford University specialized in Latin America, admitted that Venezuela’s problems are becoming “a really powerful tool for Bolsonaro to attack the PT and Haddad.”

In fact, the PT’s candidate, Mr. Fernando Haddad, has so far failed to criticize Venezuela’s government, saying to journalists: “Brazil’s role is that of a leader in this continent. We don’t need to take sides. We don’t need to declare war on any of our neighbors.”

The only problem for Mr. Haddad is that when 6 of the world’s 10 most violent cites are located in Brazil, what the population is seeking is law and order, and not a new Venezuela. Current polling states that Mr. Bolsonaro will win on 28 October with around 60% of the vote total.