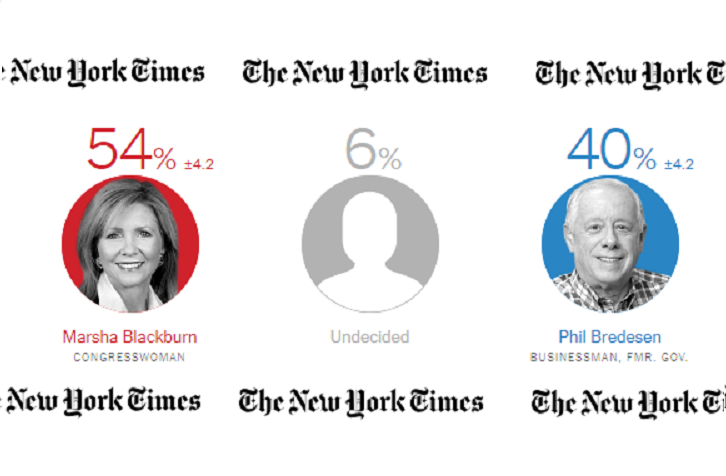 The singer, known for not siding with anyone in 2016, became politically engaged when she told her 112 million Instagram followers that she would be voting for Democratic candidates Phil Bredesen for Senate and Jim Cooper for House of Representatives in the state of Tennesee before urging her fans (and thus mostly the youngsters who have just turned 18 and can now vote for the first time) to ‘educate themselves on the candidates and to register to vote for the midterm elections,’ aka to vote for the same candidates as her.

Taylor Swift said: " As much as I have in the past and would like to continue voting for women in office, I cannot support Marsha Blackburn. Her voting record in Congress appals and terrifies me. She voted against equal pay for women. She voted against the Reauthorization of the Violence Against Women Act, which attempts to protect women from domestic violence, stalking, and date rape. She believes businesses have a right to refuse service to gay couples. She also believes they should not have the right to marry. These are not MY Tennessee values.”

The mainstream media went wild over Miss Swift’s engagement and all major news outlets picked up the advice. Evening show hosts zoomed in as well with The Daily Show’s Trevor Noah applauding her openly. Everyone was sure this would make all the difference.

Then yesterday, the New York Times decided to publish the results to see the effect of this voting advice. The subtitle to the link featuring the Tennessee poll reads: “Democrats were very pleased that Mr. Bredesen decided to run, and Republicans are worried that the race has seemed so close in a reliably Republican state.”

Related coverage: <a href="http://thegoldwater.com/news/39067-Midterms-Will-Millennials-Go-Out-And-Actually-Vote-This-Time-Video"> Midterms – Will Millennials Go Out And Actually Vote This Time? (Video)</a>.

Unfortunately for them and for Taylor Swift followers, the spike in voter registrations that the media talked about this week as a result of the pop singer’s advice did not really result in a bump for Mr Bredesen.

Ms Blackburn is up 14 points against her Democratic rival at this point and the race looks all but run.

When asked on Monday what he thought about Miss Swifts’s endorsement, US President Donald Trump said he likes her music “about 25 percent less.”

"I'm sure Taylor Swift has nothing or doesn't know anything about her. Let's say that I like Taylor's music about 25 percent less now, OK?"

This is the South.

We can still make up our own minds down here without Hollywood/Entertainer/sport figure help.

What is she the new gestapo? The thought police?

It is the same in the West. People know what`s up. Just over here on the lost coast they have the vote so cheated it`s near hopeless. Though the election of 2016 clearly showed that far more counties voted red than blue. Without the help of the illegal,deceased & multiple voters they would also lose the popular vote.