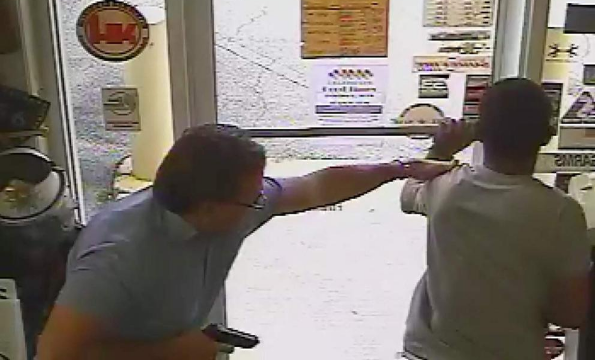 Surveillance video of the case of a Lakeland city commissioner confronting an alleged shoplifter inside an Army Navy Surplus store before fatally shooting him has finally emerged.

Lakeland police have released the said video following more than a week of uncertainties and speculations since details of the case of the shooting have mainly come from police accounts.

The video now gives the public a concrete and direct view of the shooting. It will also stand as a highly important piece of evidence that investigators are using to determine whether City Commissioner Michael Dunn, 47, should face charges or not for the killing of 50-year-old Christobal Lopez in the October 3 incident.

The video taken from inside Vets Army Navy Surplus store shows Dunn holding a gun in his right hand as Lopez was seen approaching the door. Dunn then pushes Lopez using his left arm, then Lopez makes another attempt to go to the door.

Dunn has earlier claimed that he was in fear of his life prompting him to fire shots at Lopez. Two lawyers who have reviewed the surveillance footage believe, however, that what they saw in the video may contradict what has been claimed by Dunn.

The video, however, also shows Dunn grabbing Lopez’s shoulder from behind with his left hand while Lopez manages to get out the door. Dunn momentarily loses his hold on Lopez but before the alleged shoplifter totally gets away, the commissioner is able to grab a fistful of Lopez’s shirt.

Lopez next raises his left arm to try to break free, and then Dunn appears to fire the shots.

Lopez could be seen falling to the pavement just outside the door.

When Dunn fires his shots, Lopez is seen in the video holding an object in the same right hand he used to open the door. It is still not clear if the object he was seen holding is the hatchet that he is suspected of shoplifting.

Legal experts who’ve seen the video say that while Dunn has the state’s Stand Your Ground law on his favor, the video shows that his life may not have been in danger, after all. They say the circumstances of him having control over Lopez may not justify the shooting.

Dunn was shopping for hats with his father before the fatal shooting. If arrested, Dunn could be suspended from office by the Florida governor. It would be a pity since he has only a little more than six months left on his term.

State prosecutors expect to conclude their probe by the end of next week.

THAT AINT GONNA FLY DUMBASS. YOU KILLED A MAN OVER A STUPID ASS HATCHET. YOUR LIFE WASNT IN DANGER! PERIOD!! SORRY FOR YOUR STUPIDITY!

ARE YOU KIDDING ME? THE PITY IS THAT A MAN HAS TO BE PUT INTO THE GROUND OVER SHOPLIFTING A DAMN HATCHET! THE COMMISSIONER'S LIFE WAS NOT THREATENED. THIS IS RIDICULOUS!! IF HE ISNT CHARGED ITS JUST BC HE IS COMMISSIONER. SO MUCH BS!! STAND YOUR GROUND IS ABOUT PROTECTING YOUR LIFE, NOT ABOUT PROTECTING HATCHETS! OMG!!

Sure this vato could prove to be a bad hombre with a new free hatchet & evil intent & he did the world a favor… Lopez also could have stopped… He didn`t have to be an esse guy. That was his choice. Same as it was by trying to make good on the robbery. These things have to be considered, along with any other criminal history he may or may not have.

Yet I still think… What ever happened to the good `ole pistol whip?

The photo still shows the perfect set up for a quick thump to the back of the neck, gangster goes down.

Cool heads, yes a quick thump would of been more prudent.

ACTUALLY ONE OF THOSE THINGS HAVE TO BE CONSIDERED, SINCE THEY ARE ALL "WHAT IFS". WE ARE NOT DEMOCRATS, WE GO BY FACTS AND JUST THE FACTS. A MAN LOST HIS LIFE OVER A HATCHET. THERE ISNT ANY ROOM FOR INDULGING IN WHAT IFS.

*NONE OF THOSE THINGS^^^

What I think I see……

The Thug caught stealing and still holding on to the stolen item which to me….. when I screen capture and enlarge …..looks the be the handle a shape of a AXE, Army Bayonet or small short sword.

If I were the shooter and having a split second to decide, I'd have to say I'd also shot his thug butt…. if I saw a Axe or small short sword or Bayonet in the thugs hand resisting and making sudden rotating moves towards me.

He didn't kill a man. He killed a roach.

Nothing of value was lost

Some additional facts being left out by the Liberal Left Media.

Cristobal Lopez , WAS a CONVICTED FELON, staying with his father at a homeless shelter called Talbot House Ministries near the store.

The afternoon of the shooting Lopez (death ex-felon) and his father walked to the store.

Lopez put a hatchet down his pants to steal it.

During the stealing process the hatchet fell out, the shooter (Dunn) confronted Lopez and tried to detain him.

Lopez refused and picked the hatchet up to continue out the door now openly armed with a dangerous weapon in his right hand.