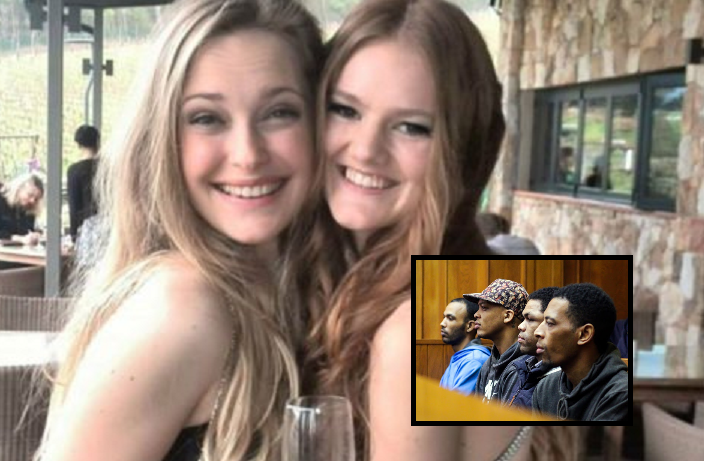 Someone who thinks of others before thinking about herself, that is how South African Cheslin March (22 years old) described his fellow student and girlfriend Miss Hannah Cornelius (pictured on the left, 21 years old).

The young woman drove him home last year after a party so that he didn’t have to cross the dark Stellenbosch area alone with his skateboard.

Unfortunately, four men robbed them. And the gangsters were gruesome in their treatment of the young student as the ongoing trial in South Africa now shows.

Mr. Marsh and Miss Cornelius had agreed to meet in a student bar on 26 May 2017.

They both studied at Stellenbosch University and went dancing afterward. Just past midnight, Mr. Marsh said he was tired and told his girlfriend he wanted to head home.

The young man first walked Hannah home and when he had dropped her off, he wanted to leave with his skateboard to his own dorm on the other side of the city. Hannah, however, though it was late and offered him a lift in her blue VW Golf. That seemed safer to her.

A bit later she parked in front of his studio and while they were chatting for a while, four men suddenly appeared. And they had no good intentions. On images from surveillance cameras, you can see how they first step past the parked car and disappear from view.

One of them suddenly stuck a screwdriver through Hannah's half-open window and he fixed it on her chest with the sharp edge. Another robber at the same time pulled open the door on the passenger side and threatened Cheslin with a knife: "Sit still or she dies."

According to the student, who now testified in court, this was the beginning of the end for young Hannah.

Cheslin was ordered to hand over his money and smartphone and was then locked up in the trunk. The gangsters then looked for the keys to the car - which Hannah had received from her grandmother for her birthday - and drove off. Hannah was in between two of them, so she could not go anywhere. The 4 stopped a short time later at a dealer to buy drugs and smoked them. Then they drove on, out of town.

Moments later they stopped in a suburb called Kraaifontein some 20 kilometers from where they had left.

Three of the robbers took Cheslin out of the trunk and dragged him into the bushes. "I had to lie on the floor, and they hit my head with stones. I closed my eyes and began to pray. Two of the guys wriggled over me with bricks in their hands. They beat me until they thought I was dead.”

Then they left his bloodied body and drove on with Hannah.

But Cheslin was not dead. "I lost consciousness and when I regained my knowledge, I was in pain everywhere," he sobbed in court. "It was awful. When I heard Hannah's voice for the last time, it sounded soft. I could clearly hear that she was afraid. "

The bloodied young man managed to stumble to a house in the neighborhood and there he sounded alarm. He did not know, however, that Hannah's body had already been found a few miles away along the side of the road and that the police were looking for both him and the robbers.

Hannah had also been found in the bushes. Three of the guys had raped her and then hit her head with a big stone. The young woman also appeared to have a stab wound in the neck.

The police quickly managed to pick up the perpetrators.

It turned out to be Vernon Witbooi (33), Geraldo Parsons (27), Nashville Julius (29) and Eben Van Nieberk (28). They are now accused, among other things, of robbery, kidnapping, rape, and murder.

Hey Melania WTF you didn’t hear about these animals during your trip? And have the balls to call out Trump for his stance on immigration instead! Reach around, grab your ear and pull hard, you might just be able to pull your head out of your ass.

Great. Blaming this on the first lady. You're about as stupid as that rock.

It's Hannahs fault for the company she kept. Look up her friend by name.

These thugs should go thru the EXACT same thing they put Hannah thru–Sick animals! You can also add 39610 as a sick animal. Also, Steve Dellar needs to read his articles before posting–Proofread please.

I tell my children to avoid the groid. And around blacks, never relax