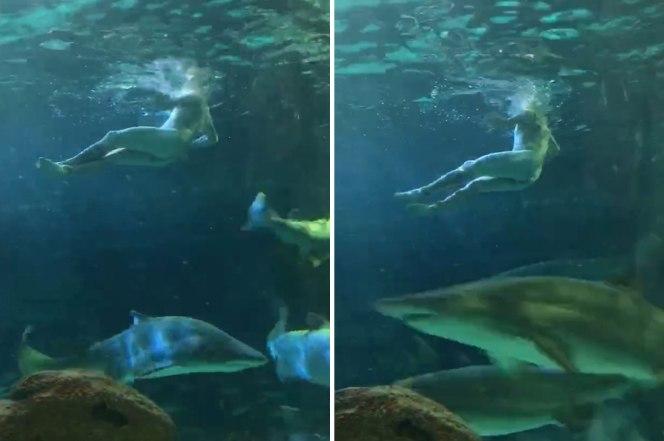 A man who allegedly committed assault against another person fled the scene of the incident only to pull off another stunt that “exposed” him literally and figuratively leading to his arrest.

The suspect created a shocking spectacle when he swam naked among sharks at Ripley’s Aquarium of Canada located in downtown Toronto late Friday, that’s after he committed a violent assault earlier in the evening and is wanted by the police.

The man “on a mission” that night to commit back-to-back bad and scandalous acts has been identified as 37-year-old David Weaver of Nelson, B.C.

Weaver was said to have headed to the aquarium right after fleeing the scene of the incident where the assault took place. A minute-long video shot at the aquarium posted on Youtube and now going viral shows a man taking off his clothes as if it’s the most ordinary thing to do even in such an area and diving into the Dangerous Lagoon as if it’s the safest thing to do like just taking a dip in one’s home pool for instance. It is not called “Dangerous” Lagoon for nothing, however, as it is a 2.9- million-liter tank that boasts of an underwater gallery to dozens of marine animals, including an astounding number of sharks - 17 in all.

The man can be seen in the video casually doing the breaststroke on the surface of the water while sand tiger sharks swim within centimeters of his feet.

Sensing the danger of Weaver’s stunt potentially both to him and to the species in the aquarium, security personnel asked him to leave before 10:30 p.m. But there was just no stopping his madness then, and he decided to extend his little adventure further.

Weaver swam to the edge of the enclosure and emerged from the tank only to do a backward flip into the water.

That’s when aquarium staff decided he had enough fun for the night, and called the police to report his dangerous exhibition.

One of the visitors of the aquarium at that time of Weaver’s stunt was left horrified and stunned. Erinn Acland said she saw Weaver appearing to be “totally nude” and looked like he was having such a swell time by laughing.

Acland added: “I don’t know what would possess someone to do that. It’s totally insane to me. I was scared I was going to witness the death of this guy.”

Weaver finally got out of the water just before the officers arrived. He was not able to go scot-free however for boldly pulling such a stunt. Especially not after he’s wanted on an assault incident earlier.

The assault happened outside the Medieval Times attraction at Exhibition Place around 8 p.m. on Friday where the victim sustained serious injuries.

Jenniferjit Sidhu, spokesperson for Toronto Police Service said that while no animals were harmed with Weaver’s stunt, what he did was “extremely dangerous.”

Weaver first fled his alleged crime, but he sure has a way of exposing himself, making his arrest a lot easier for authorities. He made it so much easier to come to him, without having to search long and hard.

He made history, too, as the stunt he pulled off was the first of its kind in the five years since the aquarium opened to the public.