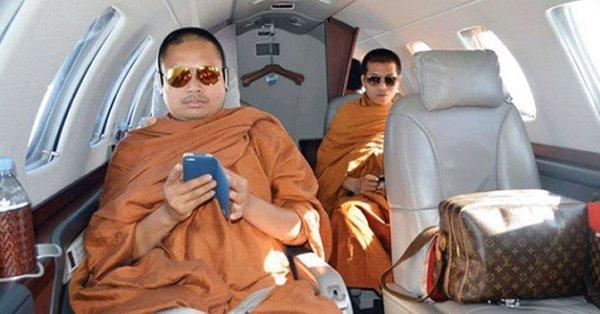 Thailand - Jet-Set Monk Jailed for Rape of Girl He Impregnated

The former Buddhist monk famous for his lavish lifestyle who raped a 13-year-old girl and got her pregnant will now have to answer for his crimes following a Thai court decision to sentence him to two eight-year prison terms.

Ratchada Criminal Court in Bangkok sentenced Wirapol Sukphol for violating a minor under 15 and for rape.

The ruling said that prosecutors charged the former monk for abducting a 13-year-old girl and sexually assaulting her from January 2000 to the middle of 2001. The girl became pregnant around 2001.

Wirapol became notorious when he appeared in a Youtube video in 2013 wearing his monk’s robe while aboard a luxurious private jet, while also sporting a high-end aviator sunglasses and with an expensive Louis Vuitton bag by his side.

Wirapol was defrocked in the midst of allegations that he had sexual relations with women and that he had even impregnated one - glaring violations of the principles and values that should be guiding a monk’s holy behavior.

The former monk is already serving a lengthy prison term as it is after the same court sentenced him to 114 years in August for fraudulently raising funds from his followers.

The court ruled him then guilty of fraud, money laundering and violation of the computer crime act for taking money he had solicited intended for Buddhist statuary and temple improvements but spending the money instead on lavish personal items like cars and other luxury goods.

<blockquote class="twitter-tweet" data-lang="en"><p lang="en" dir="ltr">Abbot Wirapol Sukphol was just sentenced to 114 years for buying a private jet and Louis Vuitton with the huge donations he got from his wealthy followers. He had fled to the US but ended up getting caught and extradited. <a href="https://t.co/dLJudoduqA">pic.twitter.com/dLJudoduqA</a></p>&mdash; 𝐜𝐞𝐜𝐢 𝐧&#39;𝐞𝐬𝐭 𝐩𝐚𝐬 𝐀𝐧𝐧𝐚 (@YesThatAnna) <a href="https://twitter.com/YesThatAnna/status/1045021378628354050?ref_src=twsrc%5Etfw">September 26, 2018</a></blockquote>

His sexual victim, now 32 years old, expressed satisfaction with the court ruling against her tormentor. She has also filed a separate lawsuit against Warpol asking him for child support since he had stopped making payments for childcare.