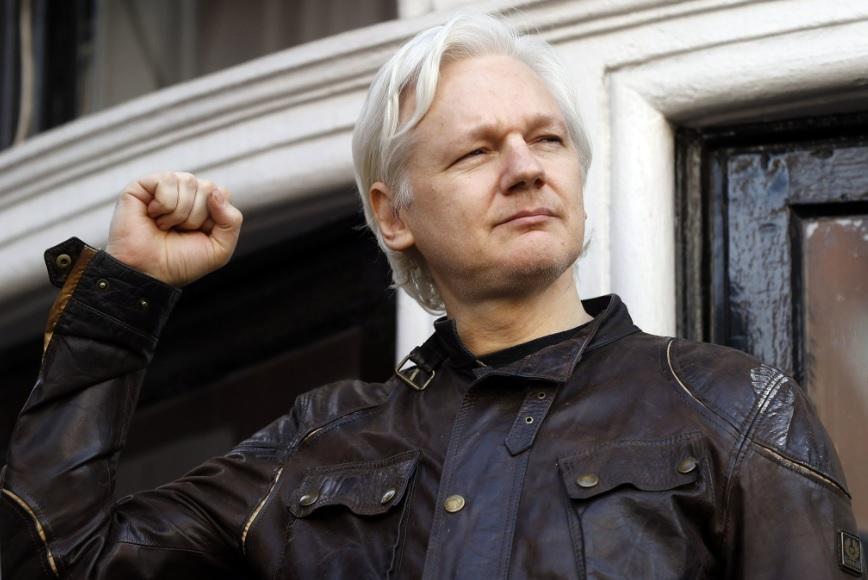 Government documents released by the Ecuadorian official reveal the country tried to extricate Julian Assange from the Ecuadorian embassy in London to the country's embassy in Moscow, Russia. The WikiLeaks founder has been in limbo for the last five years and recently Ecuadorian President Lenín Moreno revealed that he had begun talks with British officials to withdraw Assange's asylum.

The plan to smuggle the Australian computer programmer behind the infamous WikiLeaks website was to name him as a political counselor to the Ecuadorian embassy in Moscow but the 47-year-old's near escape was thwarted when British authorities vetoed his diplomatic status. Assange has been seeking asylum at the Ecuadorian embassy in London to avoid extradition to Sweden for alleged rape charges.

The charges in Sweden have since been dropped but the British government is not willing to let Assange off the hook for failing to turn himself in to authorities and hiding in the Ecuadorian embassy.

Related coverage: <a href="https://thegoldwater.com/news/32524-Ecuador-President-Says-Assange-Must-Go-Not-To-Be-Executed">Ecuador President Says Assange Must Go, Not To Be Executed</a>

The latest Ecuadorian government documents that outlined the plan to extricate Assange to Russia were made public by Ecuadorian opposition lawmaker Paola Vintimilla. Vintimilla is very outspoken about her opposition to her government's decision to grant Assange nationality making her no friend of the WikiLeaks founder.

The documents help corroborate a recent report by the Guardian that Ecuador attempted an elaborate scheme to smuggle Assange to Moscow in December of last year. Russian diplomats expelled the notion as "fake news" but the government files show Assange's appointment as "political counselor" to the Ecuadorian embassy in Moscow was approved complete with a $2,000 monthly salary.

This is far from the country's only attempt to get Assange out of their embassy without getting him arrested. Assange says he fears for his life since his website is responsible for publishing numerous leaked documents, many of which were classified and belonged to the United States government and other powerful nations.

Assange's attempt to escape to Moscow were thwarted by Britain’s Foreign Office. A letter from UK officials dated December 21, 2017, said they "do not consider Mr. Julian Assange to be an acceptable member of the mission". The attempt was summed up in an eight-page memo to Vintimilla that determined Assange's attempt to escape Britain as a counselor was ditched a few days later.

WikiLeaks has not publicly remarked on the release of the Ecuadorian government documents pertaining to the Moscow escape plan and neither has the British Foreign Office or the Russian embassy in London. Assange developed a loose relationship with Russian officials when he was the subject of intense scrutiny after Donald Trump was elected president.

The reason for the shaky alliance was that Russian spies are alleged to have been the source of the leaked Hillary Clinton emails. This made both Assange and Russia a target for the left in America who saw the leaks as an attempt to help elect Clinton's rival, Donald Trump. Democrats are still itching to get at Assange and even released a letter to Ecuadorian President Moreno calling for Assange to be handed over to the "proper authorities".

Despite the allegations and Assange's supposed ties with Russian authorities, the WikiLeaks founder denies receiving the files from the Russian government. He also denies being a Donald Trump supporter or backing his presidential campaign. His opponents accuse him of receiving the leaked Clinton emails directly from Russia’s military intelligence agency and even coordinating media strategy with Trump's son.

Some of WikiLeaks own internal files were made public last month showing that Assange tried moving to Russia as early as 2010, far before Trump announced an intention to run for office. But the campaign to destroy Assange continues with even major media sources publishing "fake news" about him. After the alleged abduction, torture, and murder of Saudi Arabian journalist Jamal Ahmad Khashoggi, Assange has to be wondering what the future holds in store for him as his alliance with the Ecuadorian government grows weaker each day.