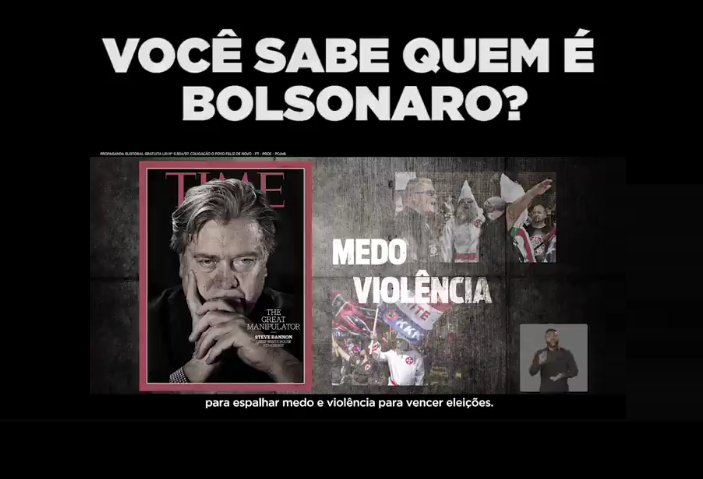 With the election only 10 days away and Mr Fernando Haddad, the leftwing candidate of the ruling Workers Party trailing by a good 20%, the heavy attack ads have been launched.

Set against ominous dark backgrounds and showing pictures of klu klux klan members making Nazi salutes, a narrator asks viewers: “Do you really know who Bolsonaro is? Do you know who supports him?” before then responding: “Steve Bannon.”

“Steve Bannon is accused of sabotaging democratic regimes around the world. He uses fake news to spread fear and violence to win elections.”

“Bannon is a specialist in spreading terror around the world. Bolsonaro has spent the last 30 years doing this in Brazil.”

The video furthermore shows images of people being tortured and was clearly created to scare Brazilians of what would happen in a nation governed by Mr Bolsonaro, a former army captain.

Although Mr Bolsonaro’s camp stated immediately that any direct link between Mr Bannon and himself should be seen as ‘fake news,’ there was indeed an Instagram picture a few months ago that suggested otherwise. At that moment, it was Mr Bolsonaro’s son Eduardo who posed with Mr Bannon and stated: “We had a great conversation and we share the same worldview. Mr Bannon stated that he was an enthusiast for Jair Bolsonaro’s campaign and we will certainly be in contact to join forces, above all against cultural marxism.”

The problem is that only this Tuesday former Ku Klux Klan leader David Duke stated that he very much liked Mr Bolsonaro, saying “he sounds like us.”

<blockquote class="twitter-tweet" data-lang="en"><p lang="en" dir="ltr">I refuse any kind of support coming from supremacist groups. I suggest that, for consistency, they support my adversary the candidate of the left party, who loves to segregate the society! This is an offense with Brazilian, the most beautiful and mixed race people in the world.</p>&mdash; Jair Bolsonaro 1️7️ (@jairbolsonaro) <a href="https://twitter.com/jairbolsonaro/status/1052250624308510720?ref_src=twsrc%5Etfw">October 16, 2018</a></blockquote>

In response to the news, Mr Bolsonaro tweeted: “I refuse any kind of support coming from supremacist groups … This is an offense with Brazilian, the most beautiful and mixed race people in the world.”

Brazil votes in the second round of its presidential election on Sunday 28 October. If polls are to be believed then Mr Bolsonaro will win with a landslide 60% of the votes.

He's a drunk and a civ-nat minded boomer. Trump was smart to fire him.

Actually, if he's sabotaging anyone, it's totalitarian Communist regimes; just like the ones the Left want to create here.