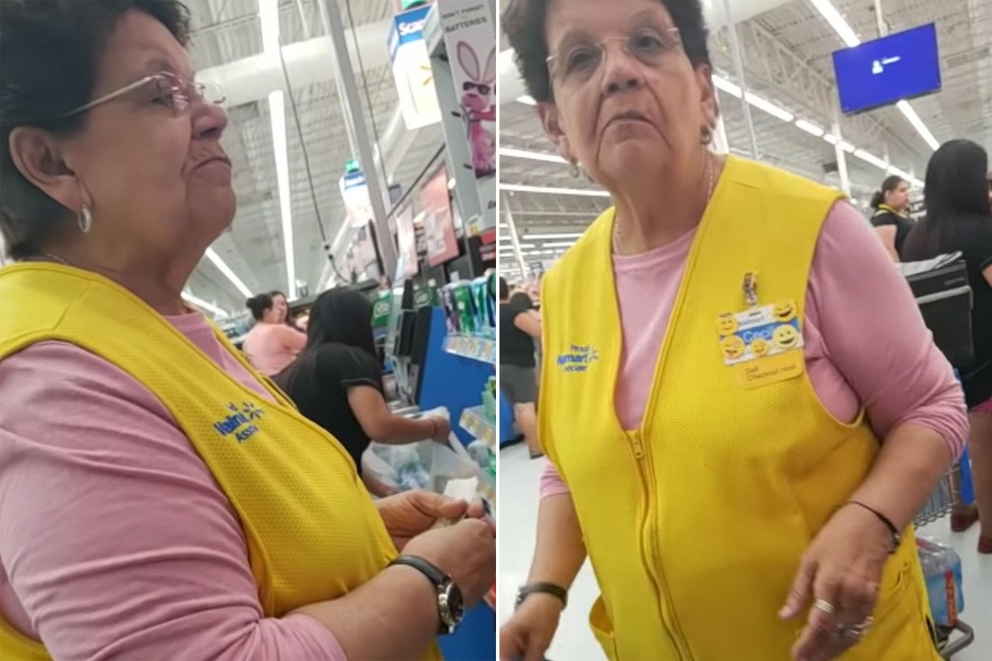 An El Salvador native living in Texas shared on social media his experience in a Walmart store where an employee admonished him to speak English “because we’re in Texas.” The guy recorded part of their exchange and uploaded the video, too, on social media sparkling reactions and debates among users. The man said he is also receiving threats because of what he posted.

Joel Aparicio posted a 40-second video clip of his confrontation with the employee which happened on Sunday at a Walmart store in Pasadena. Trouble started when Aparicio experienced problems with the store’s self-checkout machine.

Aparicio asked the store employee if she spoke Spanish and the worker answered in the negative. She fixed the problem with the machine before leaving him. However, a glitch with the machine happened again and the employee came back to help him, but not before telling him that he shouldn’t be in the United States if he couldn’t speak English.

Aparicio then decided to record the remaining of their conversation. He asked the employee “if it’s necessary” to speak English inside the store. The employee shot back, “yes, because we’re in Texas.”

Aparicio pressed, “Only because of that?”

The employee appeared to be getting upset with Aparicio for continuing to speak in Spanish, repeatedly telling him “no” and then reminding him again to speak English.

The employee also said before leaving Aparicio: “I don’t know which way you’re going to pay” before gesturing to the direction of the cash register.

It didn’t end there as Aparicio appeared to go on an offensive and then made reference to the woman’s apparent lack of “green eyes” before stating that “she didn’t have the look of someone who only spoke English.” The employee again responded, “I live in Texas, so I speak English.”

Aparicio has spent 13 years in Houston, and also said that he’s been going to the same Walmart branch for 10 years already. He said that it was the first time “he was treated that way.” He added: “They’ve always been friendly.”

His post on social media, however, did not exactly gain sympathy and support from social media users. Aparicio said that he even received threats from someone who introduced himself as the employee’s grandson.

Casual social media users also slammed Aparicio, with some defending the woman and suggested he might have been rude to her because she’s been known to speak both English and Spanish during her long years with the megastore. Some also said that Aparicio should “learn to speak English if that’s big of a problem.”

Others also insisted that Aparicio was to blame, after all, arguing that his “refusal to assimilate” led to the altercation.

<blockquote class="twitter-tweet" data-lang="en"><p lang="en" dir="ltr">And what about it? When in Rome, do as the Romans do. If you&#39;re not interested in learning the language and integrating into the culture of the country you&#39;re immigrating into, then why are you even there? Makes it look more like an invasion than immigration.</p>&mdash; AuroraStorm (@AuroraStorm_) <a href="https://twitter.com/AuroraStorm_/status/1053210960201101312?ref_src=twsrc%5Etfw">October 19, 2018</a></blockquote>

Some did agree with him, however.

Aparicio reported the threats he received to the police.

Walmart officials for their part said the matter will be handled internally.

13 years of expecting to have his tantrum catered to. You should speak english because it's obvious you do and you are just acting like an entitled prick. She was right to tell him off.

When I go to a foreign country, I got with THEIR language, unless they know English. I love this woman. I am glad she is a fellow Texan. Peace and God bless.

Texas is tje USA. The WW employee may not speak mexican

She is correctomundo!! Speak English, beotches!

Last time I checked this was America, the melting pot, of many languages, not just English. Especially Spanish in Texas. If Walmart wants to make an issue of it, then they should take down all there signs in Spanish. She was just being an ole bitty, since she knows how to speak Spanish. In fact since they are in Texas, she was probably hired for being bi-lingual and probably gets paid more money for it.