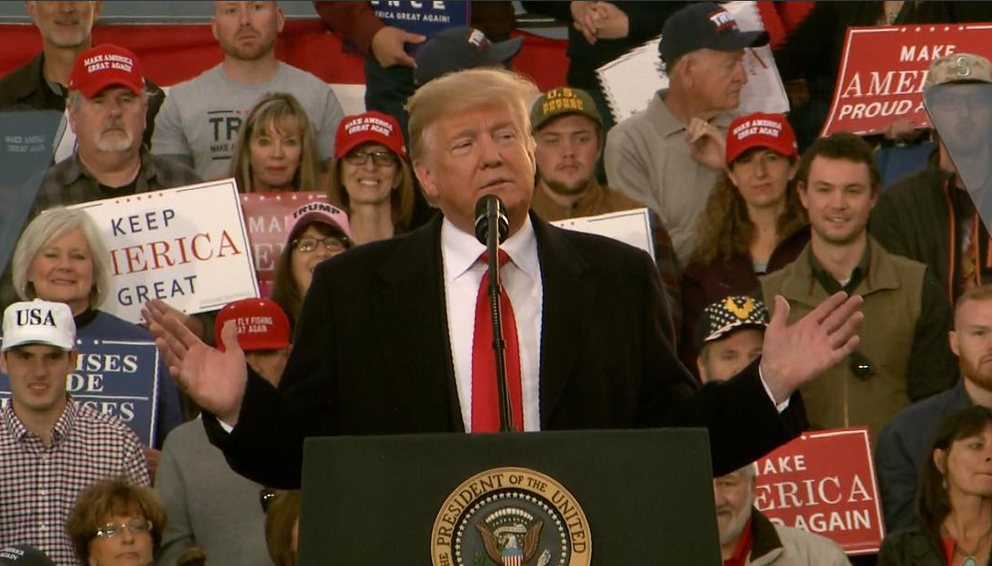 Mainstream media worldwide lost their cool as US President Donald Trump praised Republican congressman Greg Gianforte for body-slamming a reporter last year. The US President reminded the audience, to “Never wrestle him.”

"Any guy that can do a body slam… he's my guy," he said to cheers and laughter at a MAGA rally in Montana.

The US President could then be seen mimicking a person being thrown forcefully to the ground.

56-year-old Mr Gianforte pleaded guilty last year to assaulting the journalist from the UK's Guardian newspaper just before he was elected. For the action, of which only audio footage exists, Mr Gianforte was ordered to pay $385, complete 40 hours of community service and 20 hours of anger management counselling.

Mr Trump was told at the time that the body slam would hurt Mr Gianforte’s chances, to which he responded: "I was in Rome when I heard about it, and I heard that he body slammed a reporter!"

"I said wait a minute, I know Montana pretty well, I think it might help him - and it did".

The Guardian newspaper blasted Trump for making fun of the incident. It released a statement saying: “To celebrate an attack on a journalist who was simply doing his job is an attack on the First Amendment by someone who has taken an oath to defend it,”

“In the aftermath of the murder of Jamal Khashoggi, it runs the risk of inviting other assaults on journalists both here and across the world where they often face far greater threats.”

Oh, I'm sorry. The left can atrack any one on the right, including a man grabbing a women, and shooting Scalise, but when it's done back at them, then it's not ok. What a crock! Double standard left as usual!

The incident in question had reporter forcing his body in the path of the congress man repeatedly trying to povke him. He did it seems. An it help get him elected. Thanks MSMZ for help us win that one also.

As an Englishman and former Guardian reader, let me say: the Guardian sucks. Big time.

I'm not a Democrat, and I'm not a Republican, and I'm not an independent or a libertarian. I'm none of those things, because I don't believe in that entire system. I'm simply a human being, and sometimes I even wonder about that. I would have to be honest about this, and say that I find it simply distasteful and kind of strange that Trump with black such self-awareness and self-control, that he would actually joke about causing injury to a reporter right in the middle of an international controversy like Saudi Arabia murdering an American citizen who happens to be a reporter. no matter what political side you're on, you would be lying if you denied that Trump is a fucking idiot.

Trump is the greatest ever! Support Trump, slam the msm vermin (verbally)

>>39787 RE: Greatest Ever- thank you for demonstrating your lack of experience. you must be new to planet Earth.

Attacks on reporters will only get worse MSM.

After instigating so much violence and helping to create more division than has been seen in centuries you deserve every beating you receive.

>>39806 reported to the FBI. that was literally a terroristic threat. wow, you're a complete idiot.

Shouldnt you be at shul rabbi? Or chewing off a foreskins perhaps??