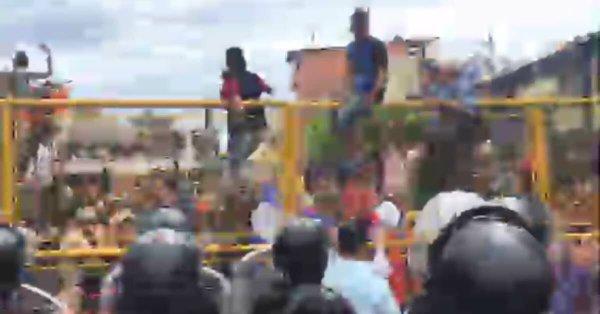 The head of Mexico’s federal police reports that they have been successful in their first goal of preventing a violent breach of the border by close to 3,000 migrants attempting to enter from Guatemala and reach the U.S.

Speaking from the Mexican border town of Ciudad Hidalgo, Manelich Castilla told media that the migrants “will enter in an orderly fashion.” He added: “’It will be under the conditions that have been said since the start: orderly, with established procedures, never through violence nor by force.

Still, there were some migrants who became somewhat unruly as they pushed their way through the Mexican side forcing police deployed there to use pepper spray.

Some migrants were also seen forming lines on Friday on the bridge while others are just sitting down and poised to bear the long wait.

Despite many assurances given of a peaceful caravan, the migrants coming from Central America managed to break through a Guatemalan border fence and streamed by the thousands toward Mexican territory on Friday, defying in the process the authorities’ call for an orderly migration and President Donald Trump’s threats of retaliation.

The authorities were ready to tackle the migrants, however, as a phalanx of police with shields met the migrants arriving on the Mexican side of the border bridge. Still, nearly 50 migrants were able to aggressively push their way through before officers pepper sprayed them, forcing the rest to retreat.

A federal officer took the loudspeaker to address the restless group after the gates were closed and firmly said: “We need you to stop the aggression.”

The migrants waving their Honduran flags and carrying umbrellas as protection from the sweltering heat made their arrival earlier at the Guatemalan side of the muddy Suchiate River that separates their country from Mexico. They loudly demanded to be let in, with some declaring their confidence that “one way or another, we will pass.”

Some of the young men even managed to tear down the fence, allowing men, women, and children to rush through and toward the border bridge just up the road.

Some police officers became hapless from the sheer number and force of the migrants. One of the first to race past the Guatemalan police was Edwin Santos of San Pedro Sula as he clutched the hands of his father and wife.

Santos even screamed his sense of jubilation as he said “We are going to the United States! Nobody is going to stop us!”

His words, sentiments and thinking perhaps best capture the collective psyche of the caravan migrants hoping to enter the U.S. - that if they so wish, by the strength of determination, or the dictates of their whims, they’re gonna make it just like that, laws and processes be damned.

Why do they march under the flag they claim oppresses them? Mexico will show their true color, yellow, addressing the insurgent communist invaders. Send in Warthogs and plow them off the road.

I was thinking the same thing as . An army of violent invaders refusing to be civil and forcing their way thru a border should be gunned down. Shooting a dozen or so of the loudest shitheads in the front should send a message to the followers. Hell if even 3 idiots were trying to force their way into your house they stand a good chance of getting shot. These 3k+ paid aggressors need to see how serious a crime it is to enter illegally. If they are true asylum seekers, one they would need to stop at the 1st neighboring country, not pick and choose by skipping over some. And second, I’d expect them to be barefoot, skinny, and destitute. Not fat, happy/angry, well dressed for the area, and toting smart phones. This is soros a paid shill maneuver! A bunch of this shit could be avoided if soros and his ilk were “warthogged”! Brrrrrrrrrrrrrt!!!!

I saw thousands of people in those videos, but the numbers of women, children, & elderly are surpassed by far by what we, in the 3/5th Air Cav AeroScouts in 1970 used to call "Military-Age Males", and some very aggressive ones at that. They did not give me the impression of poor villagers who just want asylum and safe shelter. We need to meet them at our border, if Mexico doesn't stop them first, with full military battle-rattle and let them know what we think of their "demands". They probably have been told to camp out there and throw stones at our Border Patrol, like the Palestinians have been doing for years in Israel, so the Mockingbird MSM can film them and create a media circus to use as leverage against The Wall and our ICE policies.

Hurricane Willa is currently a powerful tropical cyclone that is threatening southwestern Mexico.

On October 21, Willa became a Category 4 major hurricane. It further strengthened to Category 5 intensity at 15:00 UTC the next day.

Fuck those Hondurans. They need to try to make Honduras great for once!!!