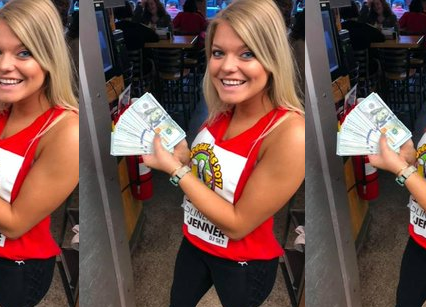 A perennially broke college student from East Carolina University tries hard to make both ends meet by working part-time as a server in a hotdog eatery near ECU. On Saturday, a man walked in and merely ordered two bottled water. Little did the working student knew then that she’s in for one big, happy, pleasant surprise as the customer who ordered so little left an astounding $10,000 tip in cold cash.

The incredible story happened on Sup Dogs restaurant in Greenville, North Carolina. The customer just had a few sips of the water then left a note and the unprecedented huge tip. The note read: “thanks for the delicious water.”

Turned out, the man was no ordinary customer, but YouTube sensation, “Mr. Beast” known for randomly giving out large amount of money and filming recipients’ reactions and uploading the videos on the social media platform where he has close to nine million followers.

The lucky server that day Mr. Beast decided to pull off another of his mind-boggling acts of generosity, ECU student Alaina Custer, couldn’t believe it at first. She recalled: “I literally didn’t think it was real. I picked it up and it was a giant stack of hundreds. I was shaking and just kept asking Brett, ‘What is this?’ I thought someone was playing a joke on me.”

Brett Oliverio is the restaurant owner. He said they’ve had their share of generous tips, Mr. Beast’s tip was “the biggest ever” they’ve received. The last big tip given by a customer was $500. Oliverio quoted Mr. Beast as saying, “Good people are still doing good things these days.”

Custer kept a portion of the tip for herself and shared the rest with her co-workers.

Custer was such in a state of disbelief that she didn’t easily notice that two men on another table were filming her reaction to the generous tip. She went to them to ask them what was going on with the astounding tip and all, and they merely told her they were going around blessing servers’ days and asked her to subscribe to Mr. Beast’s YouTube channel.

Mr. Beast and his companion came back to the restaurant shortly after and Custer gave them all a hug.

Custer was still euphoric and said: “I was so blessed to have that money. I mean most of us that work at Sup Dogs are broke college kids and that’s going to help me out so much. We got to all split it up, which will help a lot of people.”

Mr. Beast, only known as Jimmy of North Carolina, has done multiple videos featuring large donations such as dropping $20,000 from a drone, tipping a pizza delivery person with $10,000 in cash, giving $30,000 to his favorite Twitch streamer, etc.

The video of the Sup Dogs tip has not been uploaded yet.