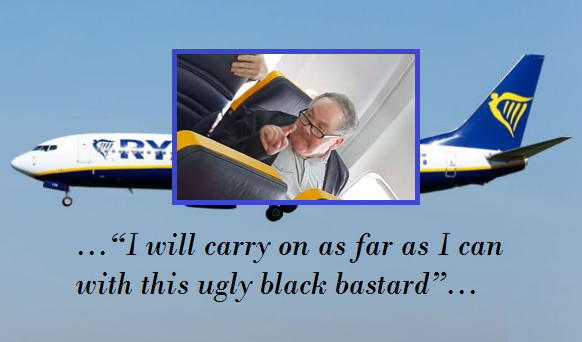 Incidents filmed onboard Europe’s largest budget airline Ryanair are nothing new, but this time around it might end up differently for the airline itself, as the fury over this latest happening is growing. An online boycott has many people signing up over it.

It all started when a man was filmed hurling racial abuse at an elderly black woman on a flight from Barcelona to London, calling her an ‘ugly black bastard’ whilst stating to the Ryanair personnel he refused to sit next to her. Surprisingly, the flight attendant moved the elderly woman to another seat while most people agree that they should have just thrown the man off the flight.

<blockquote class="twitter-tweet" data-lang="en"><p lang="en" dir="ltr">What a joke. Mrs Gayle &amp; her daughter have been told to contact <a href="https://twitter.com/Ryanair?ref_src=twsrc%5Etfw">@Ryanair</a> Customers Services. CEO Michael O&#39;Leary should be calling them to apologise profusely for the incompetence of his flight attendant in handling this racial abuse incident properly. <a href="https://t.co/siKVYeeJR3">https://t.co/siKVYeeJR3</a></p>&mdash; Margaret Ferrier SNP (@MargaretFerrier) <a href="https://twitter.com/MargaretFerrier/status/1053945578382598144?ref_src=twsrc%5Etfw">October 21, 2018</a></blockquote>

The video, which has been viewed millions of times over the weekend already, shows a man shouting at an elderly black woman to move seats, while her daughter tells him her mother is disabled.

He then shouts: “I don’t care whether she’s f** disabled or not – if I tell her to get out she gets out.”

As the argument unfolds, the man becomes racially abusive, saying: “Don’t talk to me in a f** foreign language you stupid ugly cow.”

As other passengers try to calm him down, he shouts: “I will carry on as far as I can with this ugly black bastard.”

In the end, Ryanair personnel moves the woman and her daughter to another row where they can sit next to each other, while a number of passengers on the flight call for the man to be removed from the flight.

As the video went viral in the UK over the weekend, many politicians have voiced their concern at Ryanair’s apparent lack of action. A Labour MP tweeted: “He should have been removed from the flight and handed over to the police. We assume the aircraft was in the UK. If it was he definitely committed criminal offenses. I fully expect Ryanair to confirm the situation if in fact, it was their flight.”

good white people are angry over the jigaboo invasion of their clean, safe white countries. where i live they imported UGLY, FAT, THIEVING, HOARDING HAITIANS. they are sub-human things….