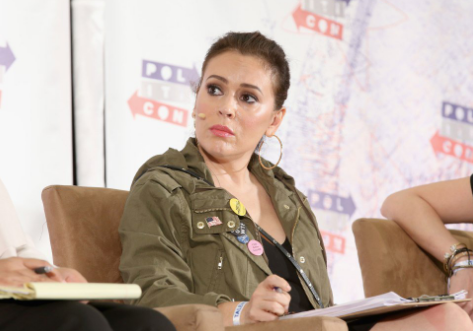 A few weeks ago, when there was a debate ongoing about whether or not Mr Steve Bannon should have been disinvited to a New Yorker festival, I remember watching a BBC panel discussion about it. Whereas both the presenter and the person defending the conservative standpoint agreed that both sides should be heard in the global nationalist versus liberal debate which seems to be going on in the developed world ever since the British people voted for Brexit and the US citizens elected Donald Trump as president, the progressive commentator did not agree and said there was never a place for right-wing views in media.

That standpoint seems to go for the progressive side of Politicon in Los Angeles as well.

When ‘Me Too’ and ‘Time’s Up’ activist Ms Alyssa Milano was asked to disavow fellow progressive thinker Ms Linda Sarsour for her repeated support of sharia law which denigrates women, the microphone was quickly banned from conservative interviewer Ms Laura Loomer.

Ms Milano was on a panel speaking about “Me Too” and “Time’s Up” at Politicon in Los Angeles, and at the moment of the Q&A part, Ms Loomer stepped up to the plate and said: “My question is for you Alyssa Milano. You are friends with Linda Sarsour, both of you ladies have positioned yourselves as speakers and representatives of the Me Too movement.”

“I want to ask you right now to disavow Linda Sarsour because she is a supporter of Sharia Law. And under Sharia Law women are oppressed, women are forced to wear a hijab.”

“My question is, will you please disavow her because she is advocating for Shariah law.”

Ms Sarsour is the Muslim co-founder of the Women’s March as well as the former executive director of the Arab American Association of New York. She has repeatedly failed to criticize shariah law (Check Quora, Wikipedia or many previous news articles about Ms Sarsour for proof).

Ms Milano, who could be seen during the Kavanaugh hearings trying to politicize the event for the progressive side of the Democratic party, stated in response: “She’s not, but thank you so much for your question.”

Wanting to immediately end the topic, the forum’s organization called security on Ms Loomer and ushered her out of the hallway.

As Ms Loomer was led outside of the venue, Ms Milano stated: “I wish you well, God bless you.”

Anyone in support of Islam & Sharia law is a traitor to humanity.

There is no compromise with this Islamic belief that is set in it`s way to destroy all non-believers by any & all means. Be it by force, subversion or destruction in the guise of good. Plainly seen as they divide peoples to implement their hellish way of life on all.

Why these religious fanatics even turn on themselves when one sect believes another to be more liberal in the treatment of non believers.

It`s time to wake up & cast all these types out, along with the NPC voices & talking heads that keep promoting such a destructive mindset.

Alyssa Should go to the Middle East and see how long she lasts or just leave the US. Would not miss her.

Ms. Loomer should be a model for Journalism but sadly most of them can't break free of their masters.