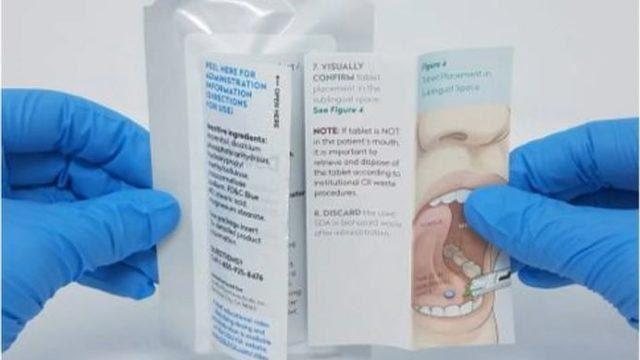 FDA Moving Forward With Approval Of Strongest Opioid On Market

FDA recently announced approval of DSUVIA, the strongest opioid on the market. The drug is composed of sufentanil which is stronger than fentanyl and 500 as strong as morphine. The 30mcg tablet comes preloaded in a plastic applicator used to deposit the medication under a patient's tongue.

FDA's Anesthetic and Analgesic Drug Products Advisory Committee recommended approval via a 10-3 vote, final decision is scheduled for November 3rd. The FDA generally follows the Advisory Committee's recommendation but has no obligation to do so.

Speaking out against the drug is committee chair Dr. Raeford Brown who worries that the dosage form would make it divertible, allowing it to end up in the hands of those who don't have a prescription.

"The agency feels that there is a capability, so far not demonstrated, to regulate this drug so that it is used only in closely controlled settings," the letter read. "In order to have this happen, the education of all prescribers would need to be guaranteed.

"This has not been demonstrated with any other opioid and, given the lack of teeth in the current risk evaluation and mitigation strategies for opioids, there is currently no educational nor regulatory scheme that will guarantee that this drug will be used only as described in the label."

The drugmaker, AcelRX believes concerns are unfounded, but the 13.7% drop in their stock prices by the time of the closing bell on Friday underscores the lack of faith in their pronouncement.

Newsweek reported on the story days ago and neglected to mention that the drug's design was specifically for ease of use in a battlefield setting. The tablet is stronger and faster acting than intravenous morphine. The plan for the AcelRX product would be for it to be only distributed in medically supervised settings like hospitals, ambulatory surgery centers and by battlefield medics.

Despite this, Dr. Brown points to the FDA's difficulty in preventing diversion of powerful and addictive opioid substances. Also, despite the current plans for the use of the drug, it is notable to mention that fentanyl was first developed specifically for use only in late-stage chronic cancer patients before FDA Commissioner Scott Gottlieb lobbied for Fentanyl manufacturers Cephalon on two separate occasions to not only allow more of the drug to be manufactured but to expand the category of patients it could be marketed to.

<a href="https://www.marketwatch.com/story/as-powerful-new-opioid-nears-fda-approval-critics-ask-if-us-is-stoking-its-drug-crisis-2018-10-20">Brown spoke to MarketWatch</a> invoking the transmucosal fentanyl spray designed solely for cancer patients explaining that "there was no controlling that drug once it came to market. In reality, once a drug is marketed, the FDA has no control over it. Then it becomes the [Drug Enforcement Administration’s] problem, and the DEA has enough problems with trying to keep black-tar heroin out of the country."

Proponents of the drug point to the fact that it was initially developed in conjunction with the Department of Defense for battlefield use and that it actually <a href="http://www.acelrx.com/products/sufentanil.php">has a higher therapeutic index</a> than fentanyl which may make it safer than fentanyl and morphine in proper dosages and in therapeutic settings.

Both the Newsweek nor the MarketWatch article further failed to discuss that sufentanil has a higher therapeutic index than fentanyl and morphine (25,000 compared to 300 and 70, respectively), which makes it much safer than fentanyl and morphine. That said, according to PubMed health it has a high risk for addiction and dependency associated with its use and side effects can include but are not limited to, restlessness, muscle spasms, chest pain and fast heartbeat.

<a href="https://fdaheadlines.com/a-roller-coaster-called-acelrx-pharmaceuticals-inc-nasdaqacrx/">The website FDA Headlines described AcelRX's last week of trading</a> as a "roller coaster" but noted that ACRX has released a statement that it “stands by the safety, efficacy and medical need for its investigational therapy, DSUVIA. Developed in collaboration with the Department of Defense, DSUVIA potentially represents an important non-invasive, rapidly acting alternative to IV opioids, the current standard of care for acute pain management in medically supervised settings.”

You really did it this time!

Dope up Americans on even stronger sheeit.

As if the opioid crisis needs help in getting any worse.

One must ask themselves is all that dough worth creating so many more addicts.

Well to these pharmaceutical companies it clearly is profits, above all else.