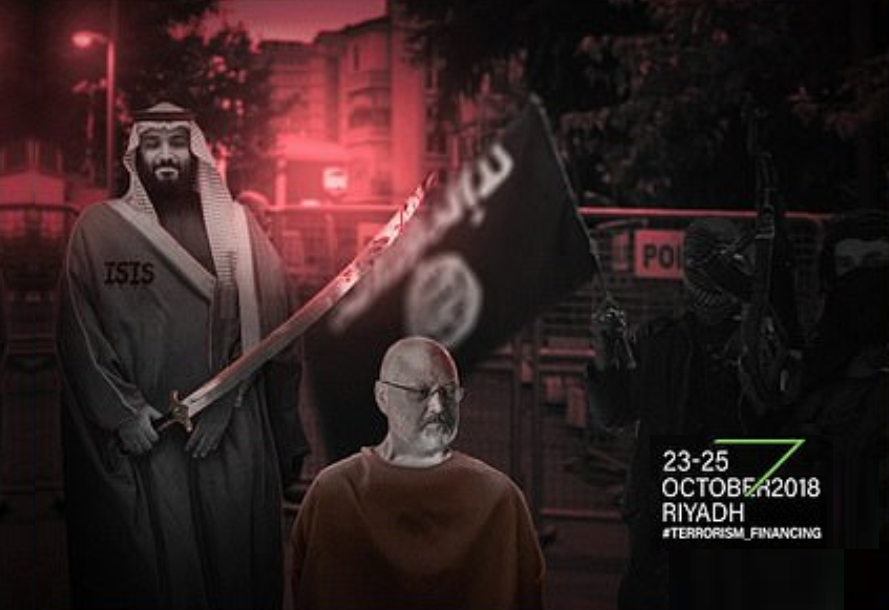 MBS or Mohammed Bin Salman, the crown prince of Saudi Arabia, saw himself portrayed as the executioner of Washington Post journalist Jamal Khashoggi when the website of his ‘Future Investment Forum’ was hacked overnight.

The welcome text of the Forum was replaced with: “For the sake of security of children worldwide, we urge all countries to put sanctions on the Saudi regime.”

“The regime, aligned with the United States, must be kept responsible for its barbaric and inhuman action, such as killing its own citizen Jamal Khashoggi and thousands of innocent people in Yemen.”

It is just one of many signs that the future ruler of the Saudi kingdom is coming under worldwide scrutiny for his alleged role in what is now admitted as being a ‘botched murder’ committed by someone within the ‘House of Saud.’

The Future Investment Initiative also is known as “Davos in the Desert” after the original Switzerland-based investment conference held yearly, was supposed to start later this week but many western companies have pulled out of participating given the news about the murder of the Washington Post journalist.

Furthermore, the silicon valley tech companies that have received billions in investment from Saudi Arabia are also coming under intense scrutiny as many of the social media behemoths have yet to declare what they think of the Saudi action.

Traditional Dow Jones companies have pulled out their visitors early as they depend less on Saudi investment but the likes of Facebook, Twitter and Google have not made it known where they stand just yet.

Currently, Saudi Arabia has acknowledged that Mr. Khashoggi had been murdered, but continues to declare that the Saudi leadership had not been aware of the "rogue operation" performed by a group it claims to have no control over.

"The individuals who did this did this outside the scope of their authority. There obviously was a tremendous mistake made, and what compounded the mistake was the attempt to try to cover up."

This is ridiculous. Saudis are pure evil, but to make one lost CIA asset writing for the Washington Shitpost the centre of outrage is insane. There are so many reasons to oppose the Saudi regime and this is the weakest one. If the corporate marxists in charge want popular support in their condemnation of Saudi Arabia then they are doing it wrong.

Not only that, but since I initially heard this story, I learned that he was a member of the Muslim brotherhood. Not a good thing to be slaughtered like that no matter who you are.. That's what makes us different to the Islamic cretins. We're not barbaric. Well, the majority of us anyway. As for the Saudis, they are long overdue the critical spotlight and further investigation will reveal some more horrors im sure so , the situation is a win win for the West.