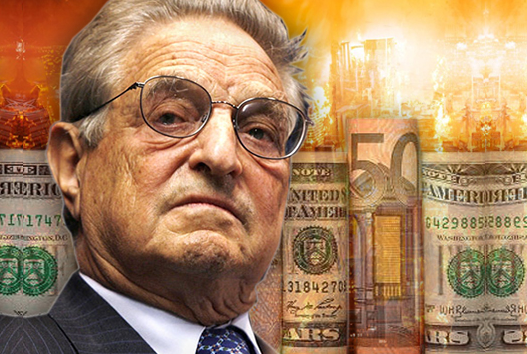 New York police admitted they have by now safely destroyed a suspected letter bomb which was found at the home of billionaire liberal businessman George Soros. The package was discovered in a postal box by an employee of the leftwing donor. the staff then alerted the authorities before taking it to a nearby wooded area.

Due to the seriousness of the threat, the incident is now being investigated by the FBI.

The FBI’s New York field office declared that they were “conducting an investigation at and around a residence in Bedford, NY”.

“There is no threat to public safety, and we have no further comment at this time.”

A Bedford Police Department official confirmed the news, stating: "An employee of the residence opened the package, revealing what appeared to be an explosive device."

His support for liberal causes has made Mr Soros a frequent target for criticism by right-wing groups whom regularly publish his home address online.

The now 88-year-old Hungarian-American businessman (whose also despised in his home country where he regularly squares off with Prime Minister Viktor Orban) earned his fortune through shrewd financial speculation and famously bet against the Bank of England that the pound would take a massive hit in September 1992.

At the time the billionaire shorted the pound which subsequently had to be devaluated. It was the equivalent of Mr Soros taking some 20 pounds over every man, woman and child in the British isles.

<blockquote class="twitter-tweet" data-lang="en"><p lang="en" dir="ltr">Lying New York Times. &quot;His main goal as a political activist was to see a return to bipartisanship&quot; Soros stated years ago that he &quot;hated America, and everyone in it&quot; and that his lifelong goal was to destroy America. Soros is a minion of Satan. <a href="https://t.co/MjxtiDXLwG">https://t.co/MjxtiDXLwG</a></p>&mdash; Steven Rahn🐸 (@Darkohako) <a href="https://twitter.com/Darkohako/status/1054649388927086593?ref_src=twsrc%5Etfw">October 23, 2018</a></blockquote>

Ever since making his billions, Mr Soros has been funding human rights projects and liberal democratic ventures around the world.

He also became one of the largest donors to the US Democratic Party, backing the presidential campaigns of Barack Obama and Hillary Clinton whilst labelling current US President Donald Trump "an imposter".

Conspiracy theorists have long accused Mr Soros of secretly engineering a range of events in US and global politics.

With all the political termoi and hate going on, Ilts only a matter of time before the violence escalates further. I wonder if this even concerns Soros.

Want to wager that he did it himself or a liberal did it for him for sympathy?

Shame it didn't go off.

Better luck next time.. Even though i believe he hired someone to plant a dud.. But its a step in the right direction. The left WILL eat their own (;

I love the scripture that says:

1Why do the heathen rage, and the people imagine a vain thing? 2The kings of the earth set themselves, and the rulers take counsel together, against the LORD, and against his anointed, saying, 3Let us break their bands asunder, and cast away their cords from us. 4He that sitteth in the heavens shall laugh: the Lord shall have them in derision. 5Then shall he speak unto them in his wrath, and vex them in his sore displeasure. 6Yet have I set my king upon my holy hill of Zion. 7I will declare the decree: the LORD hath said unto me, Thou art my Son; this day have I begotten thee.

I LOVE BECAUSE THAT IS WHAT THE RULERS OF THE NATIONS HAVE DONE. PLOTTED AGAINST THE PEOPLE… AND THEN GOD GAVE US DONALD TRUMP : )

And this one too:

The heathen are sunk down in the pit that they made: in the net which they hid is their own foot taken.

GOD IS SO GOOD AND HAS A GREAT SENSE OF HUMOR.

How much longer can this old evil codger live?

Bullshit. This is nothing more than attempt to stop Trump from telling the truth about Soros. His spokes person came out today and said the politicians need to tone down the rhetoric. The man should have been shot, for crimes against humanity. NO sympathy for that piece of shit, especially over a lie.

Bullshit. This is nothing more than attempt to stop Trump from telling the truth about Soros. His spokes person came out today and said the politicians need to tone down the rhetoric. The man should have been shot, for crimes against humanity. NO sympathy for that piece of shit, especially over a lie.