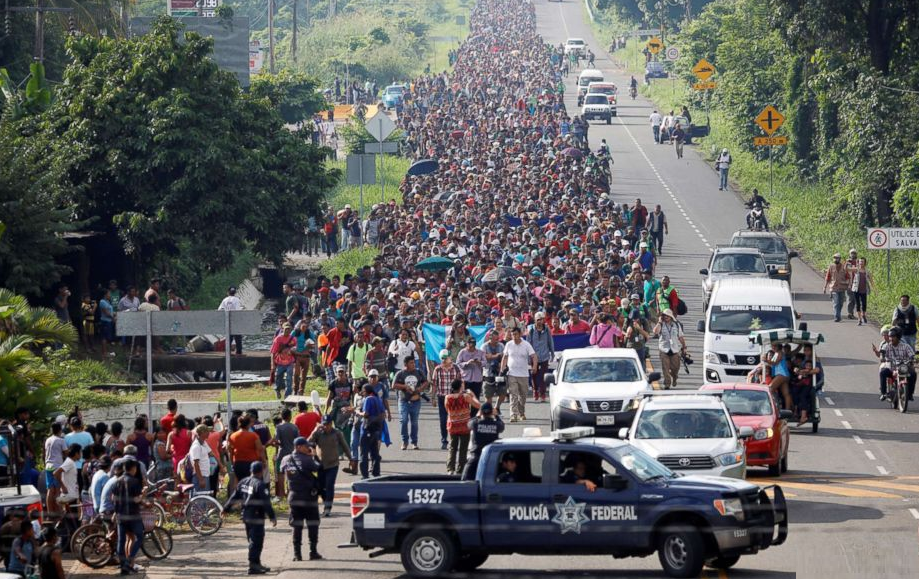 Democrats Silent As Growing Migrant Caravan Continues Towards US (Video)

Currently already 7,000 strong, reporters from AFP travelling with the caravan say that a two to three thousand group of other immigrants will soon join it on its trek to the US’s Southern border. In all, it means that population of a midsized town will soon be once again on their way, a crowd too large for any Mexican police force to handle.

Many non-governmental organizations are proposing help to the thousands of migrants marching daily towards the US. Some are offering busses, but the Central Americans fear that getting on such a bus equals deportation and thus they continue their walk on foot.

Mr Jose Mejia, a father of four from Honduras: "We are going to sleep here in the street, because we have nothing else."

"We have to sleep on the sidewalk, and tomorrow wake up and keep walking. We'll get a piece of plastic to cover ourselves if it rains again."

Mexican president elect Mr Andres Manuel Lopez Obrador, who is due to take office on 1 December, proposed that the United States, Canada and Mexico would work out a joint plan for funding the development of the poorer areas of Central America and southern Mexico as "in this way we confront the phenomenon of migration, because he who leaves his town does not leave for pleasure but out of necessity."

In interviews made along the journey, many of the Central American migrants stated they are fleeing widespread violence, poverty and corruption. Unlike former mass migrations towards the US southern border, this caravan is one of an unprecedented large number and largely began spontaneously through word of mouth.

Meanwhile, the US Democratic party appears to largely remain silent on the issue of the migrant caravan heading for the Southern Border.

Mr Steven Law, head of the Republican Senate Leadership Fund, said: “Democratic opposition to strong immigration security has been a very effective issue for us in Senate races this year.”

“I don’t see how the spectacle of a massive horde trying to bust our borders on the brink of a national election remotely helps Democrats.”

Mr Leon Fresco, a former aide to Democratic Senate Leader Mr Chuck Schumer, admitted that there is concern within the party to show too much empathy “People who are swing voters are not comfortable with politicians defending people in the caravan. It’s a very difficult, nuanced argument to try to get all those things across.”

“But if Democrats switch and say the caravan is a direct result of Trump’s immigration policy, that would shut Republicans down completely.”

these folks aren't destitute. they are FAT and healthy enough to walk a thousand miles. they have homes and jobs but want an SUV and big house at OUR EXPENSE. FUCK THEM. Globalist filth at the UN are funding this madness. i hope Hurricane Willa kills them all.

This is an outright lie: "and largely began spontaneously through word of mouth." This is organized and paid for by the Soros left.

It was the Destructive Dimms who created this possibility.

They prefer high crime, sickness, birth rates, & a flooded welfare system, to fill the greedy pockets they all have, on what is essentially blood money. Big bucks gained on the backs of the working class. Money made off the misery of others.

The Republicans are certainly not much better as they have been complacent to most of this.

Time for all the politicians to get behind the law abiding citizenry and act in Patriotic ways. Otherwise get your ass out of office so we can put patriots place.

By the people for the people with the betterment of mankind always in mind.

Not this hypocritical garbage that we`ve been feed for so long, in the guise of the greater good. Yeah greater only for the high powered elite.