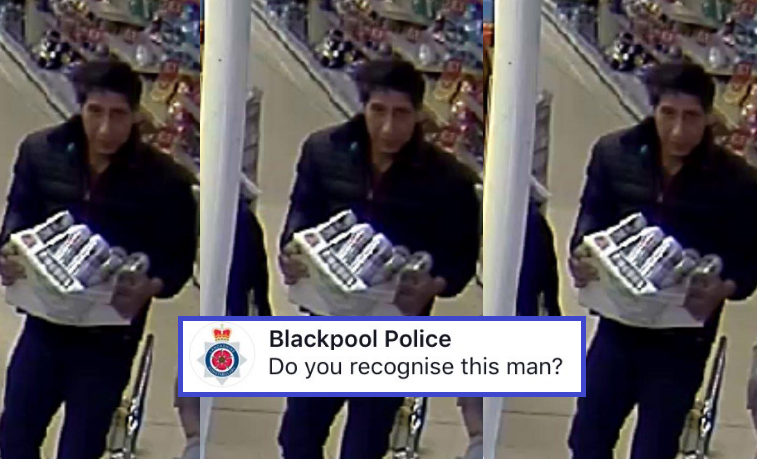 The internet went into overdrive after Blackpool Police posted a wanted picture on their website in relation to a thief who stole some cans of lager from a restaurant a few weeks ago with the question: ‘Do you recognize this man?’.

The reason for the great number of replies was because the person in the image looks like the spitting image of Ross Geller, one of the stars of 90s sitcom Friends.

The operator of the police’s Facebook account was in on the joke and replied after the first 700 comments “thank you to everyone for your speedy responses. We have investigated this matter thoroughly and have confirmed that David Schwimmer was in America on this date. We’re so sorry it has to be this way.”

This response however just invited more fans of the iconic series to join in worldwide. By the end, the police received help from about 50,000 internet users.

We have gathered some of the funniest responses.

Nick Croston: "I don't think it's been this guy's day, his week, his month or even his year."

Olly Byrne: "I'm surprised you've not found him… it's like you're always stuck in second gear."

Chris Allen: “I heard his getaway driver was stuck in 2nd gear.”

John Jones: “You would think someone would be there for him when the rain starts to fall.”

Jay Murdoch: "Apparently the police had him cornered then he performed a pivot maneuver and escaped."

Katie Power: ‘Could he BE any more like Ross?’

Tamara Poli: “The One Where Ross Became a Thief.”

The reply to this (which quickly received 83 likes) was another Friends joke: “Ah come on, don’t be like that, I’ll be there for you….”

David Schwimmer starred as Ross Geller in the iconic series ‘Friends’ from 1994 to the show’s finale in 2004.