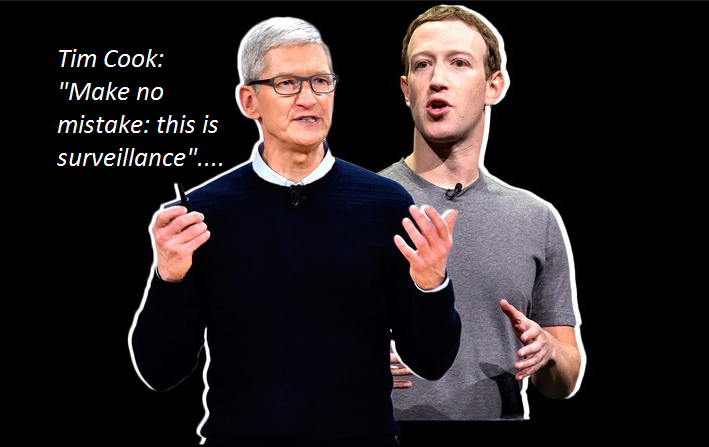 Apple Sounds Alarm: Data Being ''Weaponised With Military Efficiency'' Against You

Apple CEO Mr. Tim Cook spoke at the International Conference of Data Protection and Privacy Commissioners in Brussels this morning, where he slammed his Silicon Valley competitors Facebook and Google for hoarding the personal data of its users.

Mr Cook demanded that the White House administration would implement some tough new US data protection law, in an unusual speech in Europe.

Referring to the misuse of "deeply personal" data and clearly sticking it to Facebook, Google and Twitter, Mr Cook claimed people’s likes were being "weaponised against us with military efficiency."

Related coverage: <a href="https://thegoldwater.com/news/38535-Facebook-Sued-By-Woman-Who-Says-They-Lured-Her-Into-Sex-Trafficking"> Facebook Sued By Woman Who Says They Lured Her Into Sex Trafficking</a>.

"We shouldn't sugar-coat the consequences. This is surveillance."

To the public’s amazement, the Apple executive who took over from the deceased legend Mr Steve Jobs described in agonizing detail what he called Silicon Valley’s "data industrial complex", where billions of dollars were traded on the basis of people's "likes and dislikes", "wishes and fears" or "hopes and dreams," all of these were then stored like data points tracked by tech firms and advertisers.

Mr Cook said the current situation "should make us very uncomfortable, it should unsettle us."

The Apple boss commended the European GDPR law, which came in place earlier this year and places very strict rules on how personal data is handled by businesses and organisations.

"This year, you've shown the world that good policy and political will can come together to protect the rights of everyone. It is time for the rest of the world, including my home country, to follow your lead.”

"We at Apple are in full support of a comprehensive federal privacy law in the United States."

The White House administration just a few weeks ago warned social media firms that a regulatory law would be drafted if they didn’t shape up. Many of them have been caught this year in data protection breaches, most notably Mr Zuckerberg’s Facebook.