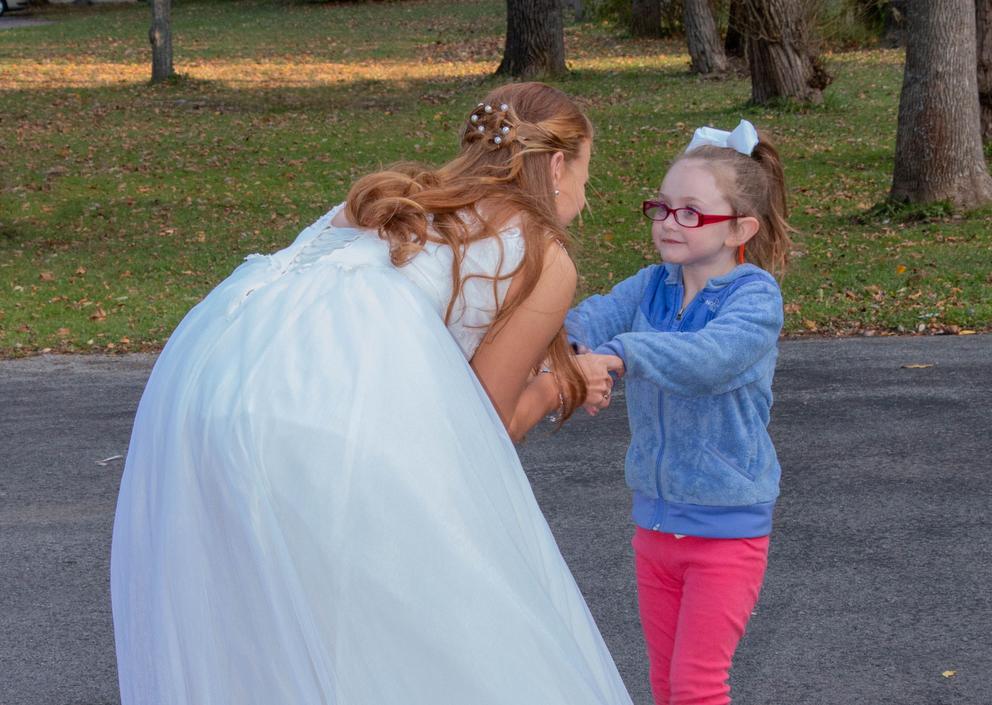 The touching story of a 5-year-old girl with autism being smitten with a bride whom she mistook as Cinderella is now going viral. Now people are donating money to send the lovely girl to Disney World so she could see other fairy tale princesses.

After their wedding ceremonies and before proceeding to the reception, New York newlyweds Olivia and Caleb Spark dropped by the Akron Falls Park to take photos. A little girl suddenly just ran up to Olivia shouting, “Cinderella! Cinderella!”

The girl was 5-year-old Layla Lester, who has autism. Her mother shares that Layla often has difficulty interacting with strangers, but perhaps she was so mesmerized with Olivia her shyness was overshadowed by her joy of seeing a “princess” come alive right in front of her.

Layla’s mother, Jessica Lester, says the little girl is really fond of princesses. The photographer accompanying the newlyweds then took photos of Layla’s interaction with her “Princess” Olivia.

Olivia told Layla that she had “a ball to attend to” that’s why she needed to leave the park soon.

The new wife was also touched by the little girl’s innocence and joy. She shared to local media “I was flattered. I was in tears that she thought I was a princess, and it just made my day absolutely more amazing than what it already was.”

Olivia’s mother-in-law shared the story on Facebook the day after the wedding. She said that her son and daughter-in-law would like to find the mother-and-child at the park so they can give her the photos of Layla and Olivia together taken by the photographer. She asked her friends and contacts on Facebook to help them locate the mother and daughter duo.

People who’ve read the story did not only help find the Lesters, but also went the extra mile to put up a GofundMe called “’Help Send Layla to Disney World” which has so far raised more than $3,000 at present.

Layla and Jessica met up again with Olivia in the park. Even without a gown, the little girl delightfully recognized Olivia and exclaimed, “Cinderella is here!” The also agreed to go out for lunch soon, and it’s cool with Layla so long as there will be cookies for her.

There are no details yet on Layla’s would-be trip to Disney World, but for sure as arrangements are being made, it is an experience that Layla will cherish and enjoy.

She has autism because her single feminist mother had her when she was 35 years old.

Since I became a grandfather, I tear up and have become a marshmallow when stories like this appear.

Since I became a grandfather, I tear up and have become a marshmallow when stories like this appear.