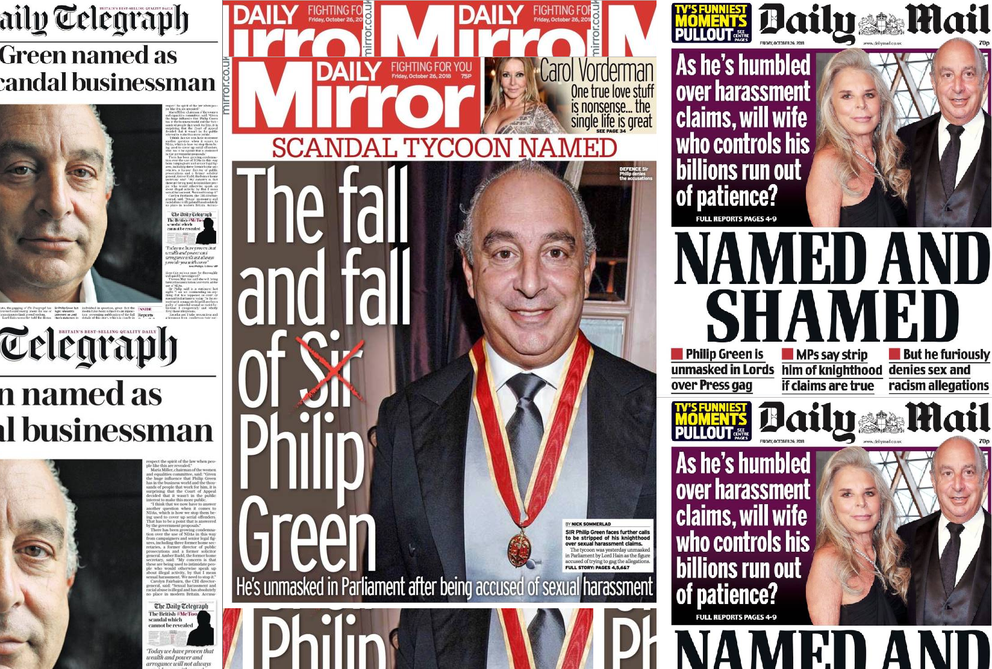 For years, the famous and wealthy in the United Kingdom were able to take out press gags permitting them to remain anonymous from the tabloid media which is quite unforgiving on the British isles.

As such, the home media was disallowed to name them in public until a verdict in their disfavor was rendered.

Thus, many cases were settled by paying off the accuser of (for example) cases of bullying or sexual misconduct without the public ever finding out who had done what.

Yesterday, a member of the House of Lords, Mr Peter Hain, used his so-called ‘parliamentary privilege’ to break that rule as he stated it was in the public’s interest to name the tycoon, known as Mr Philip Green, given the "serious and repeated" nature of the allegations of sexual assault.

Lord Peter Hain, who identified him, said it was his duty to name him, given the "serious and repeated" nature of the allegations.

Mr Green, a billionaire retail tycoon who owns Topshop and other stores, is said to have made repeated sexual assault charges towards various members of his own staff and victims had been paid "substantial sums" in return for legal commitments not to discuss their alleged experiences.

The story was brought forward by newspaper The Telegraph earlier this week but Mr Green’s legal team immediately slapped them with a press gag.

Today, given the fame of Mr Green on the British isles, the UK public realizes that it has its own sort of Harvey Weinstein case to deal with. Mr Green’s face was plastered across front pages of all major newspapers.

Mr Green, who carries the title of ‘Sir’ in the UK as he was given a knighthood by the Queen, has released a statement in response: "I am not commenting on anything that has happened in court or was said in Parliament today. To the extent that it is suggested that I have been guilty of unlawful sexual or racist behaviour, I categorically and wholly deny these allegations.”

"Arcadia and I take accusations and grievances from employees very seriously and in the event that one is raised, it is thoroughly investigated. Arcadia employs more than 20,000 people and in common with many large businesses sometimes receives formal complaints from employees. In some cases these are settled with the agreement of all parties and their legal advisers. These settlements are confidential so I cannot comment further on them."

They, the so called "elites", PERVERT and POLLUTE everything… they are such low life scum. Truly satan's minions.

Money cant buy morals and goodness. Lots of money literally makes people believe things about themselves that are not true. Delusions of grandeur and beauty. Their identities are so tied to money, that, that is why if they lose their money, they most often will commit suicide. Being so rich often leads to extreme boredom and a loss of purpose in life, or even a contempt for it. Often manifests into complete and total apathy toward self and others. Then that leads to evil behavior. And like the scriptures say… The LOVE of money is the ROOT of all evil. Notice, it says the "LOVE OF MONEY" is the ROOT of ALL EVIL, not money itself. It does not say money is evil, but the LOVE OF IT.