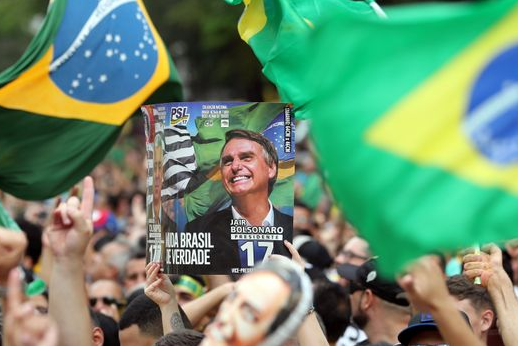 In scenes reminiscent of Ms Clinton’s failed presidential bid, the leftwing candidate, Mr Fernando Haddad could be seen this week flanked by many of Brazil’s greatest singers and composers, including Chico Buarque and Caetano Veloso, under the white arches of Rio’s Lapa samba district.

The former São Paulo mayor and candidate for the leftwing Workers Party (PT) said he was feeling a “turnaround in the air. We’re going to win the election, I have no doubt.”

Most commentators don’t believe it though, as all opinion polls point to a landslide victory for Mr Jair Bolsonaro, the rightwing evangelical candidate who was slammed for months on end in the mainstream worldwide media.

If all ends well, Mr Bolsonaro should win outright by some 60% of the votes.

And so the vote that was supposed to be about Mr Bolsonaro’s unacceptable quotes from the past has for some become an opinion poll about decades of leftwing rule in Brazil, and government that has left the country with massive debt.

For all Mr Bolsonaro’s faults, the one thing they couldn’t pin on him was the issue that outdid all of his rivals: corruption.

Brazilian voters want change. They do not trust the PT anymore. The party is being blamed for a deep recession in 2015 and 2016 and many are scathing of its continued public alignment with the discredited Venezuelan regime of President Nicolás Maduro (and even other leftwing regional authoritarian countries, such as Cuba) which Brazilians have come to view as failed states.

Mr Lincoln Secco, a historian with the University of São Paulo, admitted that “it’s not feasible any more for the PT to not tell Brazilian society what it will do to reform itself. It will have to rethink itself.”

Observers of the election campaign now state that the PT made a clinical error in insisting on Mr Lula da Silva as a candidate and then appointing Mr Haddad as his declared substitute. This gave Mr Bolsonaro the easy solution to attack Mr Haddad as being a puppet to the former president and stating that Brazil would be ruled from Mr Lula’s jail cell.

Political commentator Mr Marco Antônio Teixeira agrees, stating: “This idea that a Haddad administration would be a government formulated from prison ended up catching on very strongly.”

Whereas most have now agreed Mr Bolsonaro will win on Sunday, the real question is how much damage will be done to the left. Will they remain a force in parliament or does it become the dreaded apocalypse?

Can't wait for the junta to come back and the extrajudicial killings to resume. Based and repilled Bolsonaro