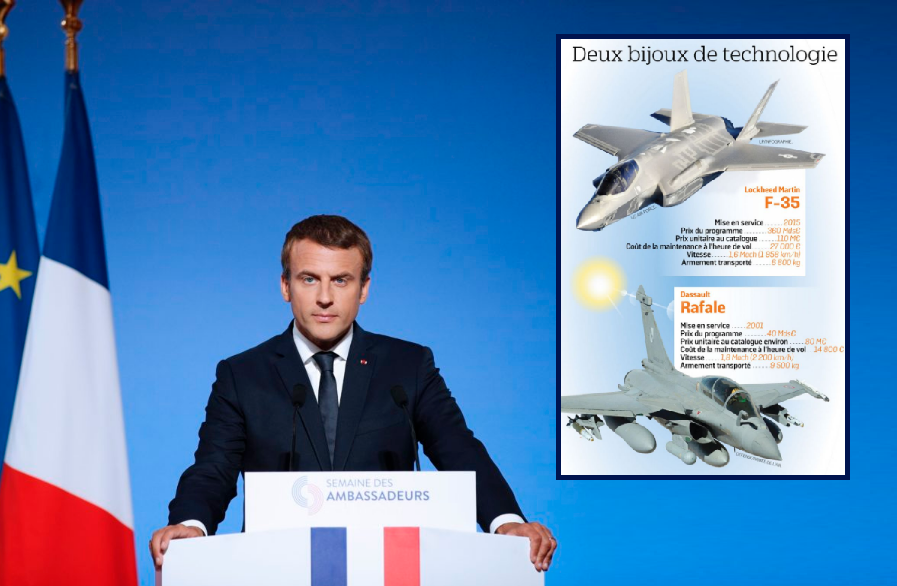 French President Macron reacted furiously to his neighbor Belgium’s choice to equip their military not with his preferred ‘Rafale’ but rather to choose for the US’s Lockheed F-35.

Although French President Emmanuel Macron and Belgian Prime Minister Charles Michel get on wonderfully, in the Belgium parliament it is normally the Flemish nationalists of Antwerp mayor Mr Bart De Wever who get to decide as they are the biggest political party in the country.

The decision of Mr De Wever to buy US-made F-35 fighter jets, addressed to the parliament yesterday by Defense Minister Mr Steven Vandeput, is said to have infuriated the French head of state.

The choice for an American aircraft instead of a rival European aircraft "strategically goes against European interests," French President Emmanuel Macron said today whilst visiting Bratislava.

"I regret this choice. This wasn't just the Rafale offer, it was also the Eurofighter, a real European offer."

"The decision is linked to a Belgian procedure, to the political constraints of the country, but strategically goes against European interests. Europe must develop a real capacity for a European defense industry, in all the countries that believe in this venture."

Although France had promised to create jobs in the southern Wallonia region of Belgium, the government announced on Thursday it would purchase Lockheed Martin's stealth jets in a multi-billion-euro deal to replace its ageing fleet of F-16s in a blow to rival French aircraft maker Rafale.

The Belgian defense minister explained that the military found that the F-35 ran superior against a bid from the Eurofighter Typhoon, developed by a European consortium that also comprises Italy's Finmeccanica and Airbus.

They want jets to fly towards the din of battle… Not away from it.

Macron, you and Jerry Brown need to cuddle up & work on the doomsday clock together. I`m so Sick of all you POS Globalist`s.

Oh so who’s a nationalist now??? Welp, I ain’t suprised, whatever, faggy Macron.

Hey Macron! I am so glad you are part of the show! Show some tears or do some fist pumping for dramatics. Perhaps an arrogant nose in the air would work best!

Bot, am I enjoying the show?

Bot, I thought I saw bomb.

Bot, I did I did see many bombs.

Anyone care for some popcorn?

The F-35 will be why we lose the next big war. Many pilots already refuse to fly the F-22 because of the mercury toxicity in its materials and oxygen system that fills your lungs with particulates.