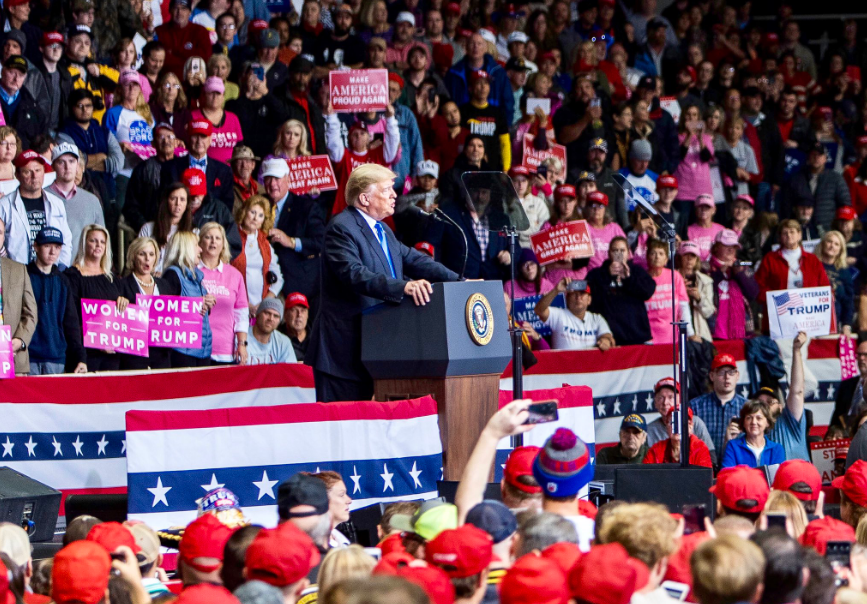 US President Donald Trump applauded his own his supporters as being “honest, principled people” during a rally in Charlotte, North Carolina Friday evening, whilst at the same time slamming the mainstream media for politicizing the actions of the Trump-obsessed man who sent a group of parcel bombs to Democratic politicians and known liberals earlier this week.

The US President stated at a press conference before the rally that his acts were "despicable and have no place in our country".

<blockquote class="twitter-tweet" data-lang="en"><p lang="en" dir="ltr">Republicans are doing so well in early voting, and at the polls, and now this “Bomb” stuff happens and the momentum greatly slows - news not talking politics. Very unfortunate, what is going on. Republicans, go out and vote!</p>&mdash; Donald J. Trump (@realDonaldTrump) <a href="https://twitter.com/realDonaldTrump/status/1055826295337172993?ref_src=twsrc%5Etfw">October 26, 2018</a></blockquote>

Just as Mr Sayoc Jr. was being interrogated, Mr Trump then spoke to his own supporters, claiming that: “We have seen an effort by the media in recent hours to use the sinister actions of one sinister individual to score political points against me and the Republican party.”

“The media has tried to attack the incredible Americans who support our movement to give power back to the people.”

“Everyone will benefit if we can end the politics of personal destruction. Political violence must never be allowed in America and I’ll do everything in my power to stop it.”

Trump was speaking in favour of Republican Ted Budd and GOP House candidate Mark Harris, who both face difficult and hard-fought races in the 6 November midterm elections. The President told the crowds to “Get them to Washington fast!”

As the crowd got into chants of “CNN Sucks!” and ‘Lock her up’ referring to Hillary Clinton, the US President warned them that ‘they’ll be writing about you tomorrow.’

"I could really tone it up. Because, as you know, the media has been extremely unfair to me and to the Republican Party.

This morning, the US mainstream media is reporting that Mr Sayoc is a registered Republican who attended several of Mr Trump's rallies in 2016 and 2017 and that he saw the US President, according to his lawyer, as a ‘father figure’.

However, Mr Trump rejected any suggestion that his words would have contributed to sending of bombs. "I heard he was a person that preferred me over others. There's no blame, there's no anything," Mr Trump said.