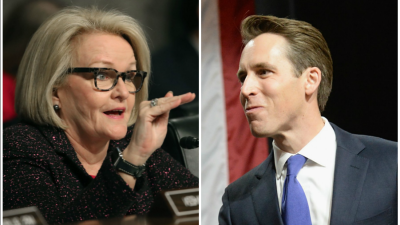 During an exchange about health care and repealing the Affordable Care Act, the gloves came off.

The Missouri Senate race is one of the most watched in the nation.

The winner could tip the majority for either party in the U.S. Senate.

“Which just shows you this whole campaign has been a big scare tactic for Senator McCaskill,” said Hawley. “It’s about scaring voters. I say we can get down costs. So I say we can cover people with pre-existing conditions, and we could do it without Obamacare.”

“I did 50 town halls,” said McCaskill, the incumbent Democrat. “You know what people talk about the most at those town halls? Healthcare. You know what I want to hold onto? All of the consumer protections that he’s trying to get rid of in court.”

The debate was hosted by KMBC and covered a wide range of issues from immigration to President Donald Trump.

“I have I supported the president, you bet,” Hawley said. “I happen to think the policies he is pursuing are good for the state when you see unemployment dropping, when you see wage growth when you see blue-collar job growth at its highest rate since 1984.”

McCaskill argued she has been able to work with Trump more than most Democrats but took issue with his style.

“That the leader of the most amazing nation in the world thinks it’s ok to lie all the time,” McCaskill said. “I mean just, lie after lie. He told the Wall Street Journal three days ago that he didn’t impose any tariffs. He needs to talk to soybean farmers in Missouri that are in the red this year.”

I guess the Senator just wants us to keep paying for all other Countries to have free trade. How does that help us in any way?

The best question of the night was about the Veritas Video, in my opinion. She dodged that question completely. She never answered it.

Hi, what would you do to stop gun violence affecting my peers across the nation, would you vote for more school funding to provide more security and will you, Senator McCaskill vote for an all-out ban like you said in last week's Project Veritas video?

Since you brought it up, let me just say about the Veritas videos, there was nothing in those videos that were bad from my perspective because people in Missouri know where I stand on these issues.

They got some kids behind closed doors talking out of school, big deal. I'll tell you what was a big deal, they fraudulently embedded themselves in my campaign for weeks, for weeks misrepresenting who they were.

They got into our computers proprietary information for 20 hours, who knows what they stole?

They weren't there to help me, they were there to help Josh Holley. And the idea that a complaint has been filed with the Attorney General's Office, and when we called to ask about the complaint they said call the campaign.

The Attorney General's Office cannot allow there to be a new normal that fraud can be committed in anybody's campaign. I don't care if it's somebody I’m for or somebody I'm against.

If somebody can come in and commit fraud and get in your computers and the Attorney General does nothing that cannot be the new normal.

I want to give both of you 60 seconds but go ahead Mr, Hawley.

Thank you, there's The Washington two-step right there!

Senator McCaskill is caught saying something on video and then she blames me. Her initial reaction was to accuse me of fraud, to accuse me personally of fraud, which is absolutely outrageous and totally not true.

And to accuse me, I just think it's again, we're at the desperation phase of Senator McCaskill’s campaign.

Yeah, you know, I'm not asking for a lot of time, by the way, he's appointed special prosecutors all the time.

He’s, his office, there have been three different articles written in the last two weeks about the mess in his office.

Right now he's in a hurry, he's never even gone in a courtroom and tried a criminal case in his life, so maybe he should be appointing the prosecutors.

But the point is that this was a fraud this isn't about the tape. People in Missouri know where I stand.

I've walked in anywhere in Missouri said come on in, ask me any question.

I'm not afraid to tell anybody where I stand.

I am afraid of an attorney general that looks the other way when somebody comes in and steals proprietary information out of somebody's computer.

I do want to ask a follow-up here, real quick so indulge me for a few moments, if you would.

Miss McCaskill, do you blame Mr. Hallease’s campaign for that video?

No, I don't blame him for that video but what I do blame him for is when a complaint is filed under the merchandize practicing Act, which he talks about and touts all the time, with a clear prima facie case has been laid out, that instead of immediately saying, of course, we'll look into it, they refer us to his campaign as if this was not a serious matter.

That's what I'm complaining about.

And Mr. Hawley, did your campaign have anything to do with that video?

Absolutely not, and to accuse me of fraud, which is what Senator McCaskill did, she said that I committed fraud, that I participated in a fraud.

She said that on television.

I didn't say that on television.

Again, it's on KOLR-10. The video is widely available. I'm sure it's being sent even now.

SoI invite you to look at the record, but these kind of desperate attacks are sad to see especially at the end.

It’s been a long 36-year career for Senator McCaskill but I hope that this isn't how she's going to go out.

After the debate, both candidates said they thought they had made a strong closing argument to Missouri voters.

“I thought this was a great debate today, a nice clear contrast,” Hawley said. “There was a lot of argument from Senator McCaskill, and I think her real argument is not with me. It's with the people of the state. And she seemed frustrated with the fact that people are unhappy with her voting record and a little defensive about it. But it's not about her and me. It's about her conflict with the people of the state.”

“Well it’s hard for me because he just kind of makes stuff up,” McCaskill said. “It is a record number of fact checks that have called his ads lies. And rather than quit saying them, he just keeps repeating them. It's hard not to get frustrated when someone keeps lying about your record.”

Well, according to the liberal biased website <a href="https://www.politifact.com/personalities/claire-mccaskill/"> Politifacts </a> the Senator lies at least half the time.

I want to see the big red tsunami knock McCaskill right out of her Senate seat.

I want to see a Big Red Tsunami knock out ALL lying, cheating, evil, violent, Democraps and RINOs. Enough is enough!

Just studying her statements and reactions to questions that out her liberalism. I find her a Social-Democrat in hiding trying to trying cover herself in enough political protective screen lotion to appeal to maybe get elected.

In short NOT TO BE TAKEN AT FACE VALVE, OR TRUST TO HONOR PROMISES.

Welp I personally think we need short terms for them 2 yrs each and Minium wages for them all none this millions that both parties all sides seem to leave with when 2 yrs is done that’s it they live like we do !,,no security nothing ….they have to live like we do !!!!